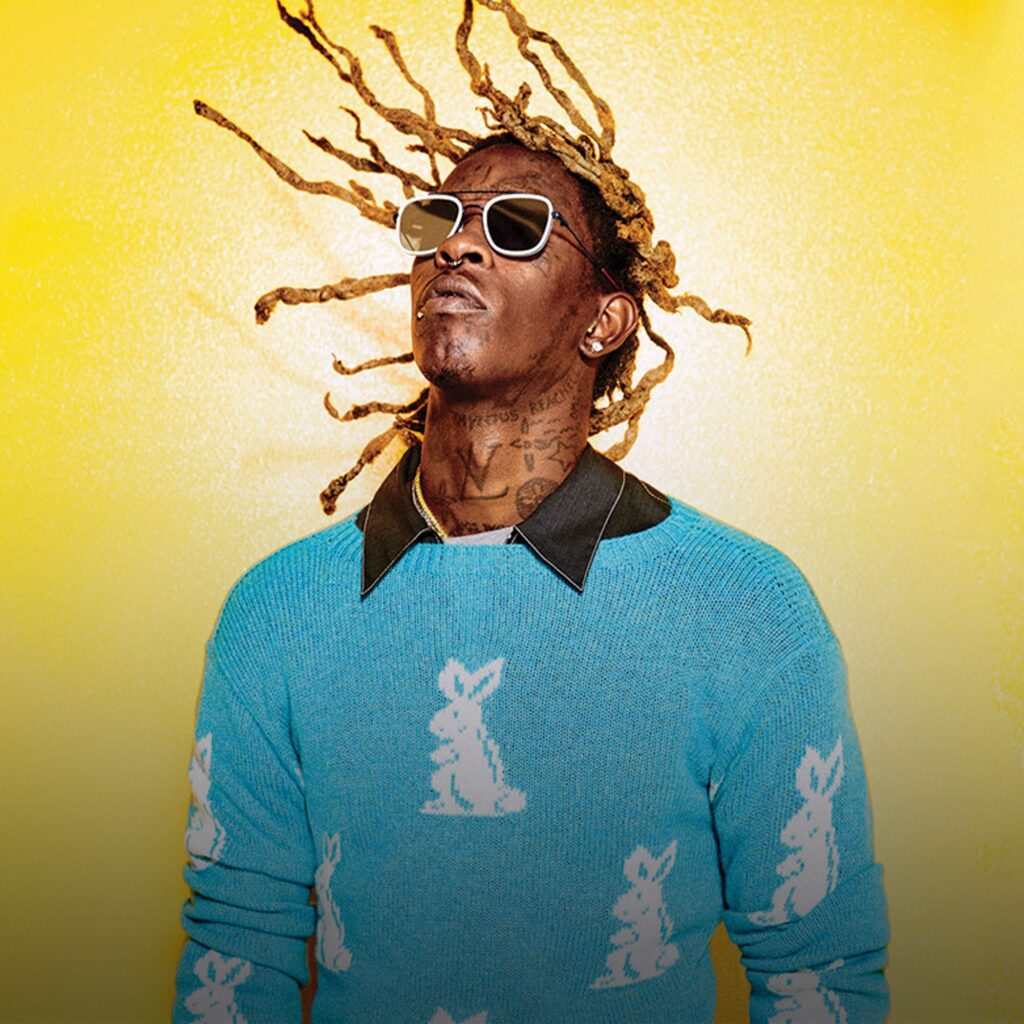 Superstar rapper and contemporary poet Young Thug has been announced as the headliner for Delirium, the annual Halloween show from A.S. Program Board. Young Thug is set to showcase his freeform, hypnotic hooks to the Thunderdome on Oct. 27th. Thug is one of the founding architects who built the modern Atlanta rap scene, which emphasizes ad-libbing techniques and using one’s voice throughout the song as a versatile instrument.

“I don’t care about people understanding me; I do it [music and fashion] for the weird ones,” Thug shared in a 2016 interview with XXL. Thug is an enigma. He rarely gives sit-down interviews with publications and only seems to showcase his personality via sporadic Instagram Live sessions. Even when Thug made a surprise appearance at Velvet Jones in late April to support fellow YSL-labelmate Gunna, he remained reserved and didn’t let his rockstar presence outshine his friend’s performance. But his unique music and eccentric fashion sense allude to the parts of his persona that are often kept hidden away.

Thug recently released the YSL-compilation Slime Language and the EP On the Rvn, both containing examples of Thug animatedly rapping over hints of pop embellishments. The track “High” from On The Rvn features Thug rapping, “All I got is a chicken for the thots” on a reworking of Elton John’s “Rocket Man.” Thug is at the apex of genre-defying music, as he often intermingles his creative sensibilities by rapping alongside the likes of pop princess Ariana Grande and indie producer Jamie XX.

He has dabbled in the art of making a rap-country album with Beautiful Thugger Girls, which offers its fair share of love songs and anthems dealing with strife and drug dependency. Barter 6 is emblematic of Young Thug’s blond era, which brought the Birdman collab “Constantly Hating” and the romantic feature “Amazing” with R&B crooner Jacquees. Thug’s cult-like following is undoubtedly due to his creativity as an artist. Even if you don’t think you would like attending a Thugger show, there’s at least one song in his discography that you can bop your head to.

For those who believe they are unfamiliar with Young Thug’s impressive catalog, you probably recall slight memories of hearing “Relationship” featuring Future in a backyard party on Trigo Road in Isla Vista, or an onslaught of Vines from 2014 featuring the rapper’s collab with Rich Homie Quan, “Lifestyle.” Travis Scott has also featured the rapper on “Pick Up the Phone,” “Mamacita” and “Maria, I’m Drunk.”

People often retreat to meme-ifying Thug’s presence and musicianship, yet Thug continues to punctuate his projects with inventiveness. He does not fit into the mold of what some people base their perceptions of rap on, but that is what makes him stellar.

Despite the news about Thug refraining from releasing music until 2019 in solidarity for his deaf brother, Thug has released a series of projects and features in 2018 and is hinting at the long-awaited release of Barter 7. Thug is at the helm of the new era of rappers turned rockstars, constantly reinventing himself while keeping the loyalty of hardcore fans. Thug will undoubtedly turn the Thunderdome into a frenzied playground of rap hits and booming basslines.

i’ve been ready for barter 7 the moment i heard barter 6. thanks for the good article. everything is so accurate

Thank you for giving Thug the justice he deserves.