The Daily Nexus
Sports
Interview With the Enemy: Cal Poly Junior Midfielder Diego Alonso
October 25, 2018 at 5:20 am by Omar Hernandez 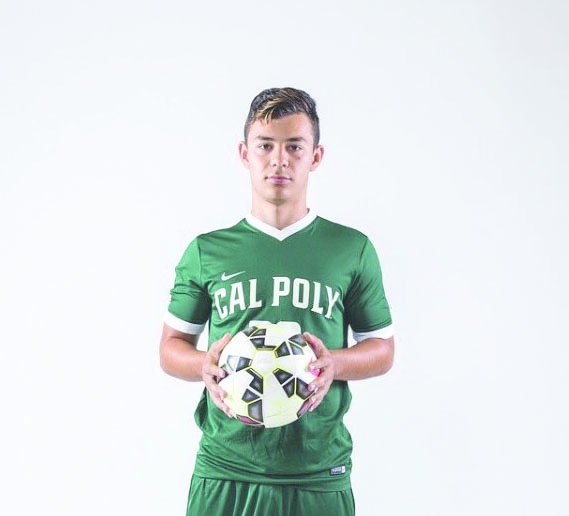 In the three years that Diego Alonso has played for the Cal Poly men’s soccer team. he’s risen from bench player to captain. While he didn’t get much playing time his freshman year, he was in the top five in assists in the Big West last year, and has become one of the best playmakers on the team.

Originally from Berkeley, Calif., Alonso progressed through the San Jose Earthquakes club system before eventually declaring for the Cal Poly Mustangs. So far this season he is third on the team in overall points and has emerged as a stabilizing presence on an oftentimes erratic squad.

In this year’s first iteration of the Blue-Green rivalry, Alonso was able to break a 0-0 deadlock 63 minutes in with a strike from 25 yards away that found the back of the net. The Daily Nexus was able to sit down with Alonso and get his thoughts on the biggest college soccer rivalry in the country, and what it’s like approaching it from a Mustang point of view.

Omar Hernandez: So you were able to break the tie and score what would turn out to be the game-winning goal in the last matchup between Cal Poly and UCSB. How did it feel to mark your own place in this historic rivalry?

Diego Alonso: It was an honor, to be honest. We always look forward to the hype surrounding this rivalry and this game, and to score the winning goal was a dream come true. Just having that sold-out crowd cheering behind me — I couldn’t have asked for a better opportunity.

OH: An interesting pattern these last few years has been the domination by the home side of this matchup. What do you think has led to this discrepancy?

DA: Obviously the home crowd is a big advantage for us. In Spanos the stands are a lot closer, so we can really feel that energy. We definitely get motivated by all the chants you guys yell at us at Harder (Laughter), but the feeling of being in front of the home crowd is a different level.

OH: You sure the tortillas don’t make a difference?

DA: Well we don’t do much of that over at our place (Laughter). But yeah, whenever we get fouled or a throw-in by your guys’ sideline, we definitely know those tortillas are coming.

OH: Getting on a more personal note, what does this rivalry mean to you?

DA: I actually didn’t know about it when I first committed to Cal Poly. But just seeing it from the bench my freshman year really showed me why people consider it one of the biggest rivalries in the country. These games have a professional atmosphere, and even though they’re regular-season games, they feel like a finals or postseason matchup. We always say that the Blue-Green rivalry has to stay green, so playing in it you feel like you’re not just playing for yourself or your teammates but for the pride of the whole school.

OH: I don’t want to get you in trouble with Coach Sampson, but what is some of the strategy you guys have talked over heading into Saturday? Both you guys and the Gauchos seem to play a similar style of soccer.

DA: We try to do what the matchups command. So… [with those] last few games against CSUN and Sac State, our philosophy was keeping the ball on the ground and playing with our brains. When we play UCSB, we know that you guys have that height at the center-back. We know that games like those can get real chippy and physical, so going into SB, we didn’t talk too much strategy. We just know we have to win every ball in the air, win those 50-50 balls and just win the physical battle.

OH: Alright, you gotta settle one thing for me: Whose campus is better?

DA: I’ve actually never been to UCSB’s campus so I can’t really speak to that (Laughter).

OH: Alright, whose city? Santa Barbara or SLO? Be honest with me; there’s a right answer and a wrong one.

DA: Alright, I’ll give it to Santa Barbara on this one.