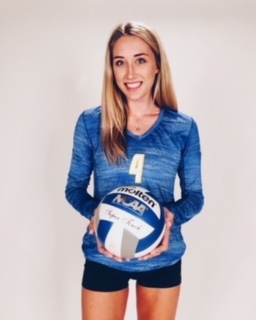 In 2015, after only six matches, Lindsey Ruddins endured injuries that ended her first year; however, the Laguna Niguel native bounced back after medically redshirting for the rest of the season.

Following her recuperation, Ruddins recorded one of the most impressive seasons for a freshman in Gaucho history. Her 2016 campaign saw her collect All-American honors as well as Big West Freshman of the Year. The adversity of season-ending injuries is enough hardship to overcome in the first place, but Ruddins didn’t let that stop her from continuing her early success.

In 2017, Ruddins’ battle with injuries returned to a lesser extent. Yet she persevered again, rising to the top of NCAA charts in individual accolades. With a 5.84 kills per set average, she led the country and earned All-Big West First Team, All-Pacific South Region First Team, Team MVP and AVCA All-America honorable mention.

This season, Ruddins has been racking up awards while consistently sitting at the top of NCAA DI rankings for attacks per set and kills per set. The redshirt junior somehow stays modest in the midst of such outstanding achievements and stresses that her team remains her focus. Recently, Ruddins earned her fourth Big West Player of the Week award of the season.

Calvin Thrift: You obviously have a high usage rate when you’re on the court. With your history of injuries, is there a fatigue aspect that you talk about with your coaches before games?

Lindsey Ruddins: My coaches are super understanding and try to manage my shoulder so that I’m not super sore or anything going into a game, but a lot of that is taken care of in the training room, like icing.

CT: You snapped a losing streak recently, but when you’re in the middle of a rough patch — like losing two games to Big West teams — do you approach the coming matches any differently?

LR: Definitely losing two games in a row sucks, but I think our team is confident, and Hawai‘i and Cal Poly are two great teams. But I think we go into every game prepared and ready to play.

CT: This season your sister, Gigi, joined the team. What’s that been like playing together?

LR: It’s a lot of fun. I wasn’t sure how it was going to be, but I’ve really enjoyed it. She’s super fun to play with; she’s super high energy all the time.

CT: If you could play any other sport what would it be and how do you think you’d do?

LR: Oh, gosh. Probably soccer, just because I used to play that when I was younger. But I don’t think I’d do very well. I was a midfielder but I’m not good at running anymore.

CT: How long have you been playing volleyball?

CT: How does mental health play a role within your training and game schedule when you’re trying to balance your social life, school and also playing a Division I sport?

LR: The team has a lot of people we can talk to and meet with. We have a sports psychologist who we can meet with at any time. Also, just having supportive teammates who are always there for you makes it easier to balance everything.

A version of this story appeared on page 9 of the Oct. 25th print edition of the Daily Nexus.