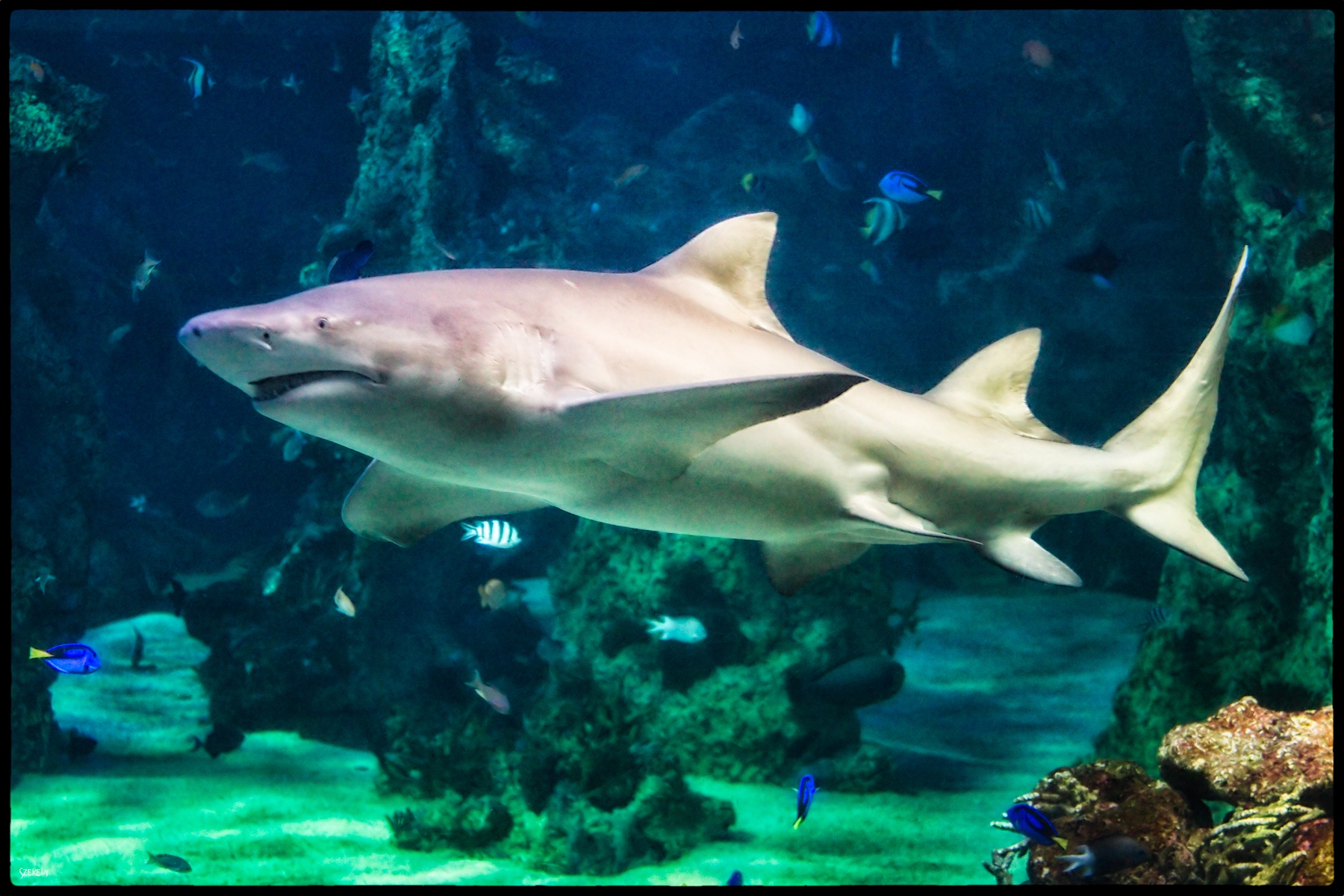 White sharks tend to stay in shallower waters close by the shore, including near Southern California beaches, but have been spotted swimming in open waters at depths of up to 3,900 feet. / Courtesy of Wikimedia Commons

Researchers at UC Santa Barbara have made developments for a relatively new technique to track sharks with a sample of water. Specifically, they set out to create a more sensitive surveillance assessment specific to white sharks. They have done so using environmental DNA (eDNA), or genetic material collected from the environment, rather than directly from an organism.

“eDNA has been used for several years to track invasive freshwater species like the Asian carp and bullfrog. People are now starting to use it in the ocean,” Kevin Lafferty, a marine ecologist of the U.S. Geological Survey and UCSB’s Marine Science Institute, said.

With a new and more sensitive eDNA technique developed by Lafferty’s UCSB colleague Christopher Jerde, the tracking of many white sharks in Carpinteria by CSU Long Beach’s Christopher Lowe and the help of researchers from Central Michigan University, Lafferty said they decided to “give it a go.”

“We wanted to see if we could detect white sharks from a water sample using eDNA,” he said.

Their research, “Detecting southern California’s white sharks with environmental DNA,” of which Lafferty is lead author, appears in the journal Frontiers in Marine Science.

Using eDNA provides an alternate technique to monitor sharks, in contrast to the more common approaches of tagging or direct observation. Most sharks are untagged, and poor observation conditions or infrequent sightings of white sharks can hinder adequate surveillance of white sharks by drones or aircraft.

“eDNA works even when the water is not clear and you don’t have to catch the shark to track it. It should work with any species that sheds DNA into the water and has a unique DNA code (which is pretty much any ocean plant or animal),” Lafferty said.

When animals swim, they slough off skin and mucus that contain their genetic information. The DNA remains in the environment as a “genetic plume” even as the material breaks down over time and can be extracted by filtering the water. Using Polymerase Chain Reaction (PCR) to copy the genetic information millions of times, the DNA can then easily be sequenced and read, informing the researchers what species have been in the area.

“For our study, we used a technique called digital droplet PCR, which isolates each individual piece of DNA. This is helpful when the DNA you are looking for is really rare,” Lafferty said.

Lafferty and his colleagues detected white shark DNA at the site in Carpinteria where the sharks had aggregated and did not find it a mile up the coast, where there had been no reported sharks, confirming they could use eDNA to detect white sharks. 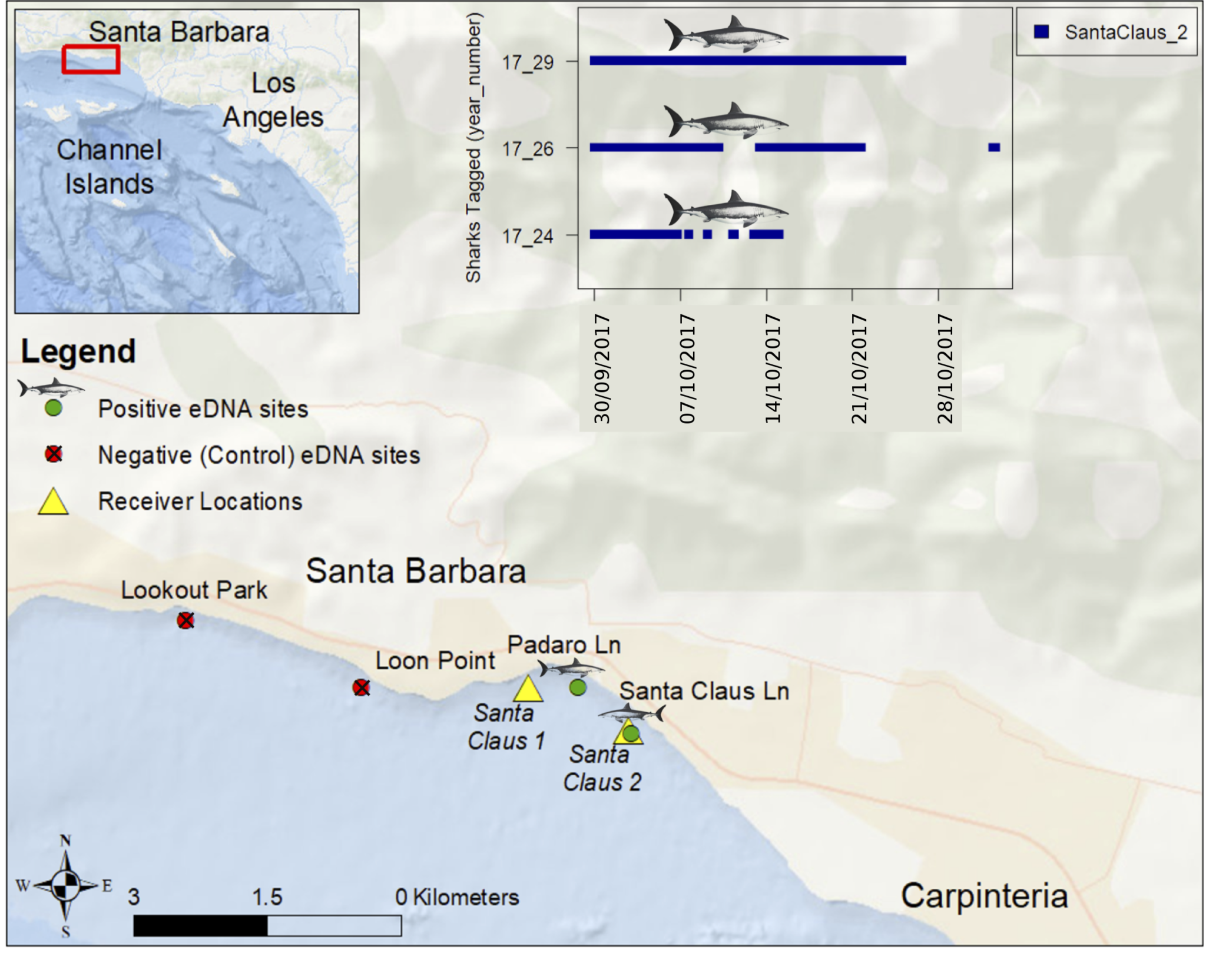 The figure shows sites near Carpinteria, Calif., where Lafferty and his colleagues tested whether they could accurately detect white shark eDNA. They tagged six juvenile white sharks with external acoustic transmitters at Padaro Lane and deployed two acoustic receivers as part of a long-term monitoring program. The inset figure shows the times and dates when three tagged juvenile white sharks were detected at the Santa Claus 2 acoustic receiver location. / Courtesy of Kevin Lafferty

Presently, white shark populations are increasing after having been placed under protection decades ago due to overfishing. Southern California beaches serve as nursery habitat for juvenile white sharks, especially during the summer and fall period, so shark interactions with beachgoers may become more frequent. Although the chances of a shark bite are slim, sometimes the creatures may mistake a human for their usual prey — including seals and stingrays — or otherwise be provoked. Therefore, eDNA could play a part in informing public safety and conservation planning.

“We might one day be able to assess whether there have been white sharks swimming at your local beach, giving you the choice to stay out of the water and avoid a conflict with a shark,” Lafferty said.

He hopes to expand the usage of the method to begin monitoring when and where sharks swim in Southern California. As white shark populations recover, eDNA could help with mapping white shark distributions and non-invasive tracking for fishery coastal assays.

“Humans worry about white sharks, but the animal that seems most at risk to them is the southern sea otter,” Lafferty said. “Most otter deaths are now attributed to shark bites. By learning where sharks like to hang out, we might be able to find safe havens for sea otters to recover.”

Although eDNA usage is still in its infancy and must consider concerns including degradation over time and cross contamination, the results of Lafferty’s research show it is a promising tool with widespread applications for accurate monitoring.