Navy blue T-shirts with eye-catching white block letters that spell out “AMERICA SHOW ME YOUR HANDS” have recently begun populating the UC Santa Barbara campus. Jalia Carlton-Carew, the artist behind this emphatic design, released the shirts to the public last Friday.

On the surface, Carlton-Carew, a third-year film and media studies major, appears to be a typical college student. In her free time, she enjoys listening to different rap artists, watching movies and participating in on-campus clubs. 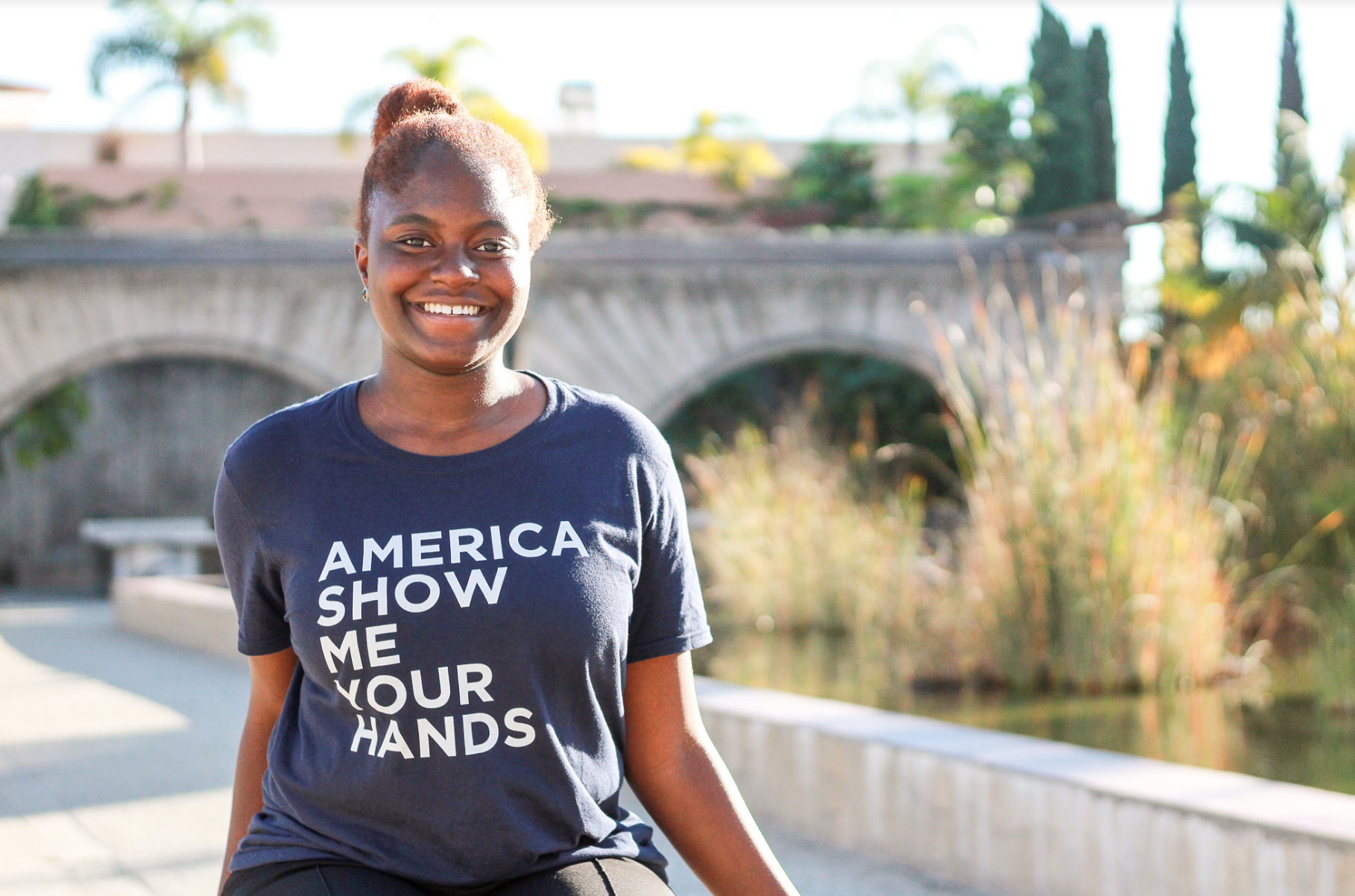 As her following grows, Carlton-Carew, who designs the merchandise with her mom, aims to expand her products to include both hats and laptop stickers. Sanya Kamidi / Daily Nexus

However, when given the opportunity to sit down and get to know her on a deeper level, it is clear that Carlton-Carew is anything but ordinary.

In addition to being the president of UCSB’s Women’s Ensemble Theatre Troupe, Carlton-Carew serves as first pro-tempore and off-campus senator for UCSB’s Associated Students (A.S.)

She grew up in Atlanta, Ga., and loves creating films. Now, Carlton-Carew can add fashion designer and human rights advocate to her resume.

The T-shirts were created by Carlton-Carew to promote the upcoming premiere of her documentary series, titled “America Show Me Your Hands,” which will be released on YouTube within the next few weeks.

“It’s going to be a mini docuseries that will analyze certain social issues going on within America and what Americans think we should do to fix those issues that are occuring within our environment or our community,” Carlton-Carew said.

“It’s really just about holding each other accountable for our future.”

When asked about the meaning behind the phrase “America Show Me Your Hands,” Carlton-Carew said she associated it with a mother catching her child sneaking a cookie from the cookie jar and asking them to show her their hands.

The series will be comprised of short 15-minute films. It will spotlight relevant social and political issues circulating the country including sexism, racism, healthcare, affordable education and housing, among other topics.

The first episode will address xenophobia, the dislike or fear of people from foreign countries, a topic that is one of personal interest to Carlton-Carew, whose parents are both from Sierra Leone, West Africa.

A large portion of the episode will highlight the effects of Temporary Protected Status (TPS) on its recipients.

“Temporary Protected Status allows certain people from certain countries to come to America if they’re seeking asylum, or their country experienced natural disasters or if it is unsafe for them to be there,” Carlton-Carew said.

Carlton-Carew, whose mother came to the United States under TPS in the 1990s as a result of the Sierra Leone Civil War, experienced firsthand the confusion that arises among the recipients when their status is terminated.

Prior to President Trump’s administration, when a country that was originally granted TPS was deemed safe once again, the government would notify the recipients but then fail to enforce any action to send them back to their native country.

They also would not provide them with the steps necessary to apply for citizenship in America, according to Carlton-Carew.

Currently refugees from Haiti, El Salvador, Nepal and Honduras who have sought refuge in America to escape natural disasters and violence within their countries have been notified that they need to leave between 2019 and 2020 or face deportation, according to Carlton-Carew.

Through “America Show Me Your Hands,” Carlton-Carew aims to promote transparency and accountability between Americans in regards to these intense topics.

“I want empathy; I want people to be able to understand each other’s situations. The only reason why I am where I am today is because Americans in my community didn’t look at my mother and I as strangers … they embraced us as Americans should do and they made sure that we felt welcome,” Carlton-Carew said.

The first episode will consist primarily of Carlton-Carew’s own story in regards to xenophobia, along with news clippings and photos of children from Honduras and Nepal that she received from a photographer who traveled there.

The following episode, tackling affordable housing, will feature testimonials from college students who recognize the issue in their society and have begun taking steps to effect change in their community.

Carlton-Carew wanted to create the film series during her first year at UCSB. However, it was only recently that she decided on a specific format and film topics and began to act on her ideas.

“I started getting more involved in politics, and given our political climate I thought this was the most appropriate time. I couldn’t sit on this idea any longer –– I had to pursue it,” Carlton-Carew said.

Her decision to become involved in A.S. was largely a result of her desire to see more film major representation within Senate.

As first pro-tempore and off-campus senator, Carlton-Carew aspires to not only be a liaison between the student body and their senators but also to promote increased opportunities for student filmmakers.

Carlton-Carew hopes to reach young adults with her T-shirts and documentaries in an effort to empower them.

“I just want to empower young people to take charge of their future. By interviewing them, it puts them on a platform to engage with other people who might find [their stories] interesting.”

As her following grows, Carlton-Carew, who designs the merchandise with her mom, aims to expand her products to include both hats and laptop stickers.

“I want people to [see my shirt] and think about what it means,” Carlton-Carew said. “This is our future … America, show me your hands.”

How is this activism when the seller isn’t even transparent about the supply chain of these t-shirts for consumers?

What do you mean? I don’t understand the purpose of this comment.