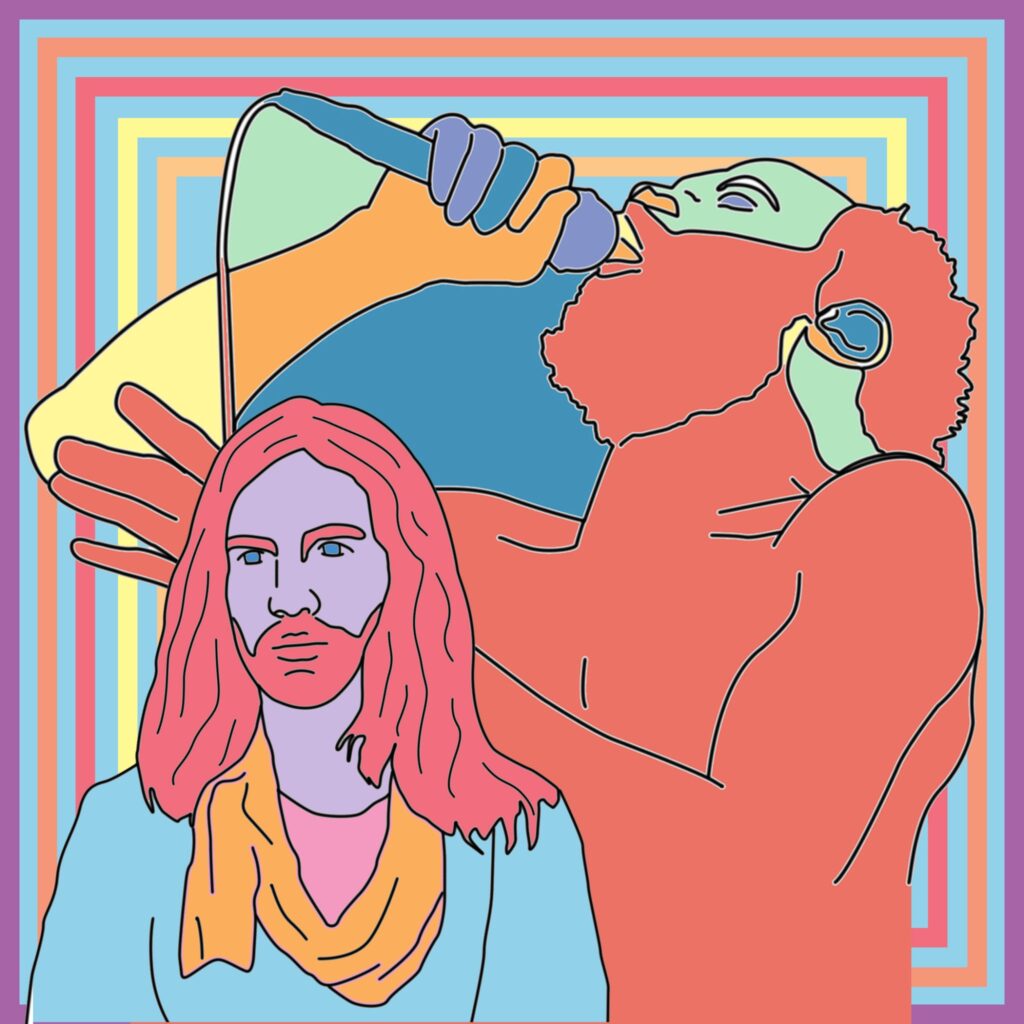 Back for another year of stoner hippie magic, the Desert Daze music festival left quite a mark on its attendees this year. With exciting headliners such as indie gods Tame Impala, classic shoegaze act My Bloody Valentine, and Australian psych-pop band King Gizzard & the Lizard Wizard, this three-day festival seemed like the perfect escape into a psychedelic wonderland.

As I was driving myself out to Lake Perris, Desert Daze’s new location, I got a phone call from one of my housemates telling me that she had been waiting in line for parking for over an hour. By the time I finally made it all the way out there myself, I recognized instantly what she was talking about. The line of cars waiting to get into the festival spanned over a mile or two until you couldn’t see where the line ended.

Eventually, I noticed more and more people either turning their cars completely off because of the stand-still, inescapable traffic or sparking up some joints to pass the time while they remained prisoners in their cars. Jocelyn Guardado (@GuardadoJocelyn) even wrote via Twitter, “First and last desert daze. Car ran out [of] gas from the long line. I love waiting in this heat so that my boyfriend can walk two miles to the nearest gas station.” Although Guardado’s case is unfortunate, several others claimed to have waited as long as four hours and still missed most of the Friday performances.

Once inside the venue, it was clear the anger from trying to park had vanished and most festival goers were once again excited for the music. Although Desert Daze, as the name mentions, is normally held in a desert setting, the festival this year made its debut at Lake Perris. It gave off an adult summer camp feel, with campsites across the lot, a beach to swim in and an amazing view of the Moreno Beach mountains. Festival attendees could be seen frolicking in the water as bands played their sets right next to them. In addition to the beauty of Mother Nature that engulfed Desert Daze, several fun food vendors and other booths were scattered throughout the festival grounds.

Like Coachella and other music festivals, Desert Daze had multiple stages: the Moon, the Block, the Theatre, the Sanctuary and the Mystic Bazaar. Besides the Bazaar, which was for campers only, each stage was relatively close to one another, making it easy for attendees to hop from band to band and view insane, Instagram-worthy art installations along the way.

Although it was apparent most attendees were mainly excited to see Tame Impala, the rest of the bands on the Friday lineup didn’t disappoint. Lesser known artists like Idles, Hinds and Jarvis Cocker shone as old and new fans alike were captivated by their performances, often taking small breaks from dancing to light up and drink. More interestingly, though, was the performance of Warpaint, who took the stage right before Tame Impala. Their psych-rock sound, in combination with the feminine edge that comes exclusively from a girls-only band, seemed to call each person to the stage with their hits like “Elephants,” “Undertow” and “Disco//Very.”

As the sun began to set on the first night of Desert Daze, the weather became noticeably colder and more people could be seen retreating to their cars to grab jackets, hats and more joints. Though the main stage had been previously occupied by fans enjoying the sets of Warpaint and Pond a couple hours earlier, the Moon Stage was now filled to the max with agonizing anticipation of Tame Impala’s performance. However, it wasn’t until lightning started to strike that the excitement grew.

Scheduled to perform at 10 p.m., Tame Impala entered the stage about 10 minutes late, beginning with their song “Nangs” accompanied by trippy, psychedelic visual art that covered the screens surrounding the band. As the rain began to pick up and lightning became more frequent, Tame Impala quickly jumped into “Let It Happen,” inciting the whole crowd to collectively jump and sway their heads side to side to the familiar and well-loved song. As the long instrumental break blared out of the speakers, my view of Kevin Parker diminished as I got lost in a cloud of weed and vape smoke coming from my fellow standing neighbors.

While Tame Impala played for as long and well as they could, they were no match for the storm that was to come. The flashes of lightning continued to get so much brighter and more frequent than before that festival attendees began enjoying the scene, fully immersing themselves in the chaos of music and nature combining into one coherent experience. So, when the music stopped after 20 minutes and Parker said, “Sorry guys, we gotta go,” it was clear no one had anticipated this short ending. One of the festival coordinators then came out and assured fans that Tame Impala would come back out after the weather cleared up but that everyone was urged to seek shelter in cars or buildings. In the end, though, the Tame set was canceled as well as every other act scheduled to perform after them — and fans were pissed.

In an attempt to make up for the unforeseen weather disturbances during Friday, Desert Daze gave everyone free parking for the weekend and allowed attendees with Friday tickets to enjoy the festival on Saturday as well at no extra charge.

When Saturday morning finally came around, the rain, lightning and thunder had ceased, creating a cool forecast for festival goers to enjoy throughout the rest of the weekend. To close the show, Death Grips and My Bloody Valentine performed back-to-back, giving audience members unique takes on what psychedelic music can sound like. While Death Grips gave a rather exciting performance, never taking any breaks during their set, My Bloody Valentine really brought it home with their signature garage rock playing that incited enormous response from the crowd. This was especially apparent during their song “Soon,” to which many fans began jumping and throwing elbows and fists as a form of dancing.

Though there were some pretty big hiccups with the organization and execution of this festival, Desert Daze still gave its attendees a great playground to meet new people, camp, swim and, of course, enjoy the music.

Hopefully, they will look at the weather report next year!

Sorry to hear the whining about the long line to get in to Desert Daze. Those of us that showed up early had no more than a 30 minute trip from the main road to security. Not mentioned here was that on the second day we were just waved through, as was also true Sunday. And running out of gas in line makes me wonder how Jocelyn planned on getting home. The concert was a gem; the site was Shangri-La to last years’ Hades of Dust. The Sanctuary was one of the best non-concert sites I’ve ever experienced. Warpaint, Earthless,… Read more »