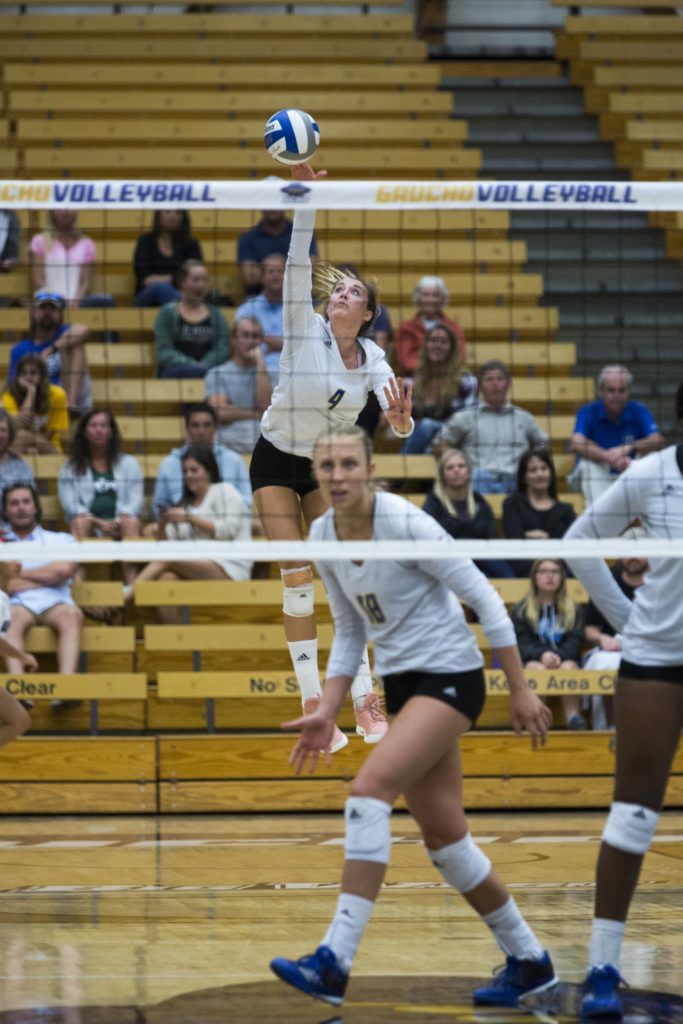 There’s one team to beat in the Big West this year, and it’s the Cal Poly women’s volleyball team. Sitting at 16-1 overall and 6-0 in the conference, the No. 12 ranked Mustangs have rocketed out to one of their best starts in program history.

On Friday night, the UCSB women’s volleyball team will get its chance to come at the queens of the conference in the Blue-Green rivalry matchup in San Luis Obispo. The Gauchos, at 12-7 and 4-3, won’t be favored, but they’ll certainly be motivated to finally bring the Mustangs down.

The conditions are mostly right for UCSB to have a chance at the upset. The Gauchos have had a full week of preparation and are coming off of both a strong sweep of CSUN last Tuesday and a hard-fought 3-2 loss to Hawaii on Friday.

The latter match, while a loss, should embolden the Gauchos when it comes to their ability to hang with the Big West powerhouses. Hawaii is just a step behind Cal Poly in the standings at 9-6 overall and 5-1 in the conference, with that one loss at the hands of the Mustangs last Saturday.

Any additional confidence UCSB can take into their Friday match will be a help against one of the nation’s highest ranked programs. Cal Poly is working on a 15-game win streak and has dropped only one set across their six Big West matches so far.

Facing a juggernaut like the Mustangs, taking even a set on Friday night would be an accomplishment for the Gauchos. To take the match, UCSB will likely have to play better than it has all season.

Such a performance starts at the top, with star outside hitter Lindsey Ruddins. The powerhouse of the team, Ruddins is second in the nation in kills per set with 5.39 and boasts a career-best .271 hitting percentage.

Cal Poly is largely unique among Big West programs in that they have a counter to Ruddins. Junior outside hitter Torrey Van Winden’s 5.07 kills per set is sixth-best in the nation, and her .369 hitting percentage is tops in the Big West. She’s both powerful and precise, and a pain to stop as a result.

It might be a pain but stopping or limiting Van Winden is a key to victory against the Mustangs. Van Winden had her worst match of the season against Pitt in Cal Poly’s lone loss, hitting just .108 and mustering 3.25 kills per set, her second worst mark of the year.

It will be a good sign for the Gauchos if they’re even in a position where they need to stop Van Winden. Throughout Big West play, the junior has had somewhat sparing usage in the Mustang attack, taking on more of the attacking load only when necessary, like with her 64 attacks and 29 kills against Hawaii.

Cal Poly’s other attackers, such as Torrey’s older sister, Adlee, have handled more of the attacking function in the team’s other Big West matches. UCSB’s task defensively will be to neutralize those attackers and then neutralize Torrey Van Winden, something no team other than No. 6 Pitt has been able to do all year.

UCSB has shown it can put in the work on defense so far in the Big West, which will be essential when it comes to stopping that Mustang attack. The Gauchos lead the Big West in digs per set with 18.50, best by over a full dig. Blocking hasn’t been quite as much of a strong suit, so the team will have to rely on that digging process to respond to Cal Poly’s strikes.

Offensively, UCSB will have to continue to show off some of its newfound balance. The Gauchos boast four different players with over two kills per set, with Ruddins, her sister Gigi, Torre Glasker and middle blocker Charlie Robinson comprising the list.

That continued versatility is crucial to any chance of Gaucho success in the Blue-Green rivalry. Without it, the Mustangs will be able to key in on Ruddins, greatly simplifying their defensive responsibilities.

There’s a lot that needs to go right for UCSB to even have a chance of scratching the first blemish into Cal Poly’s Big West record. That’s to be expected when taking on No. 12 team in the nation, one that hasn’t lost a match since August and has dropped just four sets since the start of September.

If the Gauchos manage to dig their way out from under the Cal Poly attack and keep the Mustangs on their back heel with a varied attack of their own, they’ll be putting themselves in position to come back from San Luis Obispo with a season-defining win. That’s what it takes to stop a stampede.