The Daily Nexus
News
Student’s Artwork Becomes Popular At UCSB Via Twitter
October 11, 2018 at 12:20 am by Katie Wolf

“I’m 19 years old and from Orange County and I’m just tryin to get exposure for my art. A simple like or retweet could really help me.”

This tweet, accompanied by four pictures of charcoal drawings depicting Chance the Rapper, Kendrick Lamar and Tupac, among other artists, is what captivated UCSB students’ interests in Brittney Danh’s unique artwork earlier this year. 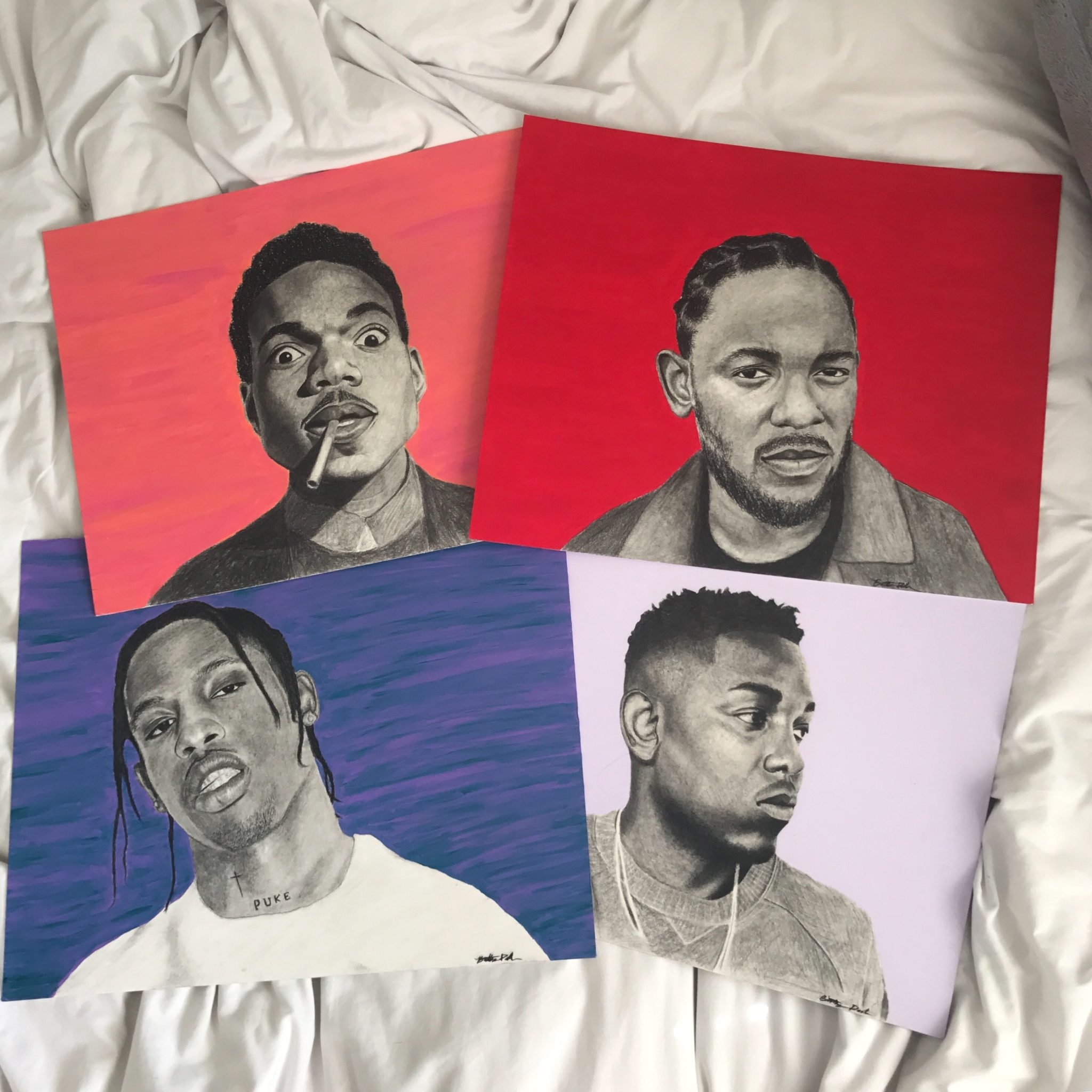 Danh’s mother is one of the people that influenced her artistic abilities. Growing up, she recalled her mother frequently painting using acrylics on canvas. Courtesy of Brittney

Danh, a second-year economics and accounting major and art minor, quickly realized her passion for drawing famous hip hop and rap artists when she took her first art class during her junior year of high school.

“I had to take an art class to graduate, and I did this project with white charcoal … I [drew] a picture of Drake and everyone was hyping me up,” Danh told the Nexus.

What makes Danh’s work stand out among other artists is her use of both black charcoal and acrylic paint, a combination that is rarely paired together because of the risk of accidentally blending the two mediums.

The tweet that launched Danh’s business received 2,000 retweets in three days and spurred an influx of orders into her direct messages.

Those who decide to order merchandise off from Danh have a choice of either original copies, prints or stickers, with prices that vary depending on the size and type of product.

Danh’s drawings of Kendrick Lamar and Chance the Rapper sell the most prints, while the Tyler the Creator and Frank Ocean stickers sell out the fastest, according to Danh.

“I get asked a lot [why I draw primarily black people], and it’s because I listen to hip hop, which is [sung by] mainly black people,” Danh said. “I like to draw influential figures.”

The hardest part about drawing portraits of people is finding the perfect photo to use as inspiration, Danh said. It took her one year to find a picture of André 3000 that was “high quality, smooth and look[ed] nice enough to draw.”

Danh keeps the majority of her original artwork in hopes of getting it signed or even giving it to the artists themselves.

“YG had a meet-and-greet in Irvine and I waited nine hours to see him…he signed [my art] and gave it back,” she said.

In other instances, Danh’s artwork made a greater impact on the artists she presented it to.

“I went to [Isaiah Rashad’s] concert, and he kept [my art] and gave it to his mom, [I know] because she tweeted me,” she said.

Danh’s mother is one of the people that influenced her artistic abilities. Growing up, she recalled her mother frequently painting using acrylics on canvas.

Mariella Angela, an Instagram-famous artist who uses the handle @itsmariel, has also been one of Danh’s inspirations for many years.

“When I started drawing I found her Instagram… She had art shows in L.A., celebrities [were] buying her [work] … I see that, and I want to get to that level of success,” she said.

Danh’s dream is to one day follow a similar path as Angela and make a living off of her art, but she recognizes that she would have a more stable future following a career in economics and accounting.

In addition to Twitter and Instagram, Danh also uses Isla Vista to publicize her artwork. In the past, she has sold her products at I.V.’s Open Market held at Little Acorn Park, an event she plans to return to on Oct. 20.

Although Danh is a relatively new artist, she said her skills have become refined and sharpened since studying art at UCSB because of the increased exposure she has had to various art supplies.

“I think I was just so stuck for a while in the type of art supplies I had, and I was just too scared to branch out,” Danh said.

Art is oftentimes a healthy creative outlet for Danh in the midst of the stresses that both college and a part-time job bring to her life.

“Sometimes I’ll draw for like five hours and it’ll feel like one… It’s calming in a certain way,” she said.

For Danh, the best part of being an artist is seeing how people desire to own her work and how happy it makes her when she completes a drawing.

“The fact that I created it, that I like it, that it’s how I wanted it to look, [that’s the most rewarding part],” Danh said.

Oh, an advertisement disguised as a news article. Welcome to reporting in 2018.