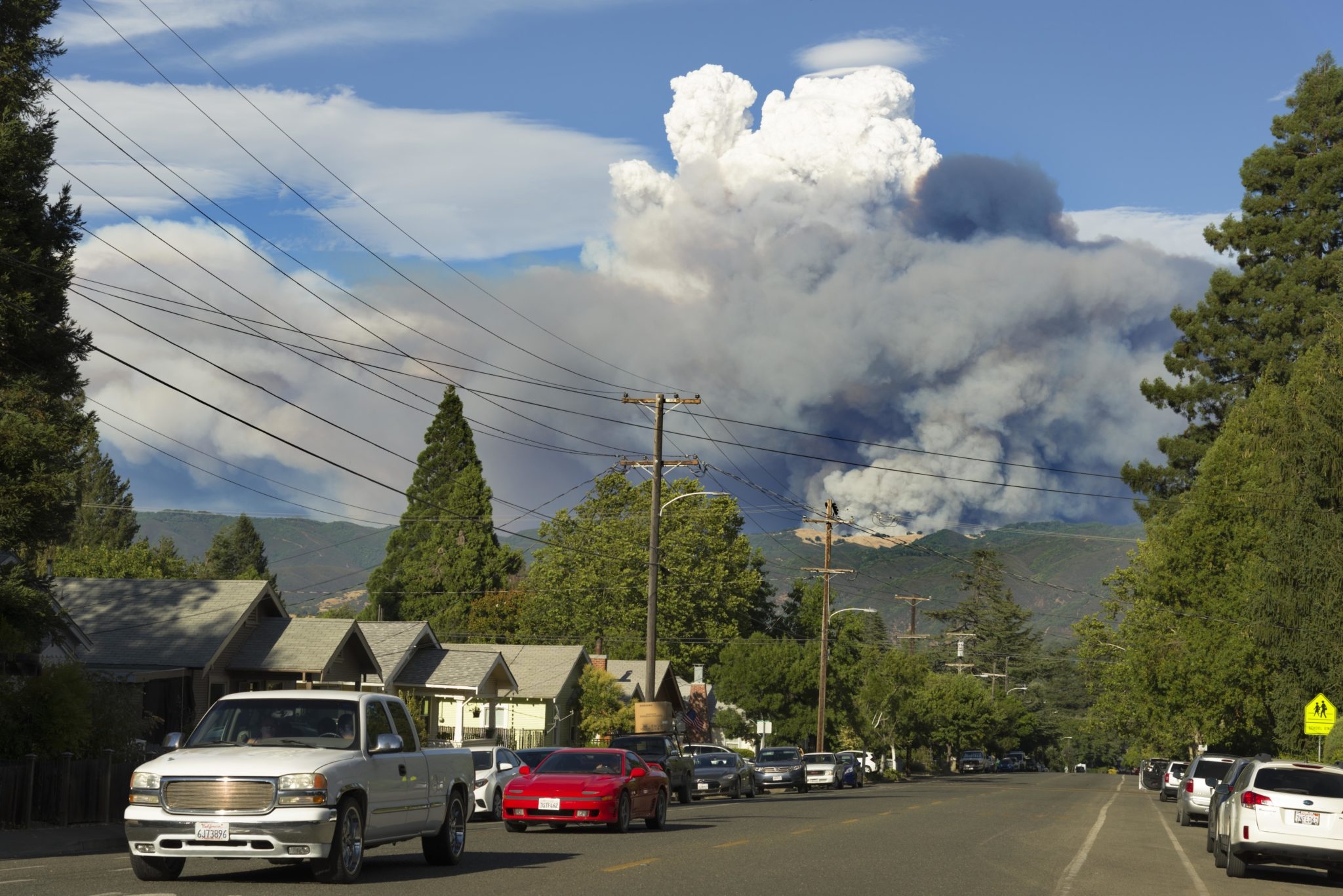 A huge plume of smoke is seen in the distance in Mendocino County from the Mendocino Complex Fire in late July 2018. Consisting of two wildfires, the River and Ranch Fires, the complex fire burned a total of 460,000 acres, destroying 280 structures and resulting in one fatality before they were 100 percent contained on Sept. 18. / Courtesy of Wikimedia Commons

California’s wildfire season began earlier than usual in 2018, with the Mendocino Complex Fire burning nearly 460,000 acres total beginning in late July. It surpassed the Thomas Fire, which occurred during December of the previous year in Santa Barbara and Ventura, to become the largest recorded wildfire in California’s history.

With greater intensity and frequency in wildfires occurring in recent years, scientists at UC Santa Barbara’s Bren School of Environmental Science & Management have partnered with the National Center for Atmospheric Research (NCAR) to study this concerning progression. Looking at trends in El Niño — Southern Oscillation (ENSO) — a natural climate cycle that affects heat distribution, precipitation and winds on a worldwide-scale — the researchers are exploring how climate change affects ENSO and how, in turn, that impacts environmental events like wildfire frequency and heat waves.

Their research appears in the journal Geophysical Research Letters.

ENSO consists of the opposing phases of El Niño and La Niña. During El Niño, trade winds push warm waters that eventually reach the eastern Pacific Ocean, resulting in warmer-than-average temperatures in that region. Its counterpart, La Niña, generates below-average temperatures in the eastern Pacific. This climate phenomenon has far-reaching consequences, including creating droughts in some areas and causing flooding in others, affecting integral human processes including agriculture, fishing and fire and flood prevention.

“We still don’t know how climate change will affect the overall strength of ENSO, since climate model projections are pretty much evenly split on whether it will strengthen or weaken in the future. But what we were able to show in this study is that models do agree on how wildfires will be impacted by El Niño and La Niña events of a given magnitude,” Samantha Stevenson, co-author and an assistant professor at UCSB, said.

“In other words, we may not know exactly how big future El Niños and La Niñas may be, but we do know that their effects on wildfire will be amplified by climate change,” she said.

Stevenson and her team used two climate model simulations, developed at NCAR and at the NOAA Geophysical Fluid Dynamics Laboratory. They each described atmospheric, land and oceanic conditions at every point on Earth throughout the course of the 20th and late 21st centuries. With large “ensembles” that had previously been run with each of these climate models beginning at nearly identical initial climate states, the models were run numerous times over to see how random noise affected the behavior of the climate system. The two models ended up showing very different future behavior of ENSO: one predicting future ENSO strengthening, the other predicting weakening. 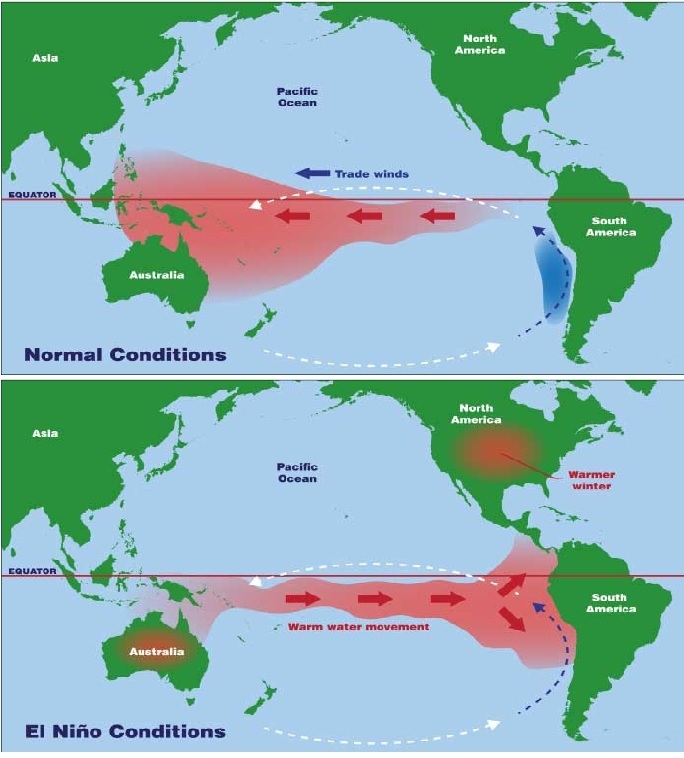 El Niño conditions are shown and compared to normal conditions. El Niño, which is sometimes referred to as the warm phase of ENSO, lasts nine to 12 months on average, but can last longer. Such events occur roughly every two to seven years, which can have global-scale impacts. / Courtesy of NOAA

What the scientists concluded is that future El Niño and La Niña events will bring proportionally stronger changes to the risk of wildfire in fire-prone places. Based on the climate models, climate warming may enhance the impacts of ENSO. This may create a higher probability and severity of regional temperature extremes, and, consequently, increased related impacts such as wildfire frequency.

“In Southern California, La Niña events tend to favor warmer and drier conditions, [which are] more conducive to wildfire,” Stevenson explained. “What our study indicates is that even if La Niñas themselves behave exactly the same way in the future, Southern California wildfires will still become more likely during La Niña years. That happens because the land surface is gradually warming due to human-induced CO2 emissions. So when La Niña comes along and adds even more heat and dries things out even more, that’s being added to a hotter and drier background that makes wildfires easier to start.”

Despite figuring out that the impacts of ENSO will intensify, the scientists still need to understand how ENSO will behave in the future to be able to estimate the total risk of future wildfire. Stevenson stresses the importance of working with many different climate models, which “can give us information that’s quite useful for planning, even if we don’t have all the answers yet.”

“Our study really highlights the need to be prepared, and to keep working on improving strategies for dealing with extreme events. We know that climate variability will continue into the future; ENSO is a natural feature of the climate and isn’t going anywhere. Since the impacts of that climate variability are likely to become stronger in the future, we need to keep that in mind when developing future firefighting plans,” Stevenson said.

This study was also conducted by lead author John Fasullo and co-author Bette Otto-Bliesner, both scientists at NCAR.