The Daily Nexus
Volleyball
Gauchos Get Back on Track with win over CSUN, prepare for Hawaii
October 4, 2018 at 5:04 am by Jake Ciccone 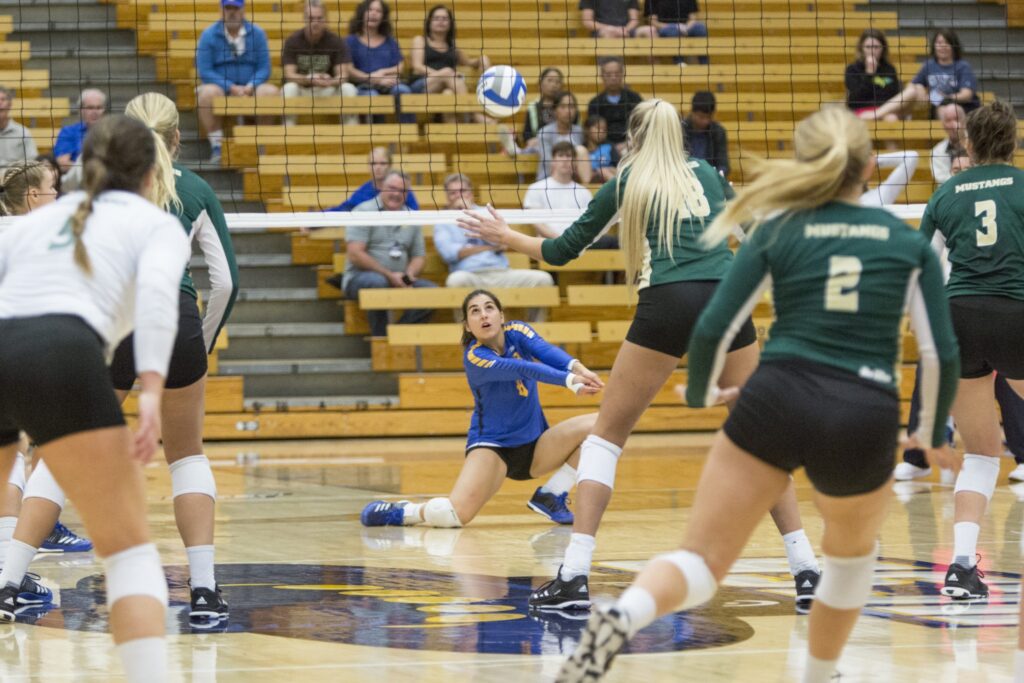 After a serve, Emilia Petrachi kneels to pass the ball. Dustin Harris/Daily Nexus

The UCSB women’s volleyball team got off to a great start this week, as they were able to make quick work against the Cal State Northridge Matadors with a 5-10 win in straight sets on Tuesday night.

This win came on the heel of a grueling five-set loss against UC Davis on Saturday.

UCSB was led by Big West Defensive Player of the Week Emilia Petrachi, along with Big West Player of the Week Lindsey Ruddins. Petrachi led the defense with a team-high of 15 digs, while Ruddins­ — once again — led all players with a match-high 17 kills.

The Gauchos, who started their night with an 11-6 overall record and 3-2 record in Big West play, were looking to avenge their last tough loss to UC Davis in the previous weekend.

The first set was highly competitive, as Northridge held a slight lead earlier in the game before UCSB tied it up with a score of 10-10. The two squads then alternated leads for the rest of the set, until a late run by the Gauchos set up a 25-20 first-set victory.

In the second set, Santa Barbara started out hot, growing its lead by as much as eight points at several different junctures in the match.

The Gauchos held a comfortable 19-11 lead after a kill by Charlie Robinson, and it seemed as if they were about to pull away until a plethora of serve errors and attack errors by UCSB sparked a 9-0 run by the Matadors, which allowed them to retake the lead 20-19.

From that point on, the two teams alternated points until two clutch aces by Lindsey Ruddins put the set away with a score of 27-25.

The third set did not contain nearly as much drama as the second. In this set, the Gauchos jumped out to an early lead and refused to relinquish their power, extending the lead to double digits early on and finishing off Northridge with a score of 25-12.

This win improved the UCSB women’s record to 12-6 overall, improving their conference record to a solid 4-2, an instrumental win in climbing the ranks to third place in the Big West.

One of the teams that the Gauchos trail behind in the Big West standings is their next opponent, the 8-5 Hawaii Rainbow Warriors, who currently sport an excellent 4-0 conference record. This match carries significant importance for the Gauchos because, if they are able to pull off the win at home this Friday versus Hawaii, it will show the rest of the Big West players that they belong at the top of the conference among the other elite teams.

If UCSB wants a chance to beat Hawaii, it is going to have to slow down talented libero “Tita” Akiu — who leads her team with 4.79 digs/set — as well as the scoring trio McKenna Granato, Norene Iosia and Casey Castillo, all of whom average over 2.3 kills/set.

Aside from the usual contributors (Ruddins and Petrachi), other players (like middle blocker Charlie Robinson and setter Olivia Lovenberg) have caught fire at a great time in the season and have contributed greatly to UCSB’s success so far. These outside contributors must continue their stellar play as the Gauchos embark on a difficult stretch of games in the thick of conference play.

UCSB is 6-38 all-time against the Rainbow Wahine, with a current streak of nine straight losses to Hawaii. This next home match would be a perfect time to break that losing streak and show the rest of the Big West that the Gauchos are the real deal.

The match versus Hawaii will take place at 7 p.m. on Friday, Oct. 5, in the Thunderdome.