With the first day of school at UCSB just around the corner, many Santa Barbarans chose to wrap up the summer with a night of innovative,  latin-inspired pop music from Miguel and his openers at the gorgeous outdoor venue of the Santa Barbara Bowl. With support from Nonchalant Savant and OVO signee DVSN, this performance from Miguel’s “The Ascension Tour” was as rehearsed, focused and high-energy as possible, with clear precision and performative value that is practiced, methodical and passionate. This show from Miguel demands acknowledgement of the strength in his entire discography and his long future to come in the music industry.

DVSN took the stage in preparation for Miguel, and the simple stage setup of three background singers and vocalist Daniel Daley with a mic set the focus solely on vocal prowess, something that Dvsn is very akin to. He performed a wide array of tracks from his three projects, showcasing his extremely wide range of vocal ability, namely his gorgeously high falsetto voice. Midway through his set, Dvsn had his DJ play some classic 90s R&B for the crowd to dance to, which seemingly was a highlight but came off as a cheaper attempt to gain attention from the audience. Despite this, DVSN’s stage presence is undeniable, and the OVO wave of R&B seems to be in good hands.

Miguel took the stage around 9:15 with a full band, backup singers and a staircase set in the middle of the stage, in alignment with other variations of Ascension to come. He opened with various cuts from new album War and Leisure, including “Banana Clip” and “Harem,” all performed with instrumental variations and a free range of vocal runs. The rock-inspired electric guitar elements in his music play a much bigger role in a live context, as the sharp riffs cut through the air and added powerful sound to the performance. Miguel would later explain that the set is divided into three stages, ending in full ascension in which him and the audience “skywalk,” concluding with his career’s biggest hit, “Sky Walker.” 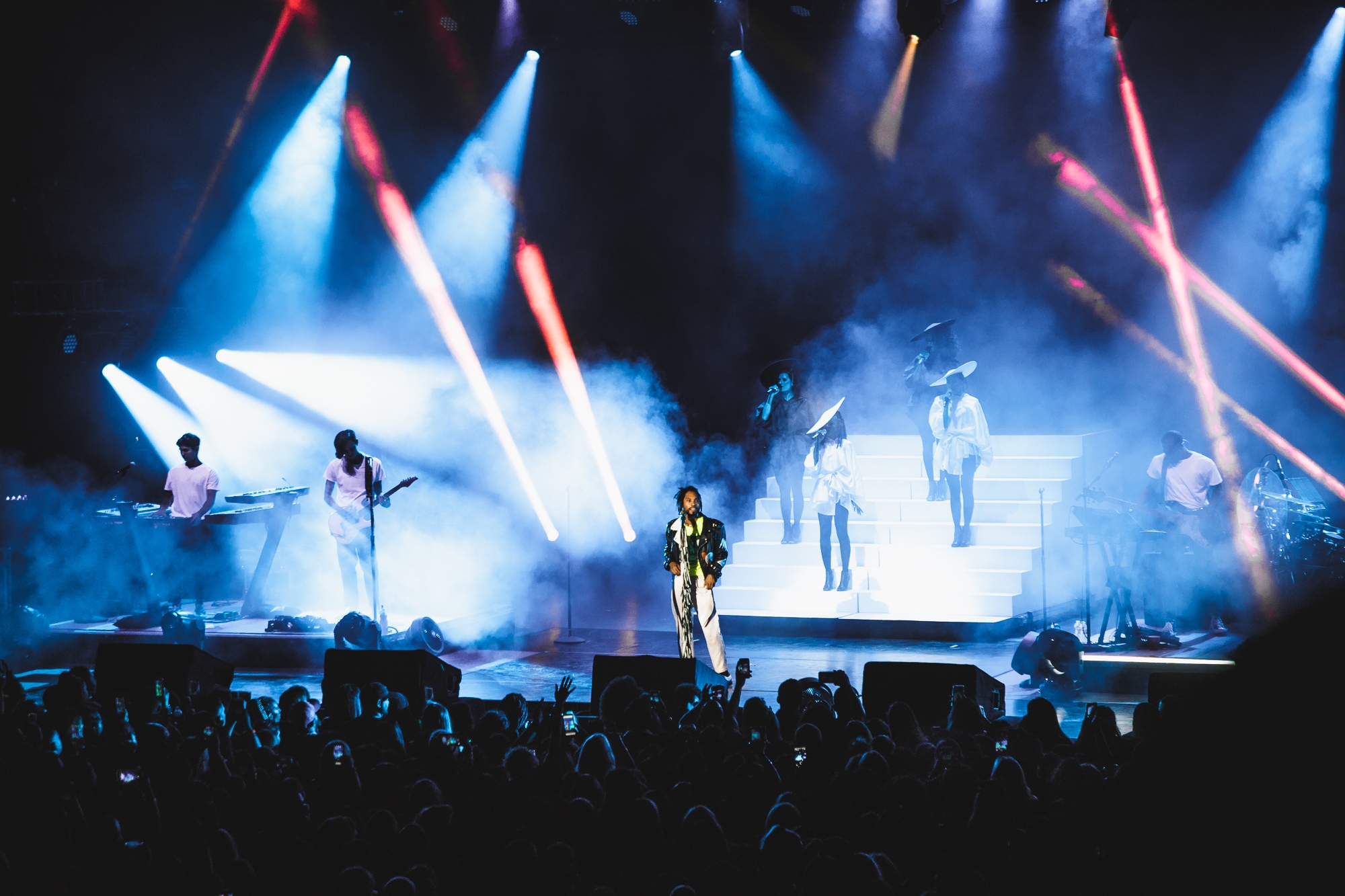 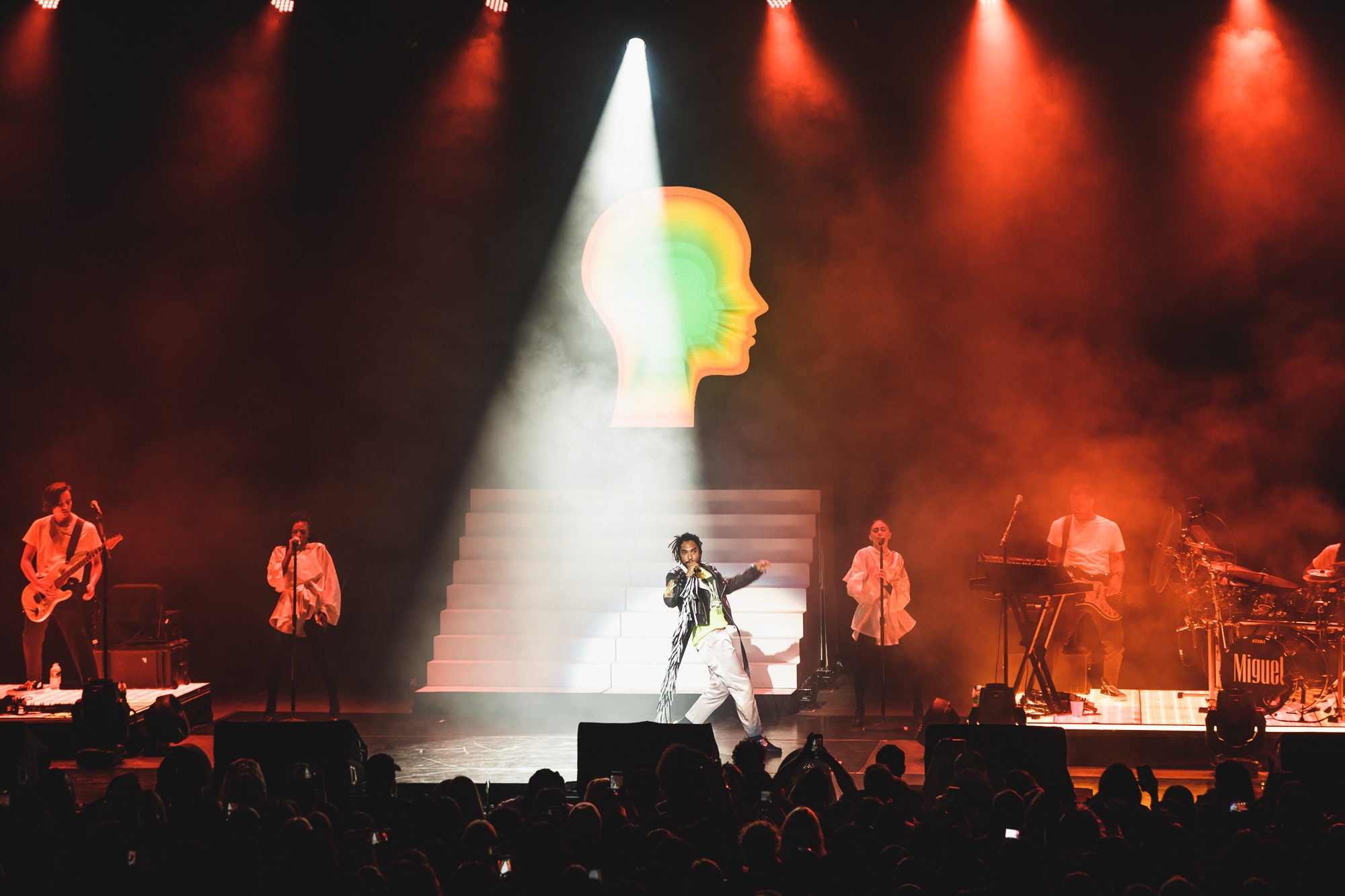 The stage presence of Miguel is articulate and precise, alarmingly reminiscent of the way Michael Jackson used to move about the stage and command his audience’s attention. He had constant choreographed dance moves along to the beat of his tracks and with background dancers behind him. The consistent jumps, hip movements and flails in sync with drum fills, guitar licks and beat switch-ups were crisp, clean and exciting. He began to lose momentum, however, whenever he addressed the crowd directly. His constant rambling about “energy,” “meditation” and the “spirituality” of his performance came off as baseless, as Miguel’s image has always been more lighthearted and transparent as a neo-pop artist. Also, his constant priming of the audience for the performance of “Skywalker” seemed to be a ploy for audience attention. Frequently asking the crowd “Are you guys ready to Skywalk?” after every few songs seemed to have the opposite effect from what was intended. Despite this, the purely musical aspects of the performance were impeccable, with strong instrumentation, vocals and choreography.

Later in the set Miguel played a variety of older cuts from previous albums such as sex anthem “Arch and Point,” hit single “Adorn,” the self critique “So I Lied” and the revered, albeit controversial track “Do You…” (like drugs?). In cautious fashion, Miguel made a point to follow up the latter track with a disclaimer that all drugs should be done safely and in moderation, a slightly cringeworthy yet necessary message, given the state of drug use in popular music today. I assumed, as I’m sure many in the crowd did, that Miguel would take some time to honor past collaborator Mac Miller after his passing, but unfortunately that moment was not taken during the performance. This functions as evidence that, in the midst of growing older and more mature, Miguel has been at a crossroads in navigating his image of edgy sex and drug icon and his wise creative persona, and he may not know what kind of image he wants to sell at this point in his career.

The set ended with more cuts from War and Leisure, including the Kali Uchis Spanish cut “Carmelo Duro” and dreamy landscape “Pineapple Skies.” He concluded his set, as predicted by himself and the audience, with his mega-hit “Sky Walker,” a moment that perhaps felt reduced after the previous hour of hyping it up. Regardless, the track was performed elegantly and with maximum response from the crowd, as “Sky Walker” marks one of the most energetic and fun songs of Miguel’s career.

I was more than pleased with the celebration of music, maturity and freedom that Miguel delivered at the Santa Barbara Bowl. Despite some flaws in his monologue and constant references to “Sky Walking,” the entire crowd was happy with his musical execution. Miguel is clearly aware of his talent and potential and will not hesitate to utilize these to the fullest of his ability. As the tour name suggests, Miguel has nowhere to go but up.