The Daily Nexus
On The Road
An Incredible Experience: Pixar Fest in Review
September 20, 2018 at 11:58 pm by Winnie Lam

As a Disney-obsessed SoCal resident, I knew I had to hit up California Adventure this summer for Pixar Fest. I got to “Paint the Night” with Mickey and all his friends in a spectacular nighttime parade and join the Incredibles family and Edna Mode on their mission to catch Jack-Jack, but most importantly, I had the chance to eat all of the limited-edition treats Pixar Fest had to offer. Here’s my take on all the decadent bites I tried at Pixar Fest, so buckle your seat beats and let’s 5, 4, 3, 2, 1 — Go! 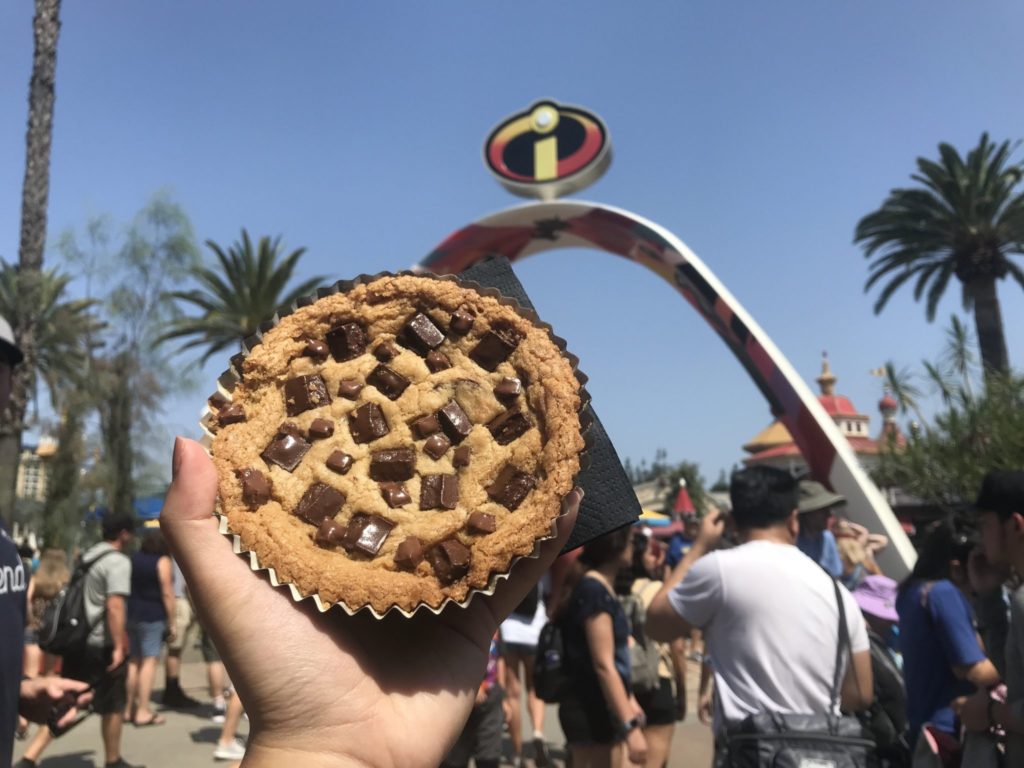 If there’s one thing Jack-Jack and I have in common, it’s that it’s always cookie time. Even though it was almost 90 degrees, I had to try this warm, deep-dish cookie that was right by the Incredicoaster. This is the best a chocolate chip cookie can get. The edges were perfectly crisp while the inside was ooey-gooey and the chocolate melted as soon as I took a bite. Fun fact: The tunnels in the Incredicoaster smell like cookies! 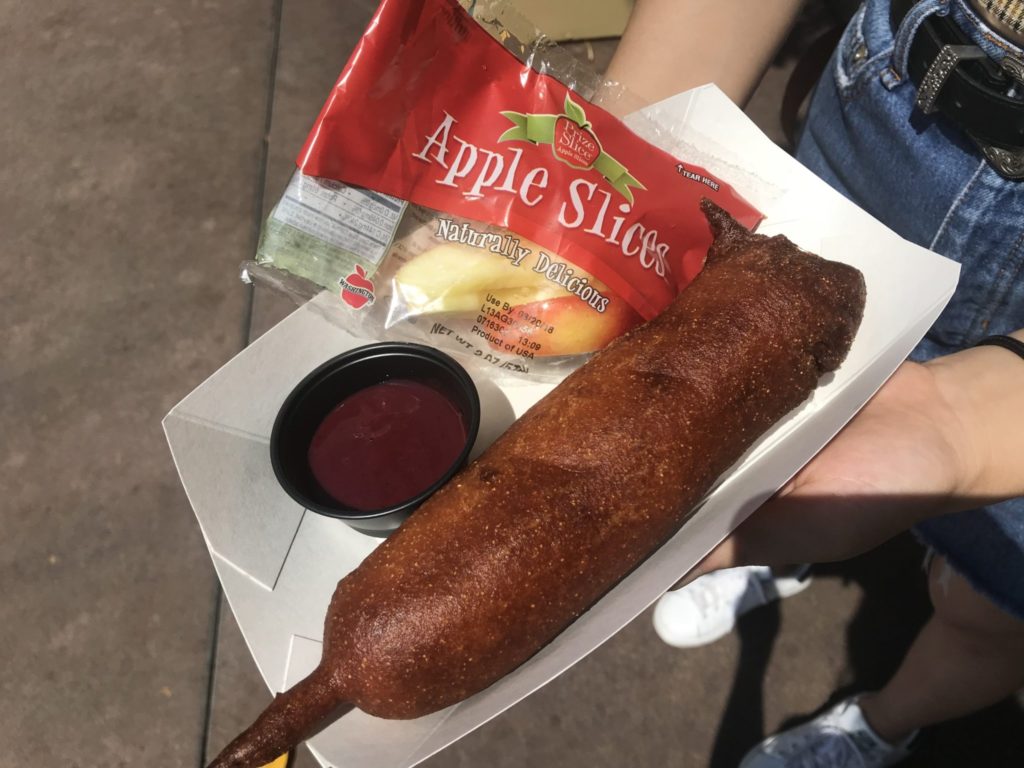 This corn dog is a #gamechanger. When I first bit into it, I was hit with a taste of a savory hot link sausage, which I dipped into the tangy blueberry-serrano chile sauce to amp up the flavor. Then, I made my way down to the melty pepper jack cheese in the center of the dog, which is basically the better version of a mozzarella stick. After all of that, I was already getting full, but the complimentary apple slices helped freshen my palette and prepare me for the last surprise: the cajun chicken sausage. It was spicy and savory, which made it a really good conclusion for this massive corn dog, but I could’ve done without the chewiness of the meat. 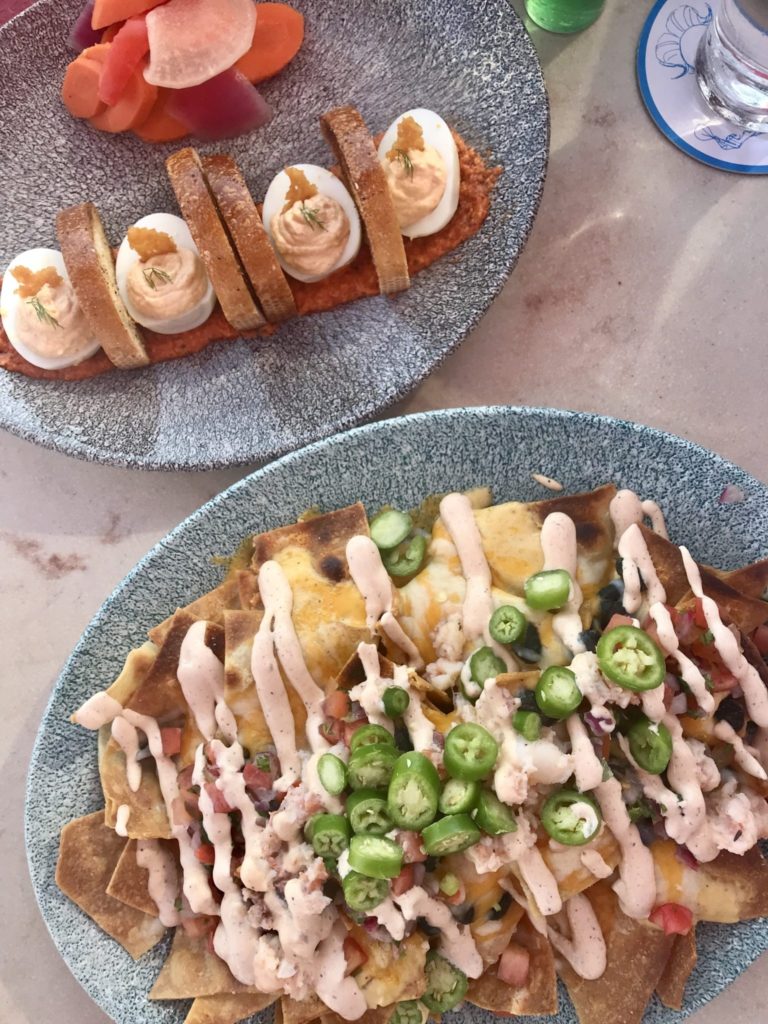 I was sad to see Ariel’s Grotto and Cove Bar go, but this new pierside bar and restaurant is the perfect combination of the nostalgic Paradise Pier and the contemporary Pixar Pier. I ordered the lobster nachos to remember the good old days and the deviled eggs to try something new. The nachos were just as I remembered them: The light chipotle crema, the warm buttery lobster, the melty cheddar and oaxaca cheese blend and the crispy tortilla chips were all integrated into the best dish California Adventure has to offer. It’s a meal and a snack. As for the deviled eggs, the filling was tangy yet creamy, and the red sauce complemented the toast perfectly. The pickled veggies on the side, however, were not for me. 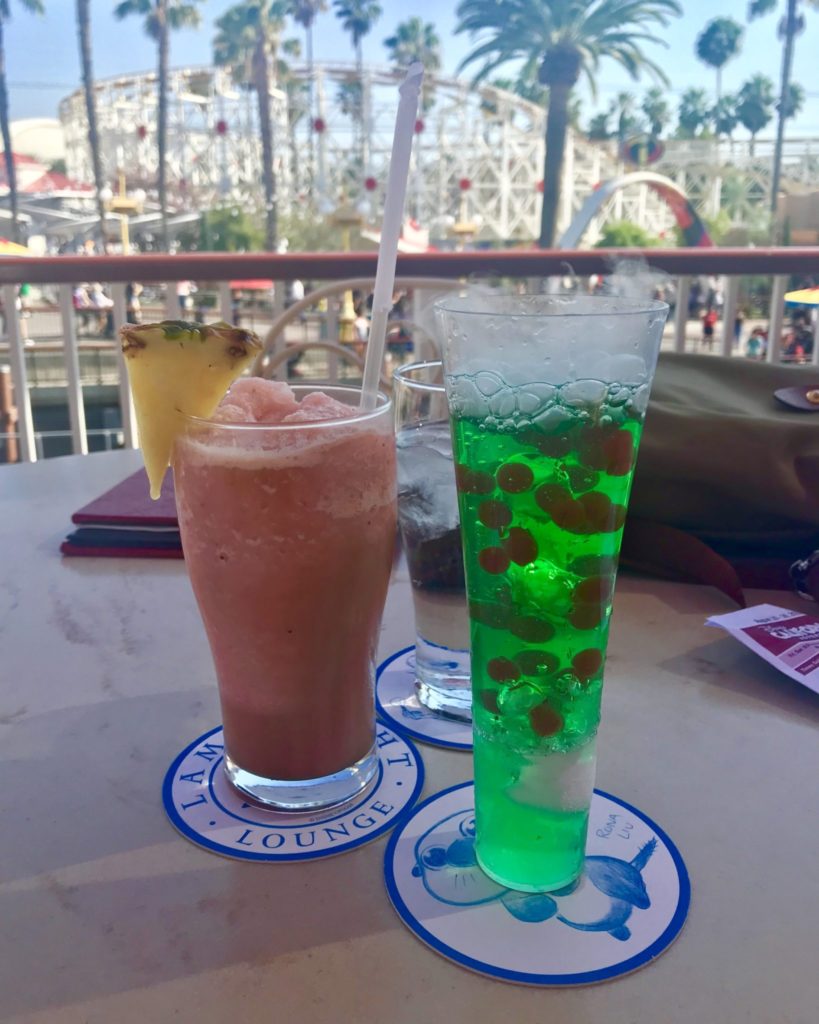 The drink menu at Lamplight Lounge is pretty limited if you’re underage, so I just ordered the 2319 Smoothie and the Infinity Fizz. The 2319 was a perfect blend of strawberry, coconut and pineapple, and it pairs well with the lobster nachos. The Infinity Fizz is a powerade drink with apple juice and cherry pearls that whirl around the cup. It was perfect for the ‘gram, but the drink itself was a hard pass. It tasted like someone had melted a jolly rancher into liquid form and served it to me. Unless you have the taste buds of a seven-year-old, this drink won’t be taking you to infinity and beyond. 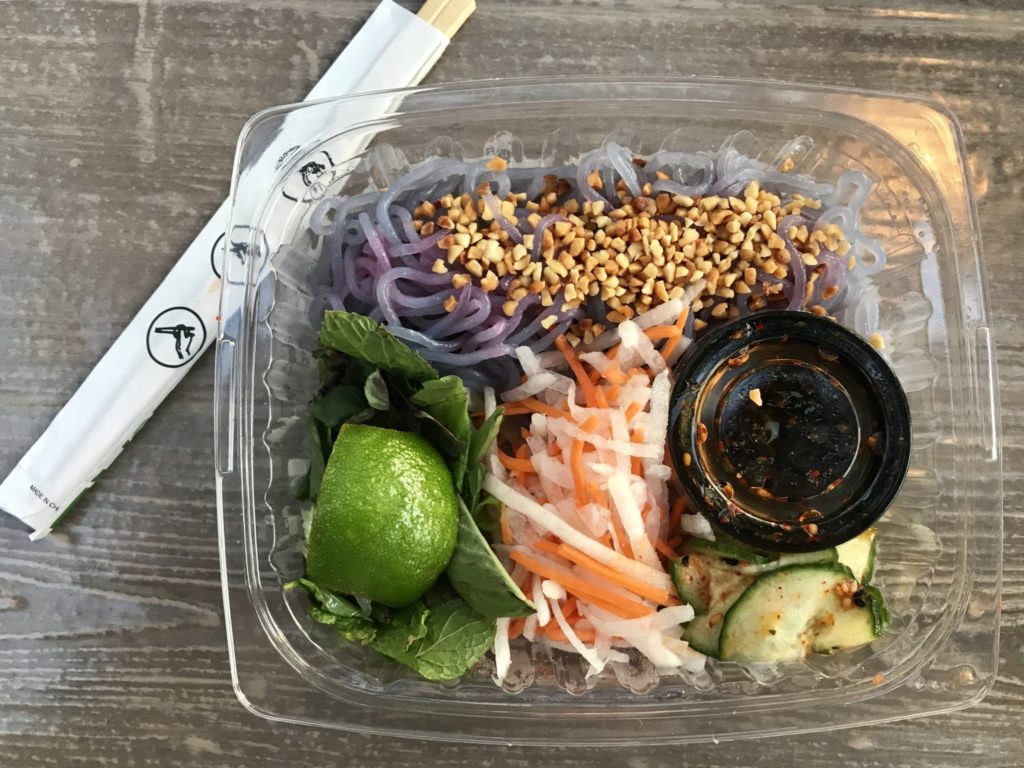 Let’s get down to business: This noodle salad was a perfect meal on a hot summer day. I don’t know what kind of magic Mushu did, but these blue noodles change to purple when you squeeze lime juice on them and mix all the ingredients together! The glass noodles, peanuts and pickled veggies was the refresher I needed to continue all my Pixar Fest endeavors. 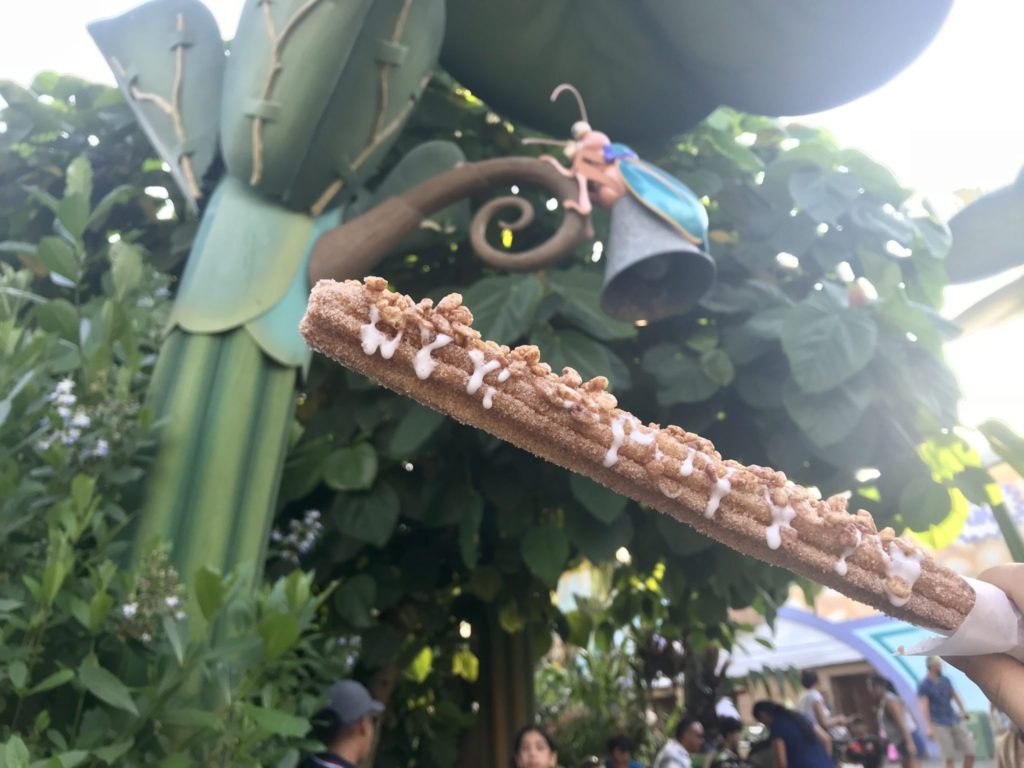 A Bug’s Land Churro Cart: Ants on a Log

As I said my last goodbyes to A Bug’s Land, I had to have a taste of this churro. The Cocoa Krispies are sprinkled on top of the churro to look like little chocolate-y ants crawling on the log. While it was tasty for the first few bites, it was too sweet with all the cinnamon, donut glaze sauce and cereal. 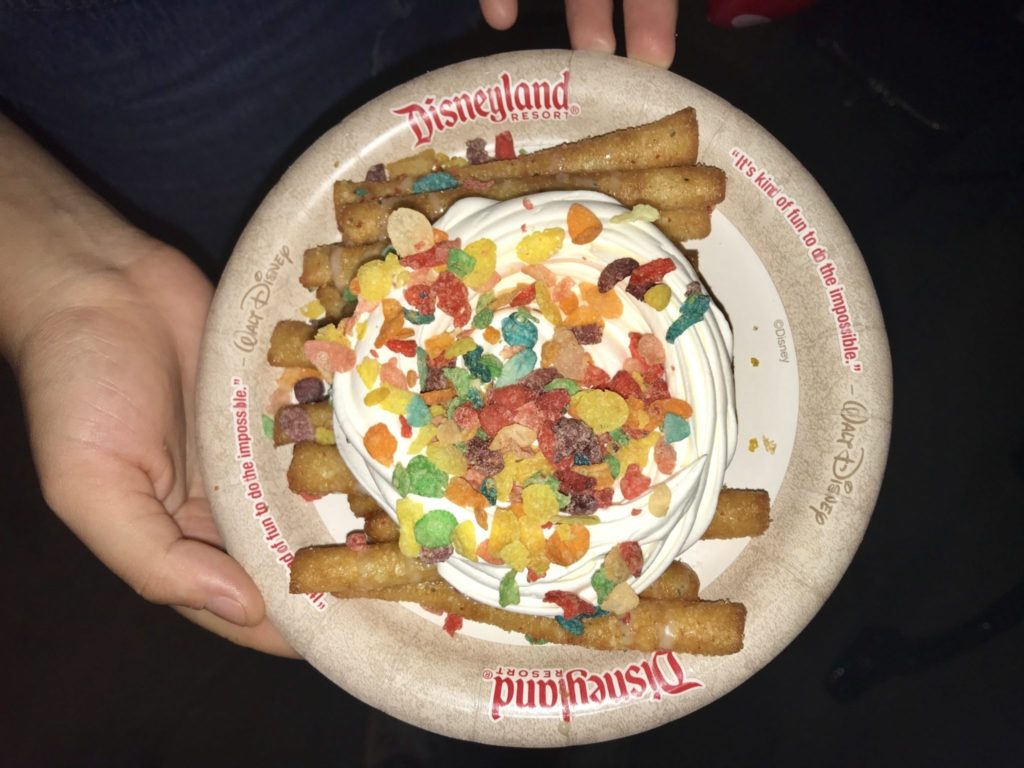 Topped with whipped cream and fruity pebbles, this sweet dessert was an excellent way to end my Pixar Fest experience. The fact that the funnel cake was fry-style was super convenient to eat on the go, especially since I was racing across the park to get a viewing spot for the parade. The only thing that would’ve made this dessert better is if there was ice cream to complement it.

Sadly, Pixar Fest ended early September, but there’s no doubt that I’ll keep this food in my “Proud Corazón” forever. Luckily for us, the food at Lamplight Lounge will stick around, so we won’t have to part with those lobster nachos just yet.