Here’s a fun mental exercise: suppose you’ve got a plot of land in its original, untouched state. Assume you’re a farmer and you need to grow some crops, but you’re also environmentally conscious and want to do your part in decreasing the escape of CO2 into the atmosphere. The problem is that in order to clear land for your crops, you destroy forest area and all of the carbon that was sequestered (stored) safely inside the roots and leaves of the forest’s first inhabitants is now released into the atmosphere.

Given that some extent of destruction is inevitable, the eco-friendly agriculturalist turns to the sort of crops that will come next. Some crops conserve carbon more than others, but they’re also lower yield, so you need more land to grow more food. It’s an algorithm of sorts: maximize the yield while minimizing carbon loss to the atmosphere. How would you proceed?

David Williams, a conservation scientist and postdoctoral scholar at UCSB’s Bren Hall, has spent years researching an optimal solution. During his time in three different world regions, Williams and his team conducted field research exploring the complexities of the aforementioned puzzle.

They found that regardless of the region, whether it be humid forests of Ghana, temperate Polish wetlands or dry areas of Mexico, the land-sparing option comes out on top. By preserving as much of the forest as possible, this technique uses the remaining land to do high-yield agriculture. This maintains biodiversity and contributes the least carbon to the atmosphere while allowing for a comparable level of food production.

We’ve been doing about half that equation right so far. Worldwide over the past eight years, the global community has funneled $777 billion into agriculture and forestry development. That’s the funding that helps farmers up their yield. This makes no commitment to high-yield’s counterpart, land-sparing (which must include some kind of conservation). Forest conservation only gets around $20 billion a year.

This is an important distinction. Some kinds of agriculture are dubbed “potentially land-sparing,” simply because they’re so high-yield. There are plenty of those systems. The rarer ones, the real gems here, use “strategies that have explicitly linked high yields with a land-sparing approach,” according to Williams.

The statistics above speak volumes about where global interest, and subsequently the globe’s money, goes. “Unless this changes,” Williams continued, “we’re unlikely to make meaningful progress toward lower-carbon agriculture.” There’s still hope, though: There are a few places throughout the world that have employed land-sparing and high-yield agriculture techniques. 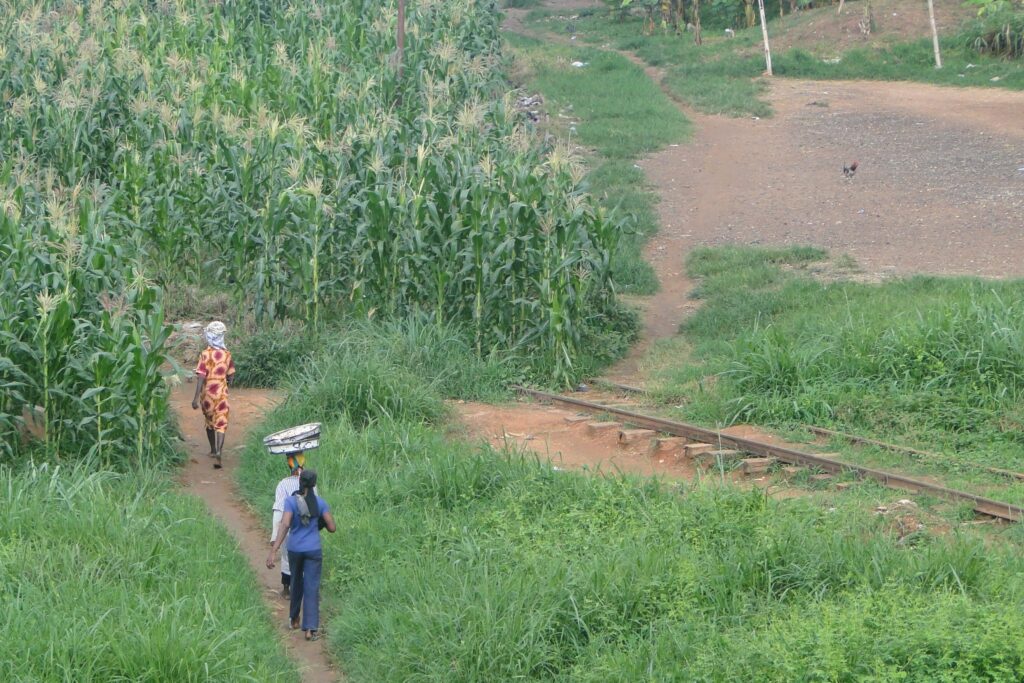 Women farm in cornfields in Ghana. / Courtesy of Wikimedia Commons

According to a policy paper published a few years ago by Ben Phalan, Costa Rica has cracked down on their land zoning, and this forces higher yield in an interesting way. When regulators zone only some land as okay for agriculture, farmers have a limited space (but the market doesn’t care), so they find higher yield methods to get a comparable harvest using less land. In this sense, stricter agricultural expansion laws could spell success.

Related to this method is another policy mechanism that makes use of environmental instruments, as Williams put it. “These could be land taxes, payments or subsidies that either encourage yield increases or provide assistance to farmers, dependent on them not expanding agriculture,” he said.

For example, Williams referenced several programs across the globe, including in an area of Northern India called Spiti, where the government has provided assistance to prevent snow leopard predation of farmers’ flocks in return for the farmers agreeing to designate some spots as conservation areas. For this region, this works. Fewer of farmers’ flock are picked off by the local predatory cats, so their business becomes higher-yield while practicing land-sparing.

While successful techniques have proven highly contextual, one thing remains the same across all the regions Williams and his team studied. The carbon loss difference between small- and large-scale farming is tiny compared to that between untouched land and agriculture of any kind. This doesn’t mean that you should give up hope at your local farmer’s market, but rather this just puts the issue into perspective. Converting forest to farmland is detrimental to the Earth in a big way and isn’t something that can be solved by buying only organic produce or only produce sold from under a tent.

The two most accessible ways to broach both the political and social aspects of the web of issues that underlie the puzzle of agricultural and conservation, Williams agreed, is to vote and have conversations. The best path depends on the culture and politics of each area, so naturally, some mechanisms will be policy-based while others will rely on social change. Whatever the path we choose to pave for ourselves, however, Williams and his team have set up a beacon. We know where we’re going, and we’ve got the freedom to decide how we’ll get there.

Not all “high yield” practices are good for the environment/biodiversity/carbon sequestration (etc). As a matter of fact, most aren’t good for them at all. So the $777 billion or whatever is likely counterproductive (as it were). High yield practices are usually only so in the short-to-medium term; long term, they are quite damaging.