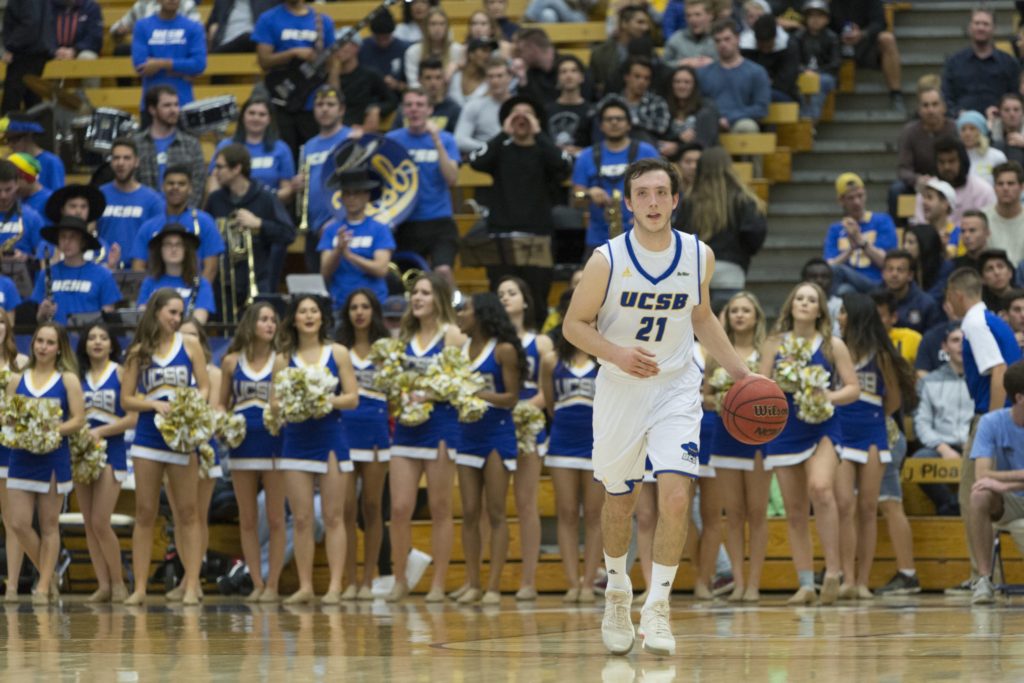 After bringing the ball back in play, Max Heidegger moves up the court. Dustin Harris/Daily Nexus

One year ago at this time, newly appointed Head Coach Joe Pasternack was in the midst of summer, tasked with turning around a team that finished its previous season with only six wins. It took only eight games into Pasternack’s first season for the team to notch the same win total, but that was just the beginning.

Now, one summer later, the Gauchos are looking to build off their refreshing 23-9 season that saw the breakout performance of guard Max Heidegger and a revitalization of the Thunderdome. Now, this year, UCSB men’s basketball is back knowing what the team is capable of under Pasternack’s system.

The results were certainly taken care of, with the team tying a UCSB record with 23 wins and narrowly falling short in the Big West Tournament.

Crucial to the Gauchos’ success last season was now-junior Max Heidegger, who led UCSB with 19.1 points per game, and senior transfer Leland King II. While King II, who averaged a double-double of 15.6 points and 10.2 boards per contest, won’t be on the court with the Gauchos this season, his production demonstrates the immediate impact that recruited transfers can have for a team.

This will be especially important for UCSB. Despite losing four senior starters and seven seniors in total, Pasternack has brought in another talented class of recruits, highlighted by game-ready transfers capable of keeping Santa Barbara’s momentum alive.

“We had the biggest turnaround in NCAA history last year from six wins to 23 wins, and a big part of that is the students,” Pasternack continued. “When I first got here April 4, 2017, I said I wanted to build this program where everyone in the community of Santa Barbara and, most importantly, the students would make this their home court advantage.”

Heidegger’s lights-out shooting will surely bring fans to their feet again this season, filling the Thunderdome with new life. Home court advantage was real for the Gauchos last season, as they won 11 straight at the Thunderdome to start the season and ended 12-2.

Coach Pasternack hopes to see the same kind of energy at home this season and will likely be putting together more enticing giveaways closer to the start of the regular season.

“Towards the end of the year, whether it was Irvine at home or the last game of the year, specifically Cal Poly, there was nothing like it; the energy and excitement in the Thunderdome was unbelievable. It was definitely a sixth man for us and I can’t tell you how important that is for our players to have the Thunderdome packed every night no matter who we’re playing. For our program, that’s our goal: to fill the Thunderdome each night,” said Pasternack.

There’s no substitute for a packed Thunderdome when the Gauchos hit a three in transition, so it says a lot for Pasternack and his staff to be so invested in the students and fans.

While another 17-win jump is simply impossible, the culture of the Thunderdome is back. And with momentum from last year’s success, the Gauchos are prepared for another remarkable season.