Frances Woo got the idea to create her own magazine last year as she was sitting in an editors meeting for Spectrum magazine, another publication at UC Santa Barbara.

Woo, a second-year sociology major at UCSB, said the idea came to her while she and the rest of the editors were debating which article they should feature in their magazine. One editor suggested they print the article that was written by a woman because “women never get published in literary magazines.” 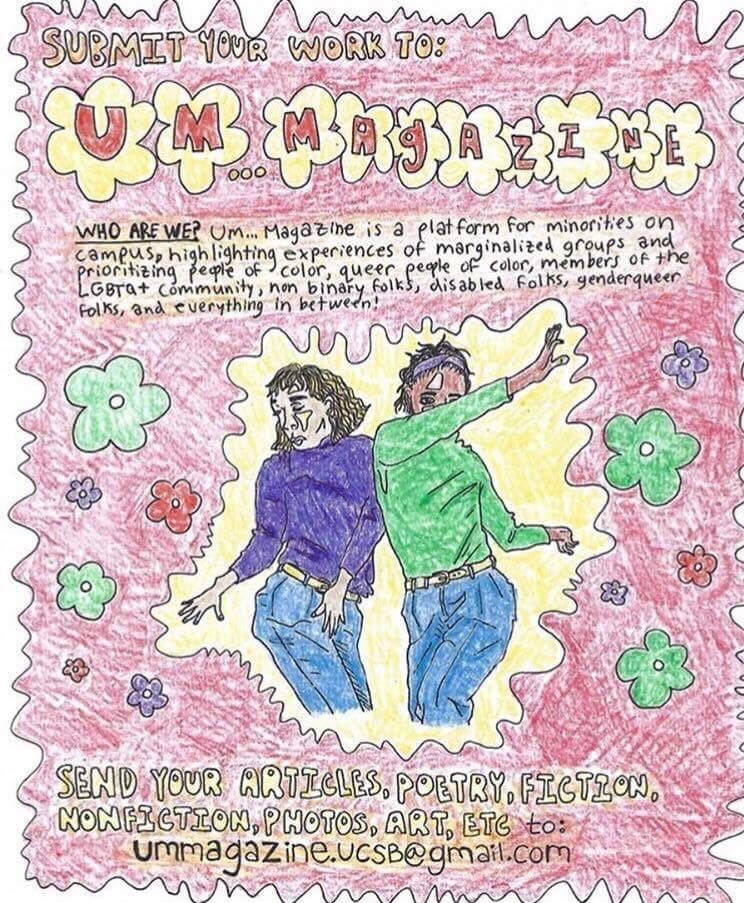 “[That comment] got me thinking how a lot of times in magazines and media in general, that straight white-abled bodied heterosexual men tend to be prioritized unconsciously and consciously throughout society,” Woo said.

Woo, along with a team of eight other second-year students, then decided to create a literary space of their own where students of all genders, races and sexualities could be equally represented.

“I wanted to make a space and a platform for people who don’t live by those labels to showcase their art and creativity in a way that uplifts them and lets them speak for themselves,” Woo said.

The publication will be called “Um…” Magazine because it represents the “psychological fillers” used by marginalized groups as they speak to others as to not come across as “aggressive,” “rude” or “harsh,” according to the magazine’s Gofundme page.

The magazine will start out as a website that will feature content such as photography, videography, art and literary pieces. Each featured category will also have its own sub-section such as poetry, prose, drawings, paintings and sculptures, Woo said.

“Um…” Magazine’s editorial team hopes to have print editions of their content by Winter Quarter 2019, according to Woo.

While the magazine does plan on having consistent writers on their team, Woo said the majority of the content they wish to include will be submitted by students themselves, which will hopefully showcase students’ own personal struggles and stories.

Anyone who wants to submit content will be allowed to do so, according to Woo.

“The magazine would prioritize [marginalized] people… but won’t exclude anyone who wanted to submit content,” she said.

“We hope to give voices to those [marginalized] groups and opinions that don’t see as much light without feeling it necessary to censor or change what they have to say regardless of who’s listening,” the magazine’s Gofundme page states.

Woo’s hope is that the magazine will turn into a community rather than just a publication. They will hold fundraisers and social events, such as open mic nights, throughout the year to get more students involved and interested.

A goal for the magazine is to be able to hand out their publications for free, so more people can read their content.

“I think opening up people’s eyes to new perspectives will help them practice more than just tolerance… they’ll practice acceptance and to support those who don’t fit into a very one-sided perspective,” Woo said.

The magazine has its own Instagram page that will keep students updated on the progress of the publication process. They have also asked students to submit their own content, which is already being featured on the page.

This is classic! Only when we exaggerate the ridiculous nature of PC, identity politics like this article brilliantly does will we possibly be rid of it. Excellent satire!!