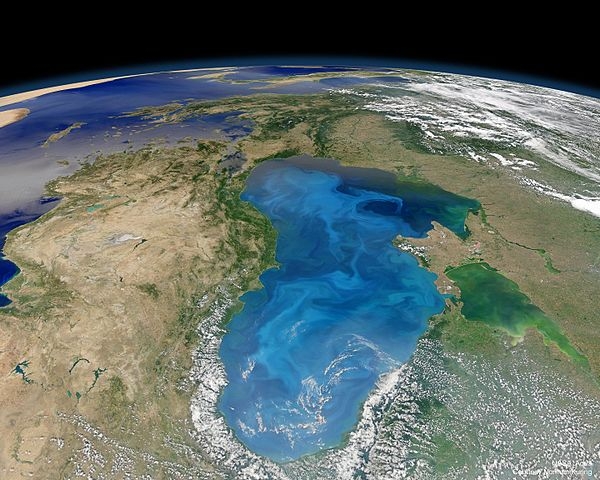 Algae blooms, composed of the rapid multiplying of the marine plant phytoplankton, are visible from space as a cyan pattern. Phytoplankton consume carbon dioxide and play a key role in transferring carbon from the atmosphere to the ocean. / Courtesy of Wikimedia Commons

NASA’s EXport Processes in the Ocean from RemoTe Sensing campaign, or EXPORTS, allows researchers to understand the future of the global ocean primary production and its impacts on the ocean’s carbon cycle. The objective of EXPORTS is to design reliable models that would allow researchers to assess the interactions of the ocean ecosystems as well as the carbon cycle from satellite data on a global level.

When the acronym is broken down, “export processes” refers to biological material that is carried into the “twilight zone” of the ocean. In this deep part of the ocean, carbon remains hidden for a long time before making its return to the atmosphere. This process, which moderates climate, is also known as the “biological pump”.

“The main goal of the project is to understand how the biological pump works in the context of physical and biological conditions in the ocean surface and ‘twilight zone’ and to develop ways of assessing the biological pump globally using satellite-based remote sensing,” said Norm Nelson, research oceanographer at the Earth Research Institute at UCSB.

The plan is for EXPORTS to measure the pathways in which organic carbon is transported from the upper ocean into the ocean interior. The ocean interior is the place where carbon is withdrawn from contact with the atmosphere. EXPORTS is designed to assess all the main pathways in the biological pump at the same time under varying environmental conditions.

“These pathways deliver organic carbon to depths where it is respired back to dissolved carbon dioxide but sequestered from the atmosphere for months to millenia depending upon the circulation of the ocean,” said David Siegel, professor of marine science at UCSB.

There are two major expeditions planned for EXPORTS: one will be to the Northeast Pacific in the later months of 2018 and the other one will be to the North Atlantic in the year 2020. It is on those expeditions where researchers will be able to make the measurements for the biological communities, as well as the physical and chemical environments at the field sites. Researchers will also be studying the optical properties of the water column and its components, which will be important for developing remote sensing techniques, said Nelson.

Additionally, autonomous vehicles, such as gliders, drifters, profiling floats and tethered profiling instruments, will be scoping out the regions before, during and after researchers arrive on scene. This allows for more time that can be spent on the site to study the change of seasons.

Since there is a team of more than 100 people contributing to the EXPORTS campaign, there will be two ships going out to sea for the expedition. These two ships, named R/V Roger Revelle and R/V Sally Ride, are essentially floating laboratories enabling research to take place.

R/V Roger Revelle, known as a “process ship”, will make detailed rate measurements, staying drift with the currents at the center of the study area. The researchers aboard R/V Roger Revelle will be conducting a significant and wide variety of experimental work.

R/V Sally Ride, known as the “survey ship”, will travel around the R/V Roger Revelle making measurements in grids in order to quantify the spatial variability of the environment.

“We know surprisingly little about how ocean ecosystems interact with the carbon cycle in a predictive way. There are many feedbacks linking the function of ocean ecosystems [and] their carbon cycle to the circulation of the ocean. We need to make predictions to understand and to plan how our environment will change in a warming climate,” said Siegel.

More information about EXPORTS can be found on their website: http://oceanexports.org.