A 18-year-old Isla Vista resident was arrested by police Thursday morning for robbery, conspiracy and assault with a deadly weapon, according to the Santa Barbara County Sheriff’s Office.

Marco Mendoza is one of two suspects in an attempted robbery that occurred on the 700 block of Camino Del Sur at approximately 11 a.m., according to Santa Barbara County Sheriff’s Office (SBSO) Spokesperson Kelly Hoover. 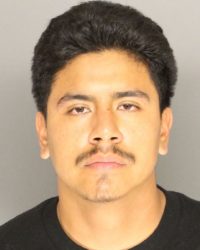 Mendoza is an 18-year-old I.V. resident. Courtesy of SBSO

Two suspects in a pick-up truck approached a man biking and accused the bicyclist of “committing crimes in the area,” Hoover said in a press release.

Mendoza, the driver of the truck, then threatened the victim with a knife. The victim discarded his bicycle and began to call for help.

As Mendoza attempted to take the bike, other residents of the apartment complex were drawn outside by the noise, Hoover said.

The second suspect ran away through an alley while Mendoza drove away in his truck, almost hitting one of the residents who came outside to help.

Mendoza and his vehicle were found on the 6700 block of El Colegio Road, where he was arrested. He is currently being held at the Santa Barbara County Jail on a $100,000 bail.

The second suspect has not yet been found.

Anyone with information about this incident can call the Sheriff’s Criminal Investigations Division at 805-681-4150. Individuals can also leave an anonymous tip at 805-681-4171 or on the SBSO website.

Wow – these geniuses were willing to go to prison over a bike, huh? They must have really wanted that bike badly.