The Daily Nexus
Sports
Warriors Vs. Cavs Part IV: The NBA and LeBron
May 31, 2018 at 5:09 am by Max Kelton and Brandon Victor 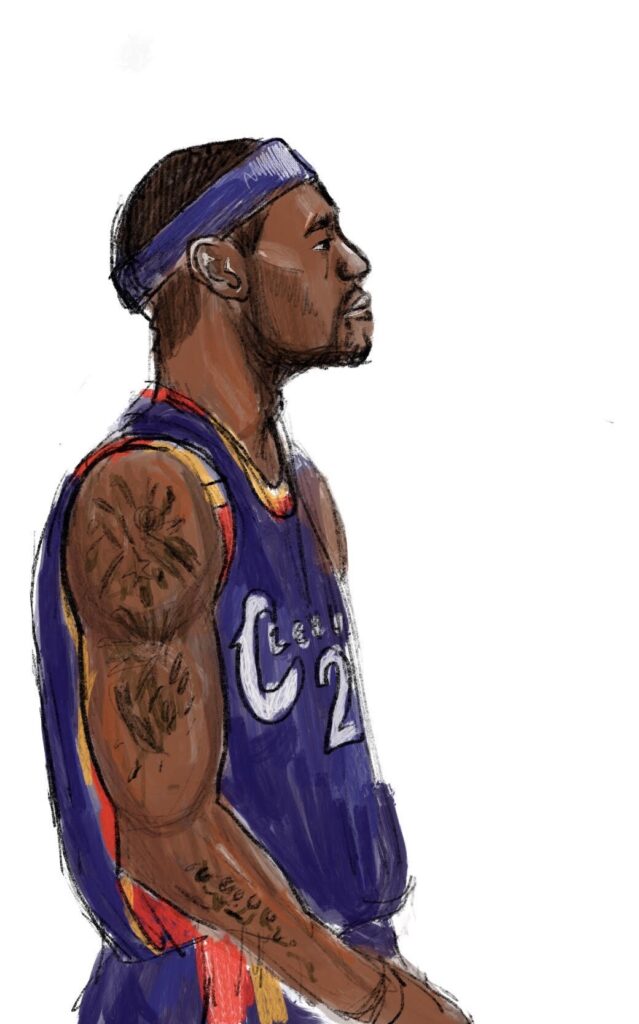 Dynasties Come and Go, But Are Four Finals in a Row Too Many?

They call him the King, and who wouldn’t? I mean, the man in question has reached the pinnacle of
competition in every season for the past eight years. LeBron James’s jersey sales are impeccable and he
sets a precedent for every young baller. Not only is James’s character one to look up to, but his work
ethic is that of a champion.

LeBron himself, however, doesn’t have the entertainment factor to support the entire NBA. What
shines from Jordan is the fact that during his six years competing in the NBA Finals, average viewership
was the highest it&#39;s ever been, barring the 1987 Lakers-Celtics, Magic-Bird, rivalry matchup.

Yet the NBA was plagued after Jordan’s final championship appearance. Come 1999, average
viewership slipped to just above 11 million after reaching nearly 19 million average viewers in 1998
following a steady rise in the recent five years. Since Jordan, average viewership in the NBA Finals
remains low, with the ceiling reaching 12 million viewers in 2001, 7 million less than the NBA’s peak in
1998, the last time the G.O.A.T. competed.

As LeBron’s championship woes continued in Cleveland, following his first appearance in the Finals
which culminated in a devastating sweep in 2007, average viewership curbed to approximately 6 million
average viewers, the lowest it’s been in over 40 years throughout the entire modern NBA era.
The King finally got a taste of a ring in Miami, a flavor he so longed for his hometown fans to indulge in.
Yet as he shifted gears back to Cleveland, a new duo of stars emerged in the West: cue the Splash
Brothers.

Steph Curry and Klay Thompson brought significance to NBA level competition by reinventing the
game. Kids want to emulate Curry’s shot. Players want to resemble the impact that the Splash Brothers
have on a game when they are healthy. LeBron displays superhuman athleticism and strength, but the
Warriors make it look relatable — they have fun playing this game. LeBron’s jersey sales are impeccable
… but Steph Curry’s are off the charts.

And it’s no surprise that the top two teams in merchandise revenue are those two that have been in the
NBA Finals for each the past four seasons.
Over the past three years, the average viewership has reached its height since 2001. Fans love to see
a plethora of talent displayed in the championship games, but LeBron’s team seems to lack the star
power that we’ve seen in the past. Similarly, over the past three years, average viewership has declined
from 2015.

Viewership peaked when Steph and Klay shocked the world in 2015 by dropping the King. Followed by
a slight decline in viewership in 2016, Lebron and Kyrie bounced back and dropped the best record the
NBA had ever seen. 2017 brought Kevin Durant and suddenly the outcome became as predictable at the
start of the year as it was at the end as viewership once again dipped during the 5-game series.

The NBA’s motto is “Where Amazing Happens,” but if the result is gradually and increasingly far from
mysterious, is the NBA really “amazing” anymore?

Can the One Man Army Win It All By Himself?

What else is there to say about LeBron James that we haven’t already heard? Despite thousands of minutes on his 33 year old body, despite all science suggesting he should be slowing down, the King continues to get better and more efficient, culminating in arguably the finest postseason of his career.

Once again, LeBron James has defied all logic this postseason, carrying a team of washed up stars that likely would have gotten swept by the Pacers without him to the NBA finals.

Through it all, LeBron has reminded us why he is the best player in the world. This postseason, despite shouldering a 36 percent usage rate, James has averaged 34 points, 8.8 assists, and 9.2 rebounds while still shooting a remarkable 54 percent from the field. With 13 double-doubles and 3 triple-doubles already this postseason, LeBron has solidified his name in the greatest of all time conversation.

But can he do it all alone? Unless Kevin Love– who was a minus 18 in the Boston series– comes back from his concussion a brand-new player, he will once again be trying to drag this team of misfits and washed-up players past the finish line. And although LeBron displayed his greatness during the Boston series, he also seemed incredibly fatigued at times, missing rotations on the defensive end that he would never have missed in the past.

LeBron will still get his buckets against Golden State, especially while Andre Iguodala remains sidelined. Despite the tenacious defense of Draymond Green and Klay Thompson, no player in the NBA can consistently guard LeBron James. While he may no longer have the explosiveness he used to, James has mastered his craft, using his strength to finish at the rim and then coming back and hitting a step-back on the very next play.

Expect a vintage performance from the King this series– a player who has proven time and time again that he comes to play when the pressure is on. Similarly to 2015– when Kyrie Irving and Love both got injured– LeBron will do everything in his power to fight and claw his way for his fourth title. Unfortunately, just like in 2015, the best player in the world can’t beat a team as deep and talented as the Warriors just by himself.