Hookup culture defines college campuses. In other news, the Earth is round. The Sun is hot. Did I mention water is wet? As Spring Quarter speeds to a close, even the freshmen have probably come to this conclusion by now. A newfound sense of freedom, access drugs and alcohol and anonymity all come together to create the perfect environment for casual sex.

Unsurprisingly, sex is a hot topic of discussion in college, whether you’re talking about a latest hookup after a night out or trading your worst hookup stories at a kickback. With everyone talking about sex, it may be easy to come to the conclusion that everyone is doing it. Well, that’s not the case.

Ladies and gentlemen of UCSB and beyond, I am a virgin. 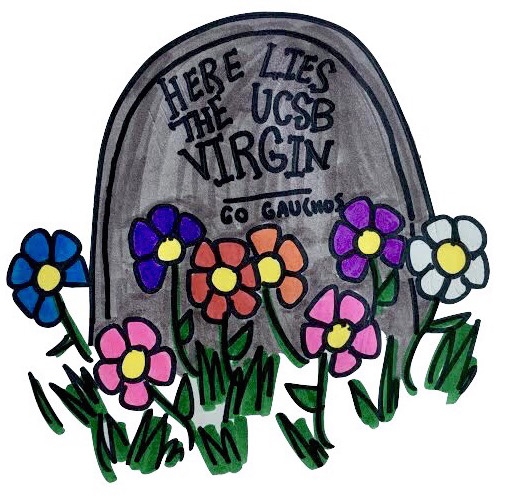 Now you may be wondering: Is she celibate? Abstaining for religious reasons? Waiting for marriage? Physically unable to? Emotionally unable to? The list goes on. Feel free to add some of your own assumptions to keep it interesting.

Although all of these are completely valid reasons not to have sex, would you believe me, if I told you that the reason why I’m still a virgin is, in fact, none of those reasons?

I’m going to be 100 percent honest with you guys because I feel like we’ve really established a sense of trust within the last two minutes. The reason why I haven’t had sex yet is because the right moment with the right guy just hasn’t presented itself.

In my own awkward and naive fashion, I have had my fair share of defusing and escaping from sexual propositions. Now, I’m not looking for a bed of roses by candlelight experience with the absolute love of my life, but I’m also just not infatuated with the idea of a casual hookup. If I wanted to, I could find a random dude and get the deed done. However, as appealing as that sounds, I’m going to have to pass on that one.

If you’re someone who enjoys the hookup culture, then more power to you. Keep on doing what you’re doing. If you’re someone who wants more than the casual sexual encounter, well, there’s nothing wrong with wanting more. In a culture where forming an emotional attachment to your casual hookup is the greatest violation of college social norms, it may seem unthinkable to even want something meaningful.

The reason why I haven’t had sex yet is because the right moment with the right guy just hasn’t presented itself.

I often joke around to my friends that I may, in fact, die a virgin. And although I doubt I’ll live to the ripe old age of 72 (the average life expectancy for females in the U.S.) with my v-card still intact, this scenario is totally plausible. Tomorrow, I could be biking on my way to class, and then bam I’m hit by a car. If that happens, feel free to write “DIED A VIRGIN” on my tombstone. I won’t mind. I’ll laugh from the afterlife.

Who knows, maybe I’ll end up like the 19-year-old girl who sold her virginity for $3.87 million (Just kidding, Dad!)

As Hagrid once said, “What’s comin’ will come, an’ we’ll meet it when it does.”

Although he was talking about waiting for He-Who-Must-Not-Be-Named to make the next move in the wizarding world, and not a college student pondering the prospect of her virginity, I’ll just keep living my life to that motto.

One ice breaker I’ve experienced was sharing our worst hookup stories, so we could all bond over the universally hilarious and cringey aspects of hookup culture.

Once it was my turn, I had no choice but to divulge, “I’ve never hooked up with anyone, but my first kiss was nice!”

Who you’ve had sex with, who you are having sex with, who you aren’t having sex with—none of this defines you. Even though it can be easy to get caught up in the hookup culture, life is too short to do anything that doesn’t make you happy. College is even shorter. These four years will go by faster than you think. So, whether you’re participating in the hookup culture or not, make sure you’re doing it for you.

And remember, it’s never too late to leave the “You up?” text on read.

Calista Liu wants you to feel comfortable moving at your own pace.

You’re not the only one, get over yourself

Seriously? Leave her alone. She’s not saying she’s the only one, she’s just trying to represent a less popular perspective at this school. If you don’t like it then don’t read it or go get laid if this upsets you so much.

This ‘article’ is all fluff.

Keep your traditions and core values. Do not let IV Hook up culture affect you, and stay away from PERVERTS.

This is a very thoughtful and well put together piece, and as a fellow virgin I 100% with all your points:)

thank you for the article, I truly appreciate it