The Daily Nexus
Music
Modest Mouse Gets Weird at the Arlington
May 26, 2018 at 4:02 pm by Andre Bouyssounouse 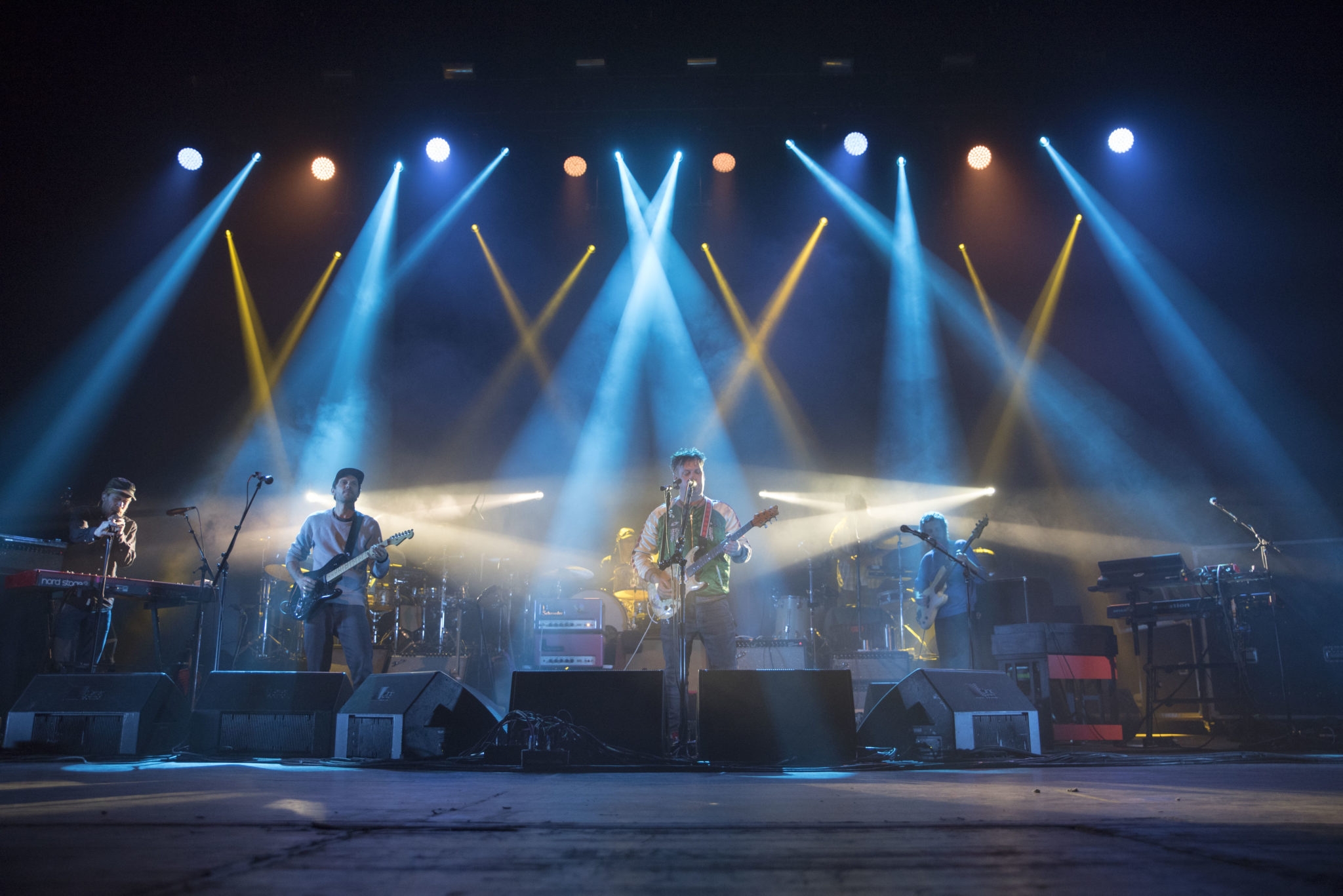 Last Saturday night, Modest Mouse played the Arlington. The marquee announced it in big red letters. The band, led by singer and guitarist Isaac Brock, had their heyday in the mid-2000s, but their pull was still strong enough to draw a pretty jazzed crowd that night. There are a lot of people in their thirties trying to look like people in their twenties; the phrase I’ve decided on is Uncle Hipster. This means trimmed beards and flannel for the fellas, t-shirts and jeans for the ladies. Some leather, not much. Tattoos, if extant, are concealed.

Under the marquee, people are clumped in twos and threes, taking pictures. I head over to the merch table, intent on spending money. T-shirts and hoodies are up on the wall. The designs are pretty weird, especially the one I end up getting: a deep blue t-shirt with a buck staring out of the center, neck and body mirrored left and right. MODEST MOUSE glows in green, blue and pink lettering which, combined with the neo-’80s typeface and mirrored deer, results in a sort of confetti psychedelia. That same shirt is everywhere inside, stretched over chests and peeking under hoodies. At what frequency does a faux-pas cease to be a faux-pas? I stash my shirt under-arm and head to my seat, where I sit until the openers come on around eight.

They’re called Mimicking Birds, a soothing, toothless indie-folk group. They play an hour of decently groovy stuff over blue and sea-green light. The singer thanks us and thanks us again for being there. Everyone claps indulgently. Mimicking Birds leave, and the shapes of the stage crew materialize on stage, testing wires and mics. The stage is dark for 20 minutes. Then the maintenance shapes leave and other, better-dressed shapes emerge, picking up guitars, twirling drumsticks.

The crowd cheers and claps. The stage lights up. Modest Mouse opens with “Ocean Breathes Salty,” a hit from their 2004 album Good News For People Who Love Bad News. Brock’s ironic, tongue-in-cheek presence surfaces in his banter and inter-song musings. A recurring concern is the hot sauce that he swears stings his eyes. “I had a taco earlier,” he explains, “with the hot sauce, and then I rubbed my eyes.” Someone brings him a towel several songs in, and he stands on stage dabbing his eyes with it. We cheer encouragingly. He goes on to perform a spirited, idiosyncratic show, though the towel makes several more appearances before the night is out.

They played a mix of earlier cuts and later hits, including “Dashboard,” “Missed the Boat,” “Fire It Up,” and “The World at Large.” A lot of Modest Mouse’s stuff is nautical-sounding (especially their 2007 album We Were Dead Before the Ship Even Sank), possibly inspired by Brock’s house flooding three times in his teens. 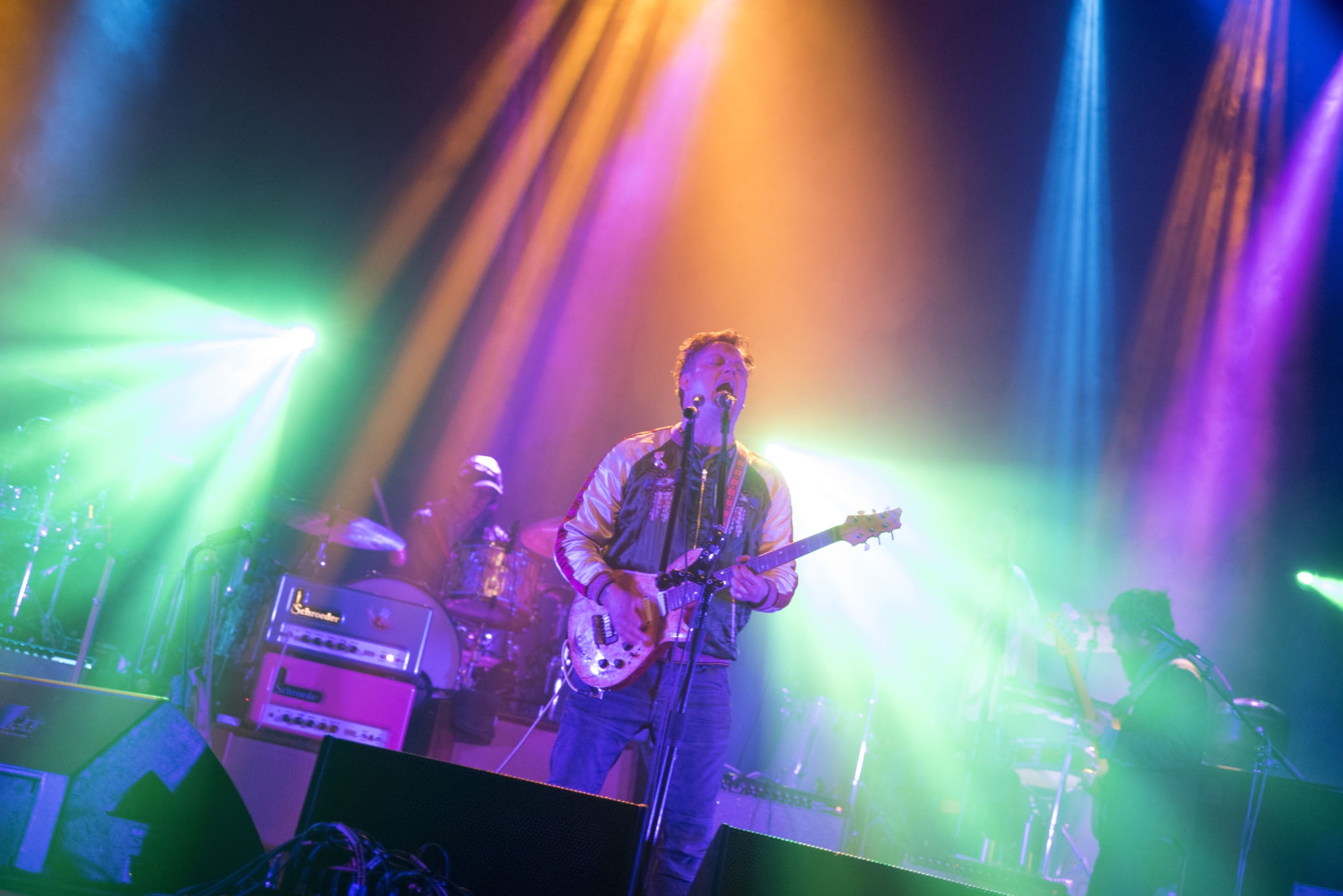 Their sound is a bit punk: catchy, shouty, angry, fun. Brock’s delivery defines their sound — his voice is somewhere between a yelp and a howl, conversational one second and guttural the next. Johnny Marr brought jangly guitar arrangements to their ’04 and ’07 albums, and the effect is propulsive and buoyant. The lights that night were cool, dynamic and synchronized snugly with the rhythm. A good mix of motion, color and strobe-y effects.

Conspicuously absent, however, was the band’s 2004 mega-hit, “Float On.” If you know one song by Modest Mouse, it’s that one. Brock’s decision not to play their biggest hit was disappointing at first, but, upon further thought, made more sense than the alternative, considering his abundantly weird stage presence and, judging by his interviews, presence in general. (One album promo features a mustached Brock interrogating a neck-braced Brock, who consults the lawyer beside him when asked questions like “Who are the members of your band?”)

Halfway through the show, Brock asks us how we’re doing tonight. We cheer, as audiences do. Brock looks disappointed. “Now,” he says, “when I ask you how you’re doing tonight, I want you to remain totally silent. It’ll be uncomfortable.”

A hush develops as the crowd tries to figure out why he isn’t playing “Float On.” People look around. Some clap.

“How are you doing tonight?!”

Scattered, defiant cheers. Brock, unfazed, repeats his question. “How are you doing tonight?” Most obey this time, not saying anything, except for some dudes a couple rows up. In their Aviators and OCBDs, they whoop-whoop into the silence of the theater. The moment’s over. Isaac Brock says, “This is turning into a different experiment than the one I’d envisioned.”

They did last night at Taft. In Cincinnati!

Who cares about float on, not their best song, highly played out anyway, fake fan