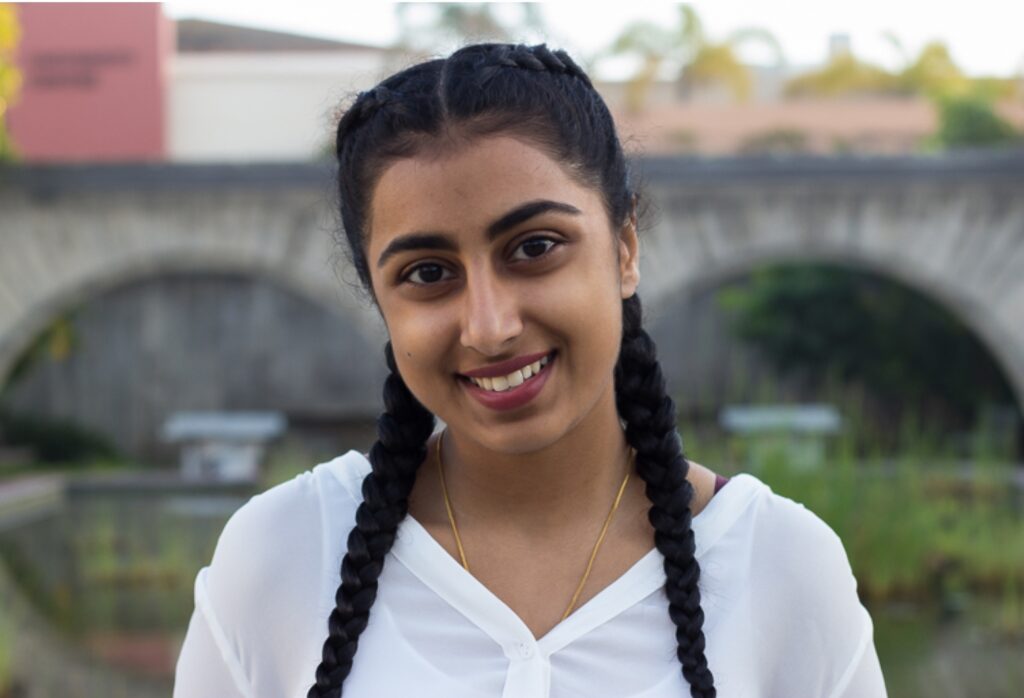 While Jasmine Sandhu feels grateful for the opportunities she has had to participate within Associated Students, she said serving as the 2017-18 internal vice president was the most rewarding.

Sandhu was elected to the position of A.S. internal vice president (IVP) during the 2017 Spring Quarter Elections after running with Campus United (CU).

She ran with the intent to streamline A.S. and improve communication between the Boards, Commissions and Units (BCUs) and the A.S. senators.

Before serving as IVP, Sandhu served as a College of Letters & Science senator within A.S. Senate. She also served as a student representative in the Internal Affairs Committee the year before.

Early on in her term, Sandhu said she had to adjust her approach to the position after realizing the weight of her role as a resource to the 25 senators in A.S. as well as her own office staff. This involved connecting senators with the resources they needed and giving them guidance as they worked to pass legislation and accomplish their personal projects and goals.

“I’d say my primary focus was really empowering the senators, and I feel like I did a pretty good job of doing that,” Sandhu said.

When training senators, Sandhu said she focused more on logistics such as legislative procedure and how meetings ran.

During the A.S. Senate retreat, she said she tailored senate trainings to include what was taught in previous years as well as tenets she believed were important to note as well.

Sandhu said some senators mentioned they could have used more direction, but she said it was mostly from those who did not attend the retreat.

“I think that I did a fairly good job,” Sandhu said. “I think they moved into the groove of being in senate faster than I’ve seen happen in the past.”

IVP is required to plan and attend trainings during their term, such as the Safe Zone/Queer 101 training which must be completed by the sixth week of Fall Quarter, according to the A.S. Legal Code.

Sandhu said in years past, such trainings weren’t usually completed by week six due to students still settling into their positions. Sandhu was home very frequently this year and at times needed to postpone the trainings due to personal issues.

“My mom got diagnosed with an illness so I had to be back pretty often,” Sandhu said. “Weekends that worked for me didn’t necessarily work for senators, so it was a lot of back and forth, and we just did not get to do that.”

One of Sandhu’s goals at the beginning of her term was to increase accountability, specifically by publishing quarterly reports of how student fees were being spent. Sandhu’s intent with the quarterly reports, after speaking with her student fee advisory commissioner, was to create a “color-coded, user-friendly” website similar to that of UC Davis’s.

However, the plan was halted after she received opposition from the Finance and Business Committee.

Sandhu also expressed pride in the accountability of the senators this year, especially in their work with BCUs, saying that there have been a “lot of positive reviews” unlike in previous years.

She credited her director of the legislative accountability, Greg Katz, as playing an important role in her ability to stay updated with the senators.

“He was just a really good director of legislative accountability,” Sandhu said. “He went to their office hours weekly and made sure they were there and talked to them about what they needed and what projects they were working on and how he could help or I could help in any way, and then he would report back to me each week and let me know what they needed from me.”

According to Sandhu, showing respect was an important part of making sure senators were completing their responsibilities and felt comfortable coming to her and Katz for help.

“We weren’t here to just say you’re not doing your job but rather to make sure they had all the tools necessary to do their job,” Sandhu said.

Regarding any projects she had planned but did not accomplish, Sandhu said she could have worked more on bridging the gap between the student body and A.S.

“Unfortunately most of my attention went to internal processes this year rather than bridging that gap, so I think I wish I could’ve done that more,” Sandhu said.

One of Sandhu’s proudest moments this term was watching senators speak to each other after tense meetings. After one particular meeting wrought with high emotions and heavy subjects, Sandhu noted all the senators were “very sweet” to each other.

“[Senate] has been very toxic in the past, so one thing I wanted to do this year was make sure that they knew they were all working toward the same goal of bettering the campus,” Sandhu said. “I don’t know if it was entirely me that went into play, but I think I did a fairly good job of maintaining that atmosphere, and they all took the initiative to continue to maintain that atmosphere.”

Steven Ho, a second-year biology and Asian-American studies double major currently serving as an on-campus senator, will succeed Sandhu as IVP for the 2018-19 academic year.