The Daily Nexus
Student Gov
Senate Fails to Vote on Divestment After Senators Walk Out of Meeting
May 17, 2018 at 8:50 am by Shomik Mukherjee and Simren Verma 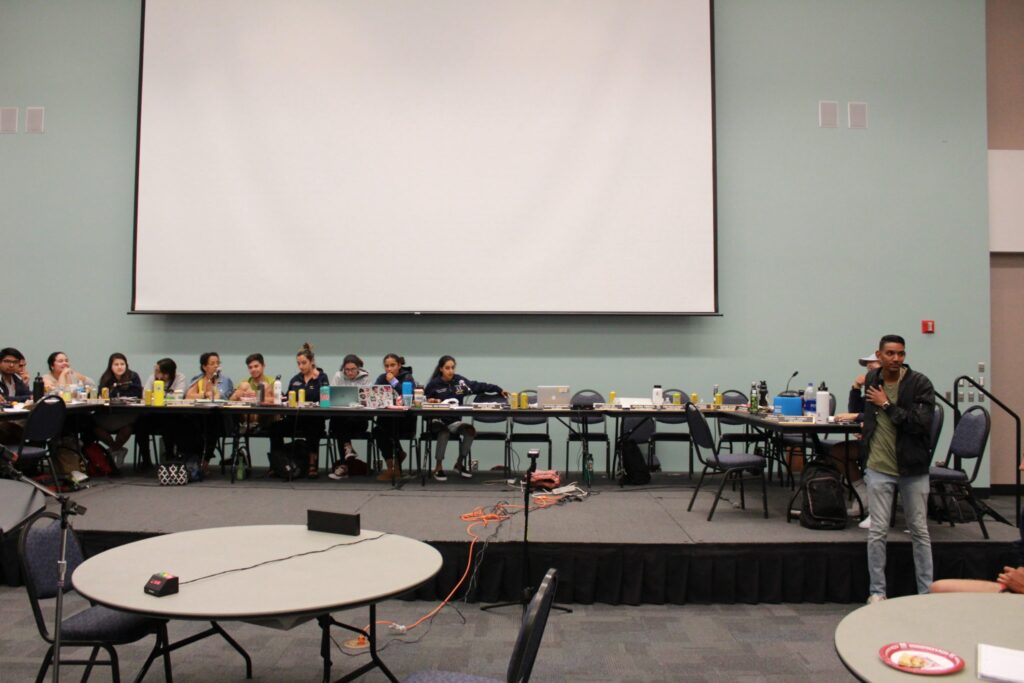 After a brief recess, 12 senators did not return to the table for the meeting to proceed. Megan Mineiro / Daily Nexus

A resolution to divest from companies that profit from alleged human rights violations in Israel and Palestine did not come to a vote at the Associated Students Senate meeting on Wednesday after 12 senators left — and never came back.

The controversial “divestment” resolution was brought to the table for the fifth time in six years on Wednesday, but 12 senators and proxies didn’t return to the over 10-hour-long meeting after a brief recess.

Senators disagreed on a specific element of the resolution, one that would have altered the number of “yes” votes needed for the resolution to pass. Following a prolonged standoff that divided the Senate nearly in half, the meeting abruptly ended just after 5:00 a.m., when Internal Vice President (IVP) Jasmine Sandhu announced that there were no longer enough senators to vote on the resolution.

“Our constituents were still here when people decided to leave,” Senator Grecia Martinez told the Nexus after the meeting. 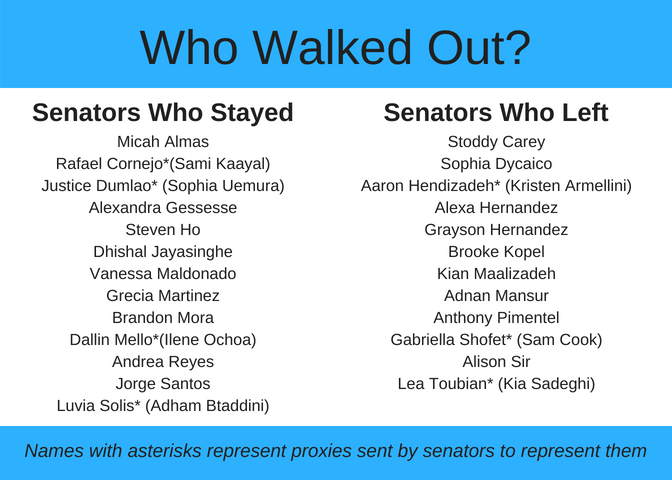 Some of the senators sent proxies, or substitutes, to attend Wednesday’s meeting. Sanya Kamidi / Daily Nexus

The resolution calls on UC Santa Barbara, the A.S. Investment Advisory Committee, the UC Treasury and the UC Regents to withdraw investments from companies “that provide military support to the occupation of Palestinian territories.”

Investing in companies like General Electric, Lockheed Martin and Northrop Grumman, which sell military equipment to Israel, shows “implicit support” for the killing of Palestinian civilians, the resolution states.

Eighty-nine speakers took the podium at public forum on Wednesday, the vast majority of them speaking about the issue of divestment and the Israel-Palestine conflict at large.

But the Senate never got to an actual discussion about the conflict. Instead, the senators fell into a disagreement after Ali Suebert, the A.S. attorney general, told the Senate at public forum that the resolution would be a “positional” and not “directional” piece of legislation.

A positional resolution “endorses, sponsors, or supports a group’s actions or events,” according to A.S. Legal Code. Typically, the Senate uses these resolutions to adopt an official stance on an issue.

A directional resolution, meanwhile, “directs members of A.S. Personnel, Boards, Committees, and/or the Senate to specific duties” and usually moves to create an actual effect.

Suebert pointed to individual parts of the resolution’s language, including a phrase about companies “profiting from human rights violations,” to justify her judgment that the resolution called for adopting a position.

That margin mattered to the divestment vote. Throughout the night, various votes to move the meeting forward stalled at 13-12. As a result, the Senate wound up discussing only the nature of the resolution itself and not its contents.

Ultimately, 13 senators did not want to approve the agenda, which would have codified the resolution as positional. Seeing that they wouldn’t budge, the other 12 senators did not come back from a recess, which forced an early end to the meeting.

The resolution was intended to be directional, Maldonado said at the meeting. She emphasized she and Mora did not want the Senate to assume a position on the political or moral issue at the core of divestment.

Copies of the resolution provided by A.S. at the meeting stated that the resolution was directional. Sandhu, who chairs the Senate and has the authority to adjust resolutions, later changed it to be positional. Suebert, the A.S. attorney general, deemed it both directional and positional when she spoke at public forum.

The resolution will now be pushed either to next week’s meeting, an emergency meeting or an email vote.

Gessesse added that she felt the walkout disrespected Sandhu as the Senate chair.

Senators who were approached for comment after walking out of the meeting asked to be contacted later in the day on Thursday.

Correction: A previous version of the graphic in this story listed Adnan Mansur as Sami Kaayal’s proxy. In fact, Rafael Cornejo was Kaayal’s proxy while Mansur attended the meeting as a senator.

The graphic also lists Ilene Ochoa as a senator who stayed. At meeting’s end, Ochoa was represented by a proxy, Dallin Mello.

Hi I would like to clarify inaccurate information on here. Adnan Mansur is a Senator and was not a proxy for Sami Kaayal. Rafael was proxying for Sami

It’s simple, this school profits from the blood of humans. Raytheon, Grumman… in turn, the school profits. I find it hypocritical that an institution who had a mass shooting in their backyard would have chosen the #notonemore hashtag. Not one more in your community gunned down but you support it in other communities? Disgusting. Well, this is the last UC to divest from companies making money from the apartheid in Africa, I guess no one should be surprised they value money over human life.

Gauchos work at these companies, and they aren’t going to come back and recruit our students if people keep demonizing them. Further, if you’re siding with BDS, you are siding with groups (like Hamas) who are advocating for the ethnic cleansing of Jewish people. It’s shameful our school is even considering this.

Merchants of death might not return to recruit mrore students? Tragic. I’ve certainly lost more sleep over this than the 111 Palestinians recently murdered by the state of Israel, including an eight-month-old baby with tear gas…

Two things: 1) Who brings an 8 month old baby to a riot? It stops being a peaceful protest when people are setting things on fire and throwing molotov cocktails. 2) A Gazan health official reported to the Associated Press that he doubts the baby died as a result of tear gas, and that she had pre-existing health conditions.

So you’re just gonna ignore the other 110 human beings killed? Even if the 8 month year old baby did have complications, that’s 110 souls that were murdered by the Israeli government.

Way to miss the point. Congrats.

Ilene Ochoa had a proxy at the time that senators left

It is, of course, widely known that Palestinian elementary kids are taught that they need to kill Jews and wipe Israel off the face of the earth. But that’s cool with all you ignorant students.

To punish a population wirh a 50-year military occupation, no matter what some of its individuals believe, is barbaric. Palestinians who oppose anti-semitism AND the occupation are being murdered; and millions of children are growing up with not enough food and water and no hope of ever leaving a 10-square-mile strip of land. There are some pretty scary beliefs that are common in the US, but obviously it would be bad (and illegal) if we were placed under occupation by a colonial despot.

“It was disappointing to see people who I would think are committed to this campus, especially in terms of their commitments next year, to not be committed to working through student issues when I’m obviously committed to working on these student issues” In what way is this a student issue? The other schools may have supported a divestment campaign, but the UC Board of Governors has made no action on it, nor will they. Divestment does nothing to improve Palestinian lives, nor will it hurt Israel the way they want it to. So really it’s just a symbolic gesture that… Read more »

Also it should be clarified that the reason the resolution wasn’t voted on is because 13 senators refused to accept the agenda and made it clear they were not willing to cooperate unless they got their way. Had they accepted the agenda and moved on then the other senators would not have left. There would be no point to keep all those people past 5AM when the conversation was clearly not going anywhere. I am thankful, as a student who was present, that they were able to end the meeting.

Hi I would like to clarify inaccurate information on here. Dallin Mello served as a proxy for Senator Ilene Ochoa after 11 PM and remained seating while various other Senators walked out.

Antisemitism alive and well at UCSB.

Fortunately, no one with any real power listens to our student government clowns

When you are a successful alum, the university calls you a couple of times a year seeking donations. I simply tell the callers that I am Jewish and refuse to support you spoiled racists.

Over 1,000,000 people have been killed in Muslim on Muslim violence in the Middle East. Why aren’t our senators addressing that?