The Daily Nexus
Science & Tech
Hippopotamus Dung Affects African Ecosystem
May 17, 2018 at 6:13 am by Stephanie Pernett 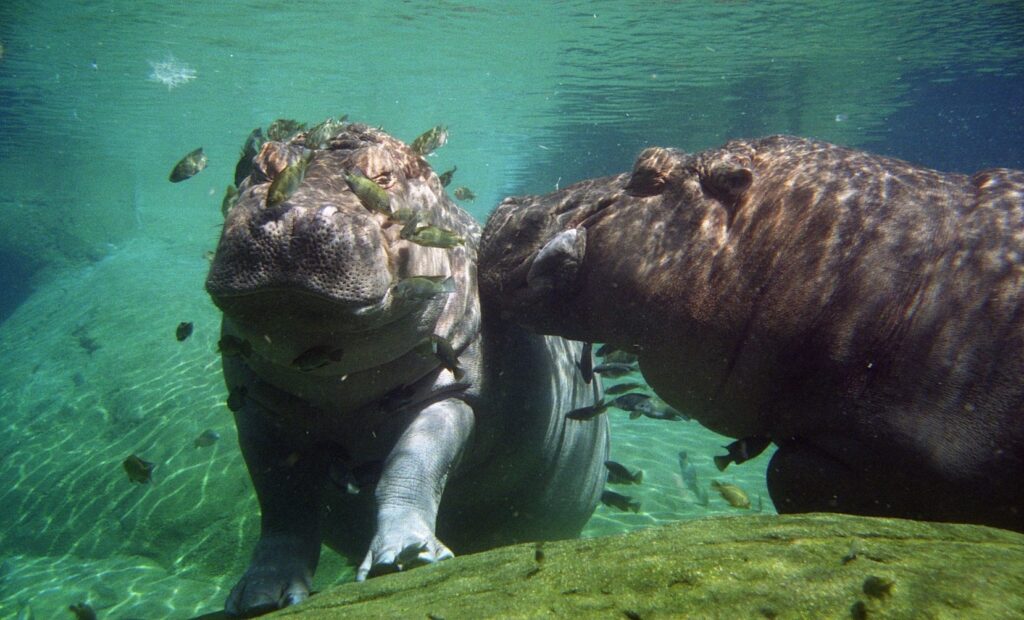 During the day, the 4,000 or so hippos by the Mara River in Tanzania return to rivers to keep cool and avoid sunburn. As they wallow, they constantly urinate and defecate, producing about 8,500 kilograms of waste a day.

In sub-Saharan Africa, deforestation, water-intensive agriculture and climate change are significantly altering water cycles and causing many rivers to begin to dry.

A recent study by UC Santa Barbara researcher Keenan Stears in collaboration with UC Berkeley and Sokoine University of Agriculture in Tanzania compared river pools with high and low densities of Hippopotamus amphibius, also known as the common hippopotamus, to determine how H. amphibius subsidies shape the chemistry and ecology of aquatic communities.

“This work explores how hippo dung shapes freshwater chemistry and links these changes to associated patterns of aquatic biodiversity change,” Stears, a postdoctoral researcher in UCSB’s Department of Ecology, Evolution and Marine Biology (EEMB), said. “It also illustrates that the net impact of hippos on river ecosystems is dynamically controlled by river hydrology and reveals the capacity of human disturbances on river flow to drastically alter the role of ecosystem-linking species.”

The hippopotamus is a semiaquatic megaherbivore which can weigh over 1000 kilograms, about 2200 pounds. These animals consume large amounts of terrestrial vegetation, around 40 to 50 kg of wet mass, during nightly foraging bouts. After these foraging bouts, the hippopotamus returns to their aquatic refuges and spends most of the day resting and defecating.

Over the course of their daily movements across ecosystem boundaries hippopotami deliver substantial, and continuous, supplies of terrestrially derived organic matter and nutrients, such as nitrogen and phosphorus, to aquatic ecosystems. While the magnitude of these biologically mediated transfers is clearly high, it is important to understand how these inputs shape the chemistry of recipient aquatic systems and how such shifts in turn affect the ecology of aquatic communities.

Stears and his colleagues conducted observations for multiple years over wet and dry seasons to identify how hydrological variability influences the impacts of hippopotami.

During the wet season, when the river was flowing, they detected no differences in water chemistry and nutrient parameters between pools with high and low densities of hippopotami. Likewise, the diversity and abundance of fish and aquatic insect communities were indistinguishable.

“During the dry season when there was no flow, the pools were completely separated,” Stears said. “We found a huge buildup of hippo dung, and therefore nutrient concentrations within high-density hippo pools. The high influx of nutrients caused the dissolved oxygen concentration to decline to sublethal levels for most fish species.”

Only a few species of fish and insects are able to survive in the hippo pools when the river dries, because of extreme losses of dissolved oxygen in these pools. Stears and his colleagues noted large reductions in fish diversity and abundance inside the pools that were overfueled by dung when river flow ceased.

“This suggests some kind of resilience within the system that allows it to recover after the hydrological disturbance every dry season,” Stears said. “This resilience signifies that there is hope for this system, but without intervention soon, the chronic stress caused by river drying and overfertilizing of hippo dung may cause long-term species loss in this river system.”

The Great Ruaha River in Ruaha National Park, Tanzania observed from the same vantage point during the wet season of 2015 (A) and the dry season of 2015 (B). During the wet season, flow connects pools in the river, whereas in the dry season, the river ceases flowing for several months every year. This results in large stretches of dry riverbed with isolated pools that are completely disconnected.

However, it appeared to promote aquatic invertebrate diversity. Widespread human-driven shifts in hydrology appear to redefine the role of hippopotami, altering their influence on ecosystem diversity and functioning in a fashion that may be more severe than presently appreciated.

Discerning the impacts of hippopotami upon this ecosystem is made more complex, and yet more important, because of its recent history of human modification. As has been documented elsewhere, hippopotami positively influence aquatic communities via nutrient provisioning during the wet season.

However, as river discharge wanes, hippopotami switch, especially at the local scale, from being providers of resources for aquatic communities to largely serving as an agent of over enriching waters, eutrophication and biodiversity loss.

The amplified negative effects observed during the dry season are likely new and may be shifting the balance of the net impacts that hippopotami have on watershed-level biodiversity.

This case study calls attention to the profound ways by which human alteration of environmental variables can drastically reshape the magnitude and directionality of species’ effects on the chemistry and ecology of the ecosystems they inhabit.

These findings also call attention to the profound ways in which the dry-season impacts of hippos may influence local communities that rely on rivers as a food source,” Stears said. “Tilapia are a commonly consumed fish throughout Africa, and, during the dry season, we found that the presence of hippos reduced tilapia abundance by 41 percent across the watershed. That’s not only bound to have ecological consequences but will also impact the human populations that rely on these rivers.”