The Daily Nexus
Tennis
Gauchos Fall to USC in NCAA Tournament
May 17, 2018 at 12:21 pm by Brandon Victor 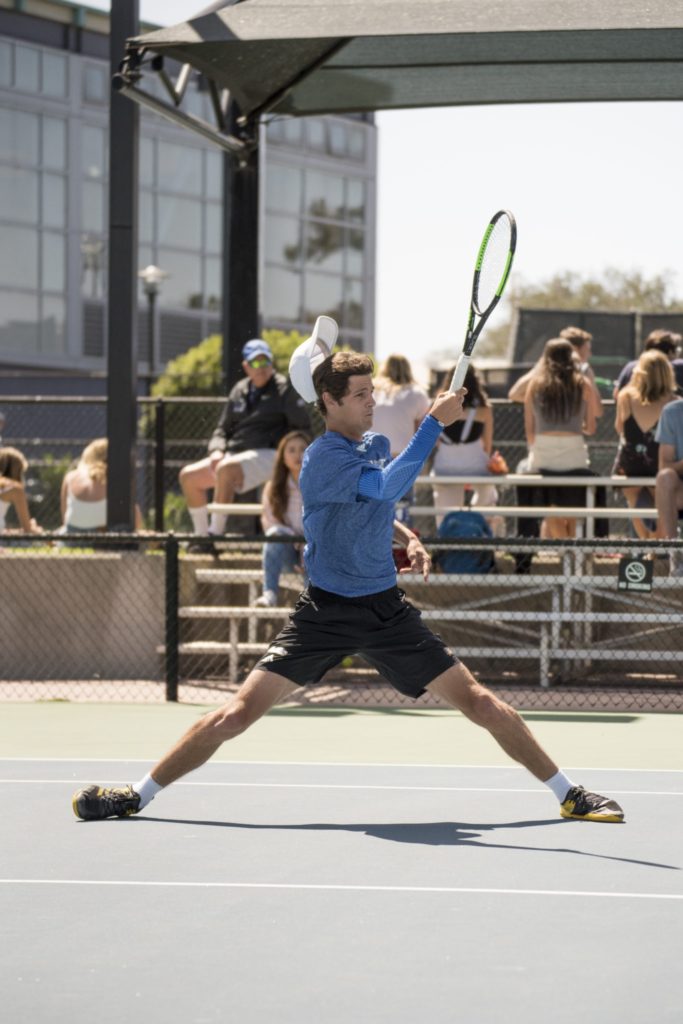 From the sheer force of running after the ball, Joseph Guillin’s hat falls off. Siavash Ghadirir/Daily Nexus

The UCSB men’s tennis team’s season ended in heartbreak on Saturday when the Gauchos narrowly fell to the No.10 ranked USC Trojans, 4-1.

Despite the score, Santa Barbara put itself in a prime position to win the NCAA tournament matchup. After dropping the doubles point and singles on court four, freshman Victor Krustev won easily on court six to bring UCSB within a point.

All of the other singles matches went to three sets, with the Trojans ultimately eking out victories on courts five and one to take the match before the contested matches on courts two and three could be decided.

“We put ourselves in a great position to win that match but didn’t get over the finish line,” Head Coach Marty Davis said. “That win would have covered the only two goals we didn’t accomplish: top 40 ranking and NCAA Tournament win.”

Regardless of the ending, this Gauchos team proved they had the character and skill to play with the top teams in the nation this season.

After starting the season 6-5 — with all five of those losses on the road — UCSB flipped a switch, winning 12 of their last 14 matches en-route to an 18-7 overall record. During that span, Santa Barbara picked up road victories over No.49 Washington and No.50 Loyola Marymount.

In addition, the Gauchos were dominant in Big West play, easily winning their fourth straight conference title and accomplishing the goal that Davis set for them at the beginning of the season. The team also set a Big West record by winning their conference games of a combined score of 43-0.

“The perfect score line in conference play is unbelievable, and a record that will never be topped,” Davis said.

This team also once again established something that avid college tennis fans have long known: they have one of the best fan bases on the entire west coast. Propelled behind a raucous crowd at every home match, the Gauchos finished the season 11-0 at home — their second time going undefeated at home in the last three years.

“The undefeated streak at home is a testament to our wonderful fans, many of whom made it up to SLO for our match with Cal Poly and to USC last Saturday,” Davis said. “The energy and atmosphere they provide is critical to the success we’ve enjoyed.”

Individually, UCSB also experienced breakout seasons from many of their unproven players. Perhaps the most impressive example is sophomore Joseph Guillin. After transferring from Florida, Guillin started the season at the No.4 spot on the court, slowly climbing his way up as far as the No.1 spot. Overall, he finished the season with a 19-2 record, including seven wins out of his last eight matches.

Krustev also left his mark in his first year: Despite not joining the team until January, Krustev finished 14-6 in singles play, and he and Guillin combined for an 11-4 record in doubles play on court three.

On court one, Moreno De Alboran went 15-5 on the season, winning his last eight matches on the season. His dominance during conference play also earned him the Big West Player of the Year Award, as well as a spot at the singles NCAA tournament.

Freund finished his career in fashion, winning his last ten matches in a row and finishing with an overall singles record of 17-5.

Looking ahead to the future, the Gauchos will return all of their starters except for Freund, priming them to be even more dominant next season.

In the meantime, however, the team will enjoy all they have accomplished this season.

“I’m extremely proud of the way this team represented our university, our alumni and our former team members … both on and off the court,” Davis said.