The Daily Nexus
Sports
UCSB In Must-Win Situation, Heads To Long Beach
May 10, 2018 at 5:05 am by Jorge Mercado 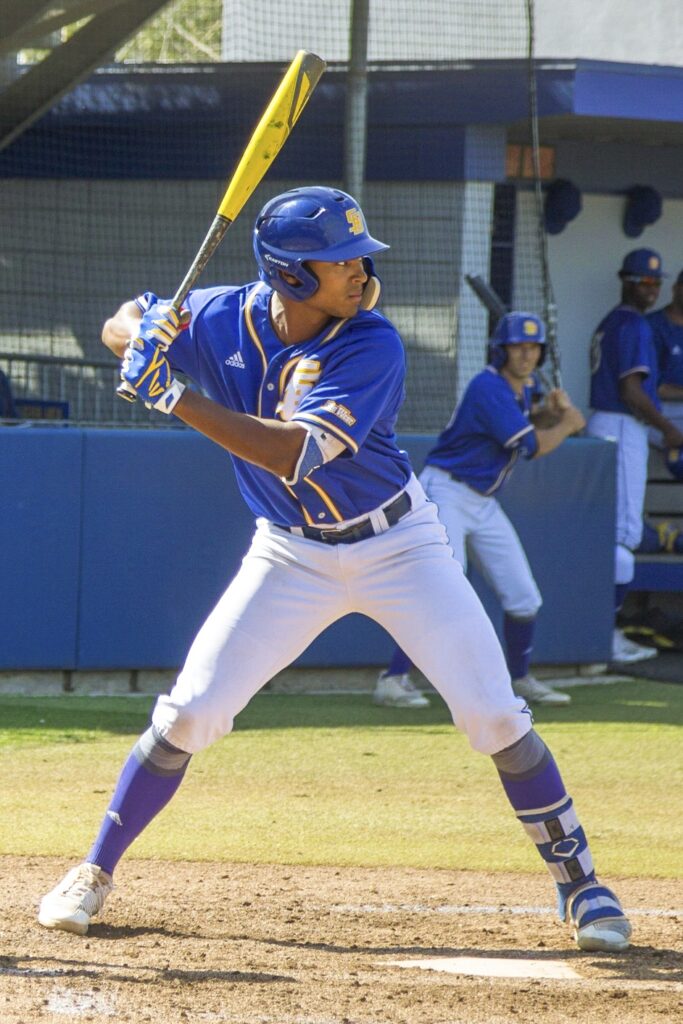 Armani Smith is ready for the ball to be pitched. Angie Banks/Daily Nexus

After dropping two out of three this past weekend to CSUN and losing two more games in a doubleheader against Pepperdine on Tuesday, things are really starting to look bleak for the UCSB baseball team and its slim playoff hopes as it travels to Long Beach State.

“We are hanging in there. Obviously we have been really frustrated the last few games feeling like we are right there and having chances to win the game, but we are growing up and we have to do it fast,” Head Coach Andrew Checketts said.

Currently sitting at 22-22-1 on the year overall and 7-8 in the Big West, Santa Barbara finds themselves at No. 6 in the conference standings and a good five games behind first place Cal State Fullerton.

With just nine games left in the league schedule and the almost certain fate that the winner of the Big West will be the only one to receive a NCAA Regional bid, UCSB is running out of time to lose any more contests this season.

“Winning out is our only shot. We are going to have to do that, and with the way Fullerton has played, hope they somehow lose some,” Checketts said.

Even worse, this weekend the Gauchos will be headed on the road to face the rival Dirtbags. On the road this season, UCSB is 4-10.

Conversely, LBSU is 11-12 at home this season and just recently defeated UCLA on the road, 5-1.

“We won at Blair Field two years ago, and it felt like that was the only time we ever did it,” Checketts said. “It is such a tough place traditionally, and wins are harder to come by so we need to be able to execute.”

One thing the Gauchos definitely have going for them, however, is their starting pitching.

Taking the mound on Friday will be senior right-hander Stevie Ledesma, who pitched a complete shutout game his last start, earning the win.

On the year, he currently has a 2.16 ERA, which is the second-best mark in the entire conference.

Usually a Friday starter, sophomore righty Chris Lincoln has been pushed back to Saturday as he tries to recuperate from a back issue that forced him out of his last start earlier than he would’ve wanted to.

His early exit resulted in a loss for the ‘Chos. On the year, Lincoln’s 2.35 ERA is the third-best mark in the Big West.

At the plate, sophomore Tommy Jew has been as hot as anyone, as he still has the best batting average on the team with a .301.

However, if the Gauchos want sustained success it needs bigger contributions from guys like sophomore Armani Smith, who has done a lot better as of late.

Despite his struggles this year, it’s clear Smith is still very much putting in the effort — a sign of good things to come.

“He’s hit for more power on the year with more doubles and homers, but he has also struck out more,” Checketts said. “He’s swung the bat better lately, and he’s a kid you root for. He’s a great kid so we are happy to see that.”

Like Santa Barbara, Long Beach State is also 7-8 in conference play and tied for sixth place, but they seem to have more confidence due to their four-game winning streak. Overall, the Dirtbags boast a 22-26 record on the year.

In their last four wins, LBSU has won by an average of 3.5 runs.

At the plate this season, Long Beach State currently has the worst batting average in the entire league, sporting a .243 average, but in the last four games has managed a much better .315 at the dish.

The Dirtbags also have two players currently batting above .300 on the season, which is always a nice luxury to have. Even more impressive is one of those two players batting over .300, junior Clayton Andrews, is also the team’s star pitcher.

Andrews currently sports a 2.58 ERA on the season which is the best mark on the team and fifth-best total in the conference while his 92 punchouts are the second best mark in the Big West.

This is the Rohnert Park native’s first season with the team; before this he spent two years playing at Cabrillo College where he was awarded with the league’s player of the year honors.

In his last start against UC Riverside Saturday, Andrews had a career day as he went registered four hits, tying his career high, with one RBI and struck out a career-high 13 batters in eight innings of work.

Due to his pitching performance, Andrews earned Player of the Week honors.

This weekend will be a tough one for the Gauchos, but at the end of the day, if they even want a chance to make the postseason, they need to win.

This team has grown a lot over the year, and no matter what happens, the future looks bright.

“There has been some growth and maturity with this team through our failures, and these next two weeks are going to be very challenging, but we have talent here. We just have to play hard, quality baseball, not worry about that outside stuff and we will be fine,” Checketts said.