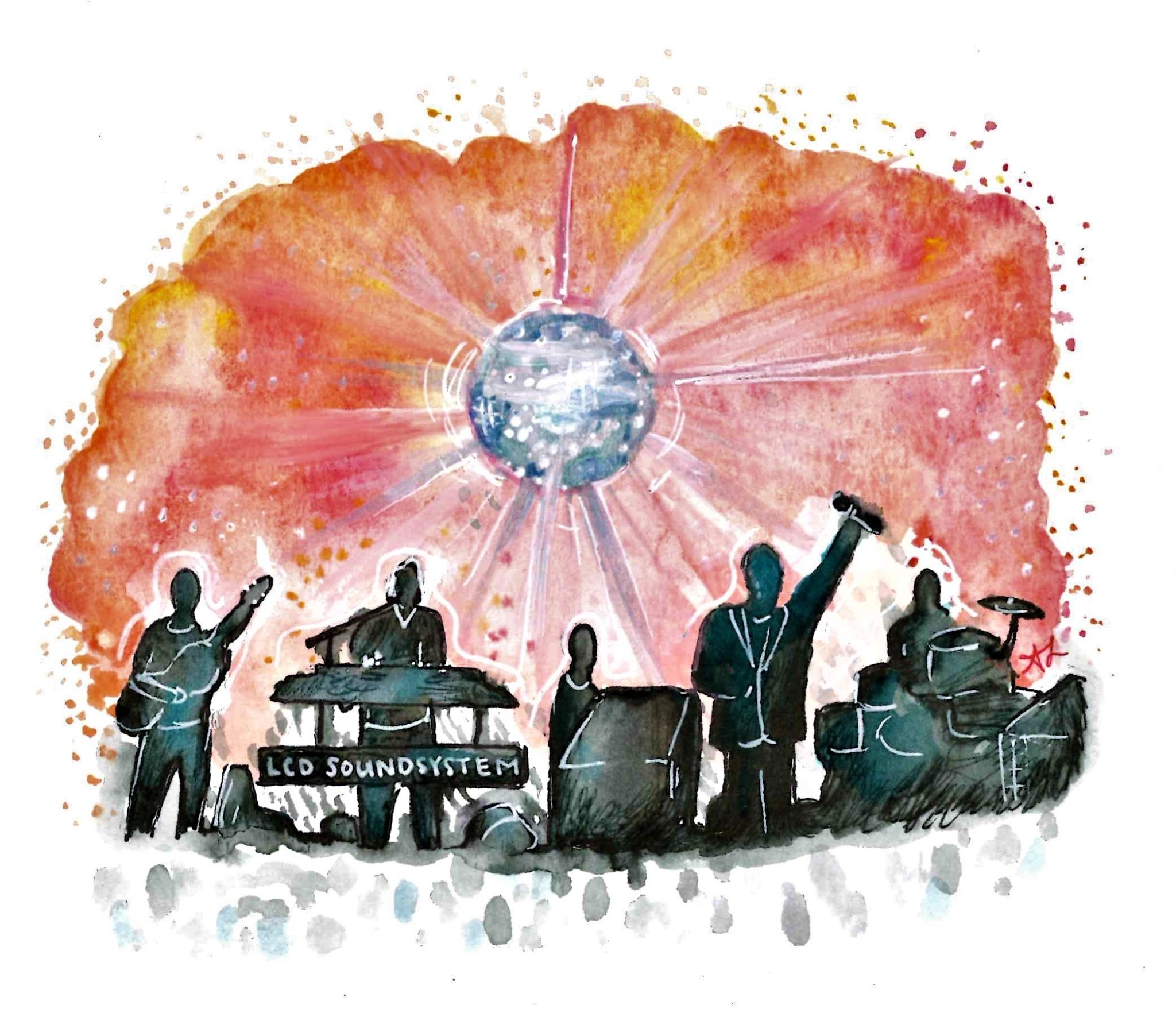 Showered in an abundance of glimmering lights and filled by a majority of middle-aged fans, the Santa Barbara Bowl was blessed with an outrageously effervescent performance by LCD Soundsystem. Despite likely having outgrown the post-punk sound that influenced the early releases of LCD Soundsystem’s music, those in attendance did not fail to immerse themselves in the show.

This past Thursday, the legendary, genre-bending group made a stop at the SB Bowl to put on a life-altering performance. LCD Soundsystem proved to continue maintaining a legacy which has earned itself a victory lap once it comes to a gut-wrenching end.

Prior to LCD Soundsystem gracing the stage, electronic duo Poolside kept the rhythm up for the few in attendance during the event’s beginning moments. A large disco ball hovered graciously above the stage, which suited the performance — Poolside labels their music as “Daytime Disco.” But as the sun began to set and the clock on the edge of the stage ticked, the audience became more and more anxious for LCD Soundsystem’s appearance. The groovy ballads could not contain the excitement lingering through everyone waiting.

The lights dimmed and frontman James Murphy approached the mic, accompanied by his seven bandmates, and thus, the mayhem commenced. As he stood there intensely, clad in messy scruff, unkempt hair, suit jacket and all, bodies swarmed and Murphy prepared to make the stadium his playhouse.

The band prepped the audience with an opening performance of “Yr City’s A Sucker,” a song which on the surface could pass as a track that is too downtempo to be an opener. LCD Soundsystem proved otherwise. And they continued to do so with each song, progressively captivating those in attendance more and more.

“Get your drinks from the beer garden and get the hell over here!” Murphy yelled at the crowd testing them as if to see whether or not they were up to the challenge.

Throughout the show, each song was more enticing than the last. The grandeur of their discography is remarkable as is, yet they managed to elevate each song to completely new levels by putting on phenomenal live rhythms. With a career that has endured since 2002, the years can reflect in one of two ways: the time can take a toll or their experience makes their performance even more efficient. Luckily, the latter seems to be the case. Murphy is relentless in his delivery, and with the support of immaculate instrumentals, his voice is carried swiftly through crowds. The impact of his vocals vibrated the audience and the slick guitar riffs intertwined with jam-packed drums to induce a head-bobbing atmosphere which resonated throughout the venue.

The presentation of LCD Soundsystem’s live display was mesmerizing. With each thump from the drums and each wave from the synth, a different colored light shot from the massive hovering disco ball out into the crowd and all over the trees. The backdrop was dreamlike, switching from a sheet of red to galactic patterns, both outlining Murphy’s silhouette perfectly. Coupled with ultra-danceable instrumentation, the beams of light created a fascinating atmosphere, overlaying the crowd’s lively, spirited fist pumps.

Up until a brief pause between two of their songs, nothing interrupted their elegant transition from track to track. This break was only made in order for Murphy to inform the crowd that the band would stop for a bathroom break very soon. “Don’t worry we’ll come back,” he said. “No need for all the encore chants.”

Aside from this, the only other time that their seamlessly pinpointed performance paused was for Murphy to announce the rest of the members’ names. He went through in an orderly fashion, naming off Tyler Pope, Pat Mahoney, Nancy Whang, Korey Richey, Matt Thornley, Gavin Rayna Russom and Al Doyle.

Shiny lights glistened as Murphy’s powerful voice sorrowfully begged in deep cut “I Can Change” off of This Is Happening. The crowd burst as Murphy bellowed, “We won’t be your babies anymore / We won’t be your babies ’til you take us home” during “You Wanted A Hit,” and they welcomed electrifying guitar riffs. In these moments, I could not help but realize how overlooked Murphy’s vocals are.

LCD Soundsystem played a number of songs, flipping through the plethora of hits which they have created. The band tapped into some of the new contemporary highlights from their catalog such as “I Used To” and “Tonite” from American Dream, in which Murphy’s voice continued to pierce through the bodies that stood in amazement. “Get Innocuous!” from Sound Of Silver was a standout moment. The live interpretation of this song was enthralling as Whang chanted, “You can normalize. Don’t it make you feel alive?” and lights flashed on and off. When the stadium turned black for almost a split second, one could feel the intensity of the crowd’s desire for more.

By the end of the night, LCD Soundsystem had proven that my expectations paled in comparison to what was to come. A wonderful setting with incredible music was the perfect combination. At the SB Bowl, the stakes weren’t high for an audience filled with fans, but Murphy remained consistent and demonstrated the mastery which deems LCD Soundsystem as a legendary band — proving that they can probably do this forever.