The Daily Nexus
UC News
AFSCME Strike Comes to an End, A.S. Passes Resolution in Support
May 10, 2018 at 12:01 am by Evelyn Spence 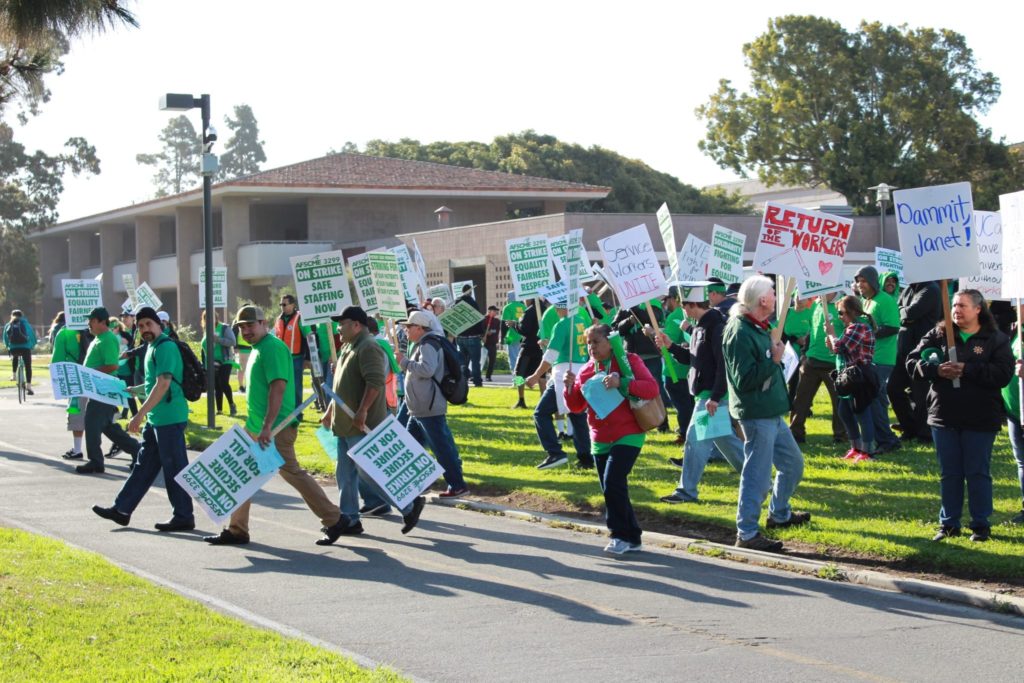 The resolution, authored by Off-Campus Senator Alexandra Gessesse and On-Campus Senator Vanessa Maldonado, called for Chancellor Henry T. Yang to state his support for the union to the University of California Office of the President (UCOP).

“I authored the resolution because I have high respect for our custodial/maintenance workers here on campus,” Gessesse said. “By cc’ing Chancellor Yang, we want direct action, a statement that shows his support for the workers on campus to the Regents, UCOP and other agencies written on that resolution. I believe it’s pertinent to this movement.”

“This strike should not be overlooked,” she added.

More than 200 workers and student supporters marched around campus several times throughout the day, chanting and holding dozens of handmade signs.

This is the largest strike in the history of the UC, according to an AFSCME press release on Wednesday morning.

The resolution references data from a report AFSCME 3299 released in mid-April, which states that black and Latinx employees are making starting wages that are 20 to 21 percent less than their white counterparts.

AFSCME voted to strike following more than a year of negotiations with the UC. Currently the union represents over 24,000 workers, according to the union’s website.

“UC workers are going on strike to fight for their right for dignity and respect in the workplace in which negotiations for their right to sanctuary campuses, fair hiring practices, and an ending to contract practices that push womxn and people of color, especially into inescapable low wage jobs,” the resolution reads.

“AFSCME leaders are demanding a nearly 20 percent pay raise over three years — twice what other UC employees have received. The university cannot justify to taxpayers such an excessive raise, no matter how much we appreciate our service workers,” UCOP’s press release states.

“A disruptive demonstration will change neither UC’s economic situation nor the university’s position on AFSCME’s unreasonable demands,” the press release reads.

As of Wednesday night, the university has not sent out a statement addressing the end of the strike.

“[The A.S. Senate] calls on the UC Regents to stop making cuts on the backs of its lowest-paid employees,” the resolution states.

A version of this article appeared on p.4 of the May 10 print edition of the Daily Nexus.