The Daily Nexus
Sports
UCSB Seeking To Gain Conference Edge, Hosts CSUN
May 2, 2018 at 11:39 am by Jorge Mercado 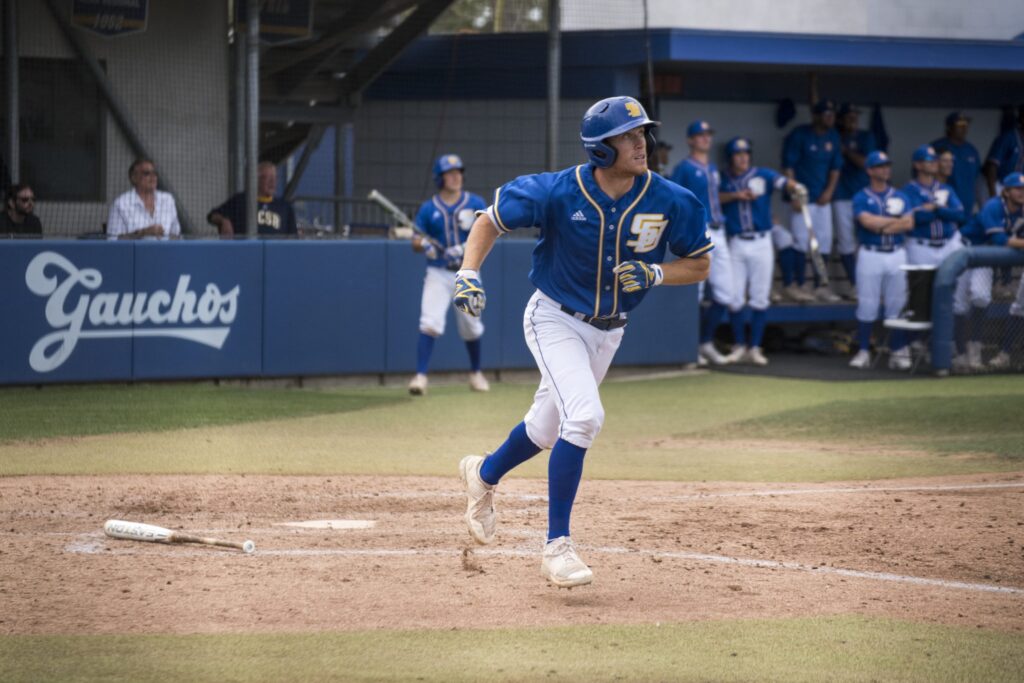 Running to first after making contact with the ball. Siavash Ghadiri/Daily Nexus

With a .500 record through conference play thus far, the UCSB baseball team is in need of a few more Big West wins if it really hopes to come out with the crown this season.

The Gauchos, coming off a solid 9-5 victory at Cal State Bakersfield this past Tuesday, currently stand at 21-18-1 overall and 6-6 in the Big West conference. This week, they welcome Cal State Northridge, who has struggled this year, posting a 19-24 overall mark and a 7-8 conference record.

CSUN, just 8-13 on the road, is coming off a big series win against Hawai’I, who is currently third in the Big West standings. Before that, the Matadors had lost five of their last six conference games being swept by UC Irvine and dropping two of three to last-place Long Beach State.

On the other side, UCSB picked up a big series win against UCR at home last weekend but failed to pull off a sweep which would have put them in a much better place heading down the stretch. The Gauchos can correct that with a sweep, or at the very least, a series win over CSUN.

Currently in fourth place, Santa Barbara has 12 games remaining against conference opponents, nine of which will be against teams currently ranked lower than them in the standings, including Cal State Northridge.

Needing wins, UCSB must rely on some of its key components in order to get the job done this weekend against CSUN.

Having an unusually down year, sophomore infielder Armani Smith has struggled at the plate. The sophomore is barely batting above .200 on the season. However, in the last five games, Smith has gone 6-16 (.375) at the plate along with eight RBIs. He also hit a three-run big fly in Tuesday’s win against CSUB, his fifth homer of the season.

If Smith’s big bat is back in action in the lineup, then UCSB truly has a solid starting nine. Sophomore centerfielder Tommy Jew has also been a great bat in the Santa Barbara lineup, currently slashing .294/.382/.451 on the season.

One thing UCSB will need to be cognizant of, however, is their pitching, as it allowed 24 runs against UCR and another five against CSUB. Sophomore Chris Lincoln (2.19 ERA, 2-2) and senior Stevie Ledesma (2.55 ERA, 5-2) have the second and fourth-best ERA marks in the conference respectively.

As a team, the pitching staff has a combined 4.10 ERA, and they will have their work cut out for them facing CSUN with their team batting average of .281, the third-best mark in the conference.

In fact, the Matadors also have the third best on-base percentage (.364) and even the best slugging percentage (.459) in the conference. A big part of that is because the Matadors have arguably the best long-ball hitter in the Big West in senior Albee Weiss.

The outfielder and catcher currently has 15 home runs on the season, a mark that is not only far and away the best mark in the conference but also sits at eighth nationally. Weiss also has 48 RBIs, the top mark in the Big West.

CSUN also has the conference’s most efficient hitter as redshirt junior utility Trevor Casanova currently boasts a .380 batting average. Casanova also has 27 RBIs on the year. As a team, Cal State Northridge has three athletes batting above .300 on the year.

While the whole series will be intriguing, seeing how UCSB pitchers adjust to facing a strong offensive team will be a real treat. To be fair, however, CSUN has batted .257 in conference play, a mark that has them sitting seventh in the conference, so something will have to give.

For UCSB, this series is important because they have another chance to really step on the throat of a team that is a bit weaker than the rest in this conference. With CSUF sitting with a 9-3 Big West mark, Santa Barbara cannot afford to take many more losses in this conference season.

Santa Barbara hosts Cal State Northridge for a three-game set beginning at 3 p.m. on Friday, May 4, at Caesar Uyesaka Stadium.