The Daily Nexus
Sports
Unwavering Unity: A Look Inside The UCSB Women’s Rugby Team
May 1, 2018 at 4:42 pm by Kendra Jackson 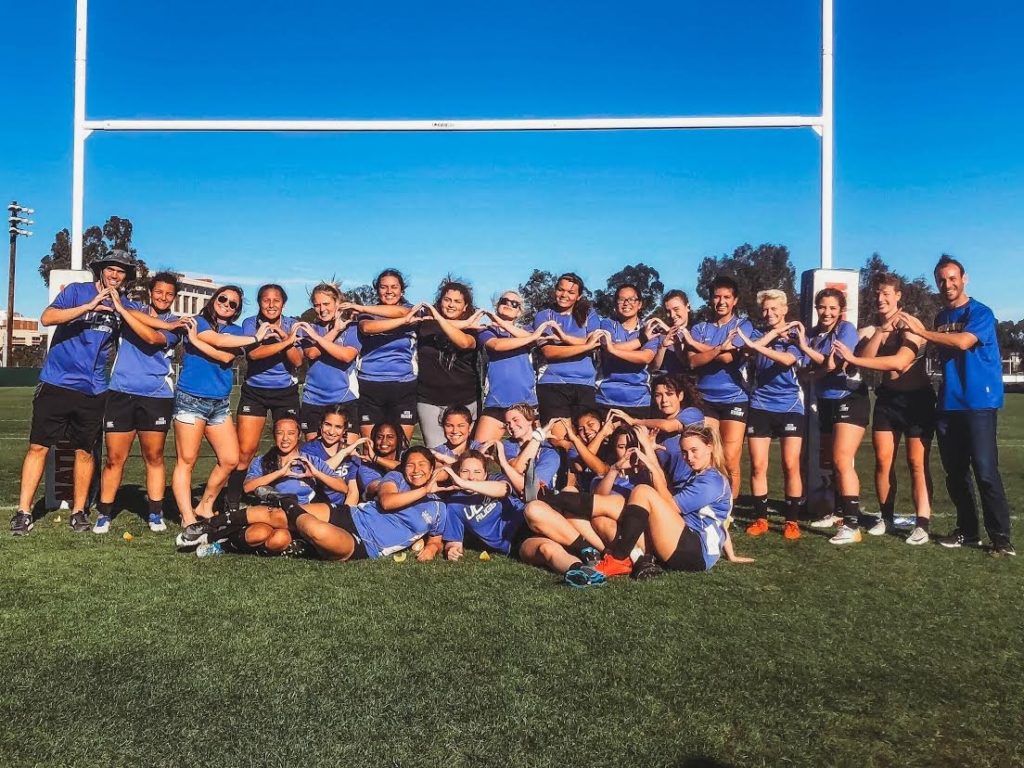 Intensity. Determination. Unity. These are just a few words that sum up the UCSB women’s rugby team. While rugby is a sport that is widely popular, many don’t know that we have an incredible women’s team on campus.

I got to sit down with a few of the ladies from the team as we discussed their motto of unity, how playing such an intense sport brings meaning to their lives, and how lacking sufficient school funding makes them rise above the rest.

Going just 2-4 in the regular season last year, the team found solace in their new head coach Zac Winter this season, who helped implement new practices and work hard to turn the team around.

He certainly did his job well as the rugby team was nothing short of amazing this year, beating nearly every team in their way. Loaded with passion and exuding confidence, you’d be hard pressed to find another sport with athletes as driven as those on the UCSB women’s rugby team. With six seniors on the roster set to graduate, it was only appropriate that the team put on such a dominant performance in the regular season.

Ending second in the league with an 8-3 record, the Gauchos were not able to carry that magic into the postseason as they lost to opponent Chico to end their journey to the championship. The team is not discouraged though, as they all mentioned that there is nowhere else for them to go but up.

Rugby is a sport that requires precision, aggression, and players who aren’t afraid to get dirty or risk injury. “We do get crazy injuries, and if anything, we’re proud of them,” Sophomore treasurer Kayla Aurelio Hughes cleared up, “But there is so much more to our team and our story than just concussions and broken thumbs.”

The team admitted that while the susceptibility to injuries is sometimes imminent, it makes the playing of the sport that much more enjoyable. No matter what happens to a teammate on the field, there is always another teammate right behind, ready to help with whatever the other needs – both on and off the field.

Junior Jasmine Guevara pointed out that rugby has played a huge role in her life and her social circle: “When I first got to UCSB, knowing how shy I am, I honestly thought I wasn’t going to make many friends if not any. And here I am two and half years later, loving the sport and having more friends than I could have ever asked for, friends I know I can count on and off the field.”

Unity is something the ladies make clear is the basis in all that they do, not leaving anyone behind. In a world full of inequality, the morale of the Gauchos women’s rugby team embeds the notion that their team is no place for any hate or opposition – unity and acceptance is all they know.

Sophomore Maria Tejada gushed about the team’s motto of unity when asked about how it defines the team. She explained that “unity is the theme of our team for so many reasons. We win games because of unity, we work hard to come back from injuries because of unity, and we are extremely accepting because we have big hearts and because of unity.”

While the team’s unity and standout aggressive play is not to be overlooked, often times they find themselves dedicating a lot of time to off-the-field activities as well. Funding is something UCSB women’s rugby works hard to keep steady, as they don’t receive as much school funding as several other teams on campus.

“While we do get some funding from Rec Sports to help pay for coaching, we mainly rely on dues from players and fundraising,” senior Social Chair Haley Pedersen revealed, “It’s just an additional stress that gets in the way of our team growing. Fundraising can be hard because all clubs are trying to do the same fundraisers and when it comes to getting donations, there are a lot of people who do not support women playing rugby.”

Despite the need to be assertive in their fundraising practices, the team makes sure not to let money concerns stop them from playing the sport they love. Senior Fundraising Chair Miranda Nillo optimistically noted that “since [The rugby team is] pretty much autonomous, it puts a lot of pressure on team leaders as far as what we decide to spend our money on. However, even though we’re not primarily school funded, we do know that the girls who do want to play rugby are willing to pay for it and are here for a reason! We’re all so passionate about rugby!”

The heart of the Gauchos’ women’s rugby team is palpable, and their fortitude is unmatched. The cohesiveness of the group as a unit, translates through their superior play both on and off the field in all that they do. Women’s rugby not only participates in various fundraisers for their own team dealings, but they also consistently offer their time and effort to various charity events, giving back even whenever they can.

The team is a well-oiled machine, with each member playing a pivotal part in keeping their success afloat. Hughes admired her team’s heart and ability to stay strong no matter what. She made sure to note that, “the girls keep the program running. I am so grateful to play with a group of driven, motivated women who don’t let anything get in their way.”

The Gaucho’s women’s rugby team proves that there is insurmountable strength in numbers, by displaying toughness through their unwavering team unity and proving that division is an unwelcome team weakness. Working together as a supportive unit, aids the team in accomplishing their goals together on the field and throughout their college career. Balancing school, sports, and jobs, these are some of the most talented women at Santa Barbara that you’ll ever meet.

No team, funding issues, or opposition can stop the UCSB women’s rugby team – they are determined not to let anything get in their way.