The Daily Nexus
News
Bertrand Denies Conflict of Interest in Bid for Government Job
April 26, 2018 at 1:24 am by Shomik Mukherjee

Isla Vista official Ethan Bertrand voted on Tuesday to nominate himself for a paid government agency position, which might raise concerns over government conflict-of-interest laws. 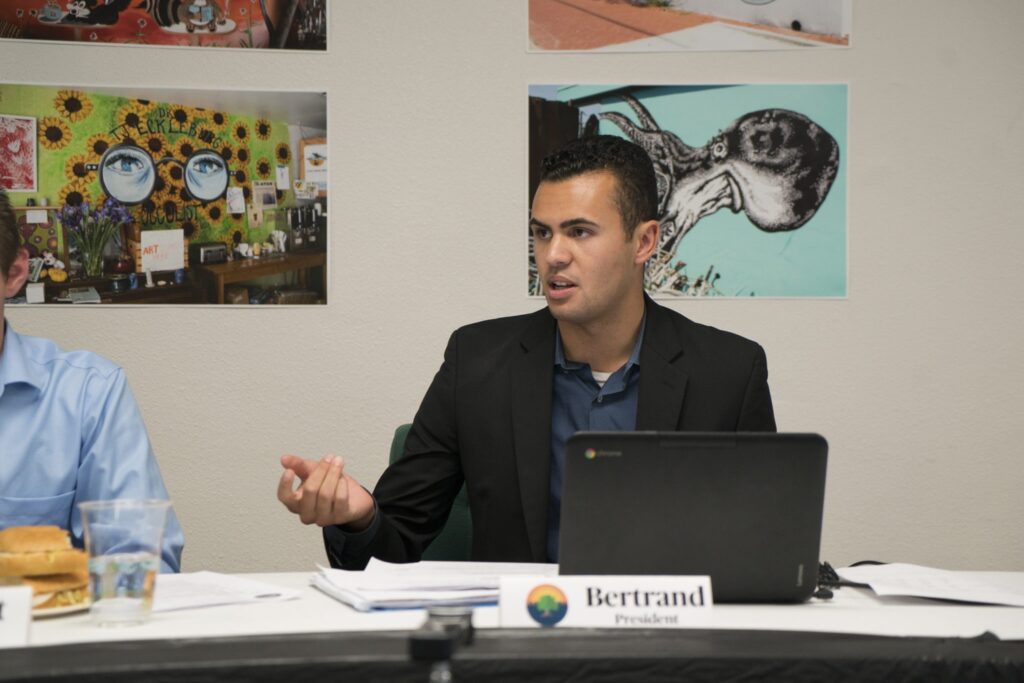 The position Bertrand is running for is the “alternate special district member” on the Santa Barbara Local Agency Formation Commission (LAFCO), which oversees special districts in the county. Sicheng Wang / Daily Nexus

Conflict-of-interest rules state that a public official has a “disqualifying conflict of interest” in a government decision if it is “foreseeable” that the official could be financially impacted by the decision.

If a public official might be financially affected by a decision, they must recuse themselves from the vote in order to avoid bias, according to the rules, which come from the California Fair Political Practices Commission (FPPC).

There are exemptions, but none of them appear to apply to Tuesday’s vote, which took place at the I.V. Community Services District (I.V. CSD) meeting.

The position Bertrand is running for is the “alternate special district member” on the Santa Barbara Local Agency Formation Commission (LAFCO), which oversees special districts in the county.

As people move into cities, the LAFCO makes sure spaces remain open and resources are protected. An alternate member takes part in LAFCO affairs when the regular members cannot be present or need to recuse themselves. For each meeting attended, the member makes $150 without benefits.

Bertrand secured the nomination with four “yes” votes, one “no” vote and two abstentions.

If Bertrand had not voted for himself and instead abstained, he would not have received the nomination.

The FPPC didn’t offer a direct opinion on the matter since “only an investigation determines whether violations have occurred.”

“Generally speaking, the responsibility is on public officials to avoid conflicts,” Jay Wierenga, the FPPC communications director, said in an email. He went on to say officials are recommended by law to avoid “even the appearance” of conflicts.

“I had to leave, I left, I recused myself,” Seymour told the Nexus. “I can’t vote for myself. By going to LAFCO, there’s financial conditions and so you can’t do that. That’s against the law.”

At Tuesday’s CSD meeting, Bertrand introduced his intent to run for the vacant position on the Santa Barbara LAFCO. While fellow directors Robert Geis and George Thurlow immediately mentioned and seconded a motion to place him in the position, Bertrand faced hesitation from director Jay Freeman.

Freeman told the board it should throw its support behind Seymour, citing Seymour’s experience in and around LAFCO through the years.

To that end, Freeman noted LAFCO’s emphasis on nitty gritty aspects of the larger county and said it would look bad if the I.V. CSD nominated someone who hadn’t attended enough LAFCO meetings.

Going for this position would spread Bertrand too thin, Freeman said.

“I like that you’re excited to do this, but it seems like a stretch given all you’re doing here,” Freeman said.

Bertrand defended his qualifications, saying the LAFCO needs more younger folks and people of color in the way of diversity.

He later told the Nexus that he has attended “quite a few” LAFCO meetings “over the past couple of years.”

Thurlow stepped in, telling Bertrand to step down from facilitating the discussion since he had a direct interest in the outcome.

Particularly, Thurlow said Bertrand should recuse himself from running the meeting, but “not necessarily from voting.”

On Wednesday, Bertrand stood by his decision to vote on the matter.

“I still believe that what I did was within my rights and responsibilities,” he told the Nexus. “I’m still comfortable with it.”

In the actual election between Seymour, Bertrand and any others nominated by their special districts, it would be the districts themselves that decide who gets the position.

There are 37 special districts in the county and each of them will have a vote.

In a similar situation in January, recently-elected Santa Barbara Mayor Cathy Murillo voted to replace a fellow city councilmember with herself on a countywide transportation board, Noozhawk reported. The council’s final vote was 3-2 and Murillo’s vote for herself ensured her board membership.

Members on the board in question make between $2-3,000 per year, according to data provided by Transparent California.

A version of this article appeared on p.1 of the April 26 print edition of the Daily Nexus.

Correction: The story previously referred to the LAFCO position as a “paid position with Santa Barbara County.” While it oversees the entire county, LAFCO is not directly tied to the County of Santa Barbara.

In addition, the story previously said Bertrand told the Nexus he attends LAFCO meetings quite often. His exact words were, “I have attended quite a few over the past couple of years.”

Not to mention a paid member of the Salud Carbajal Campaign !