Candidates running for on-campus senator positions on the Associated Students Senate took the stage on Thursday in the Hub to present their qualifications. 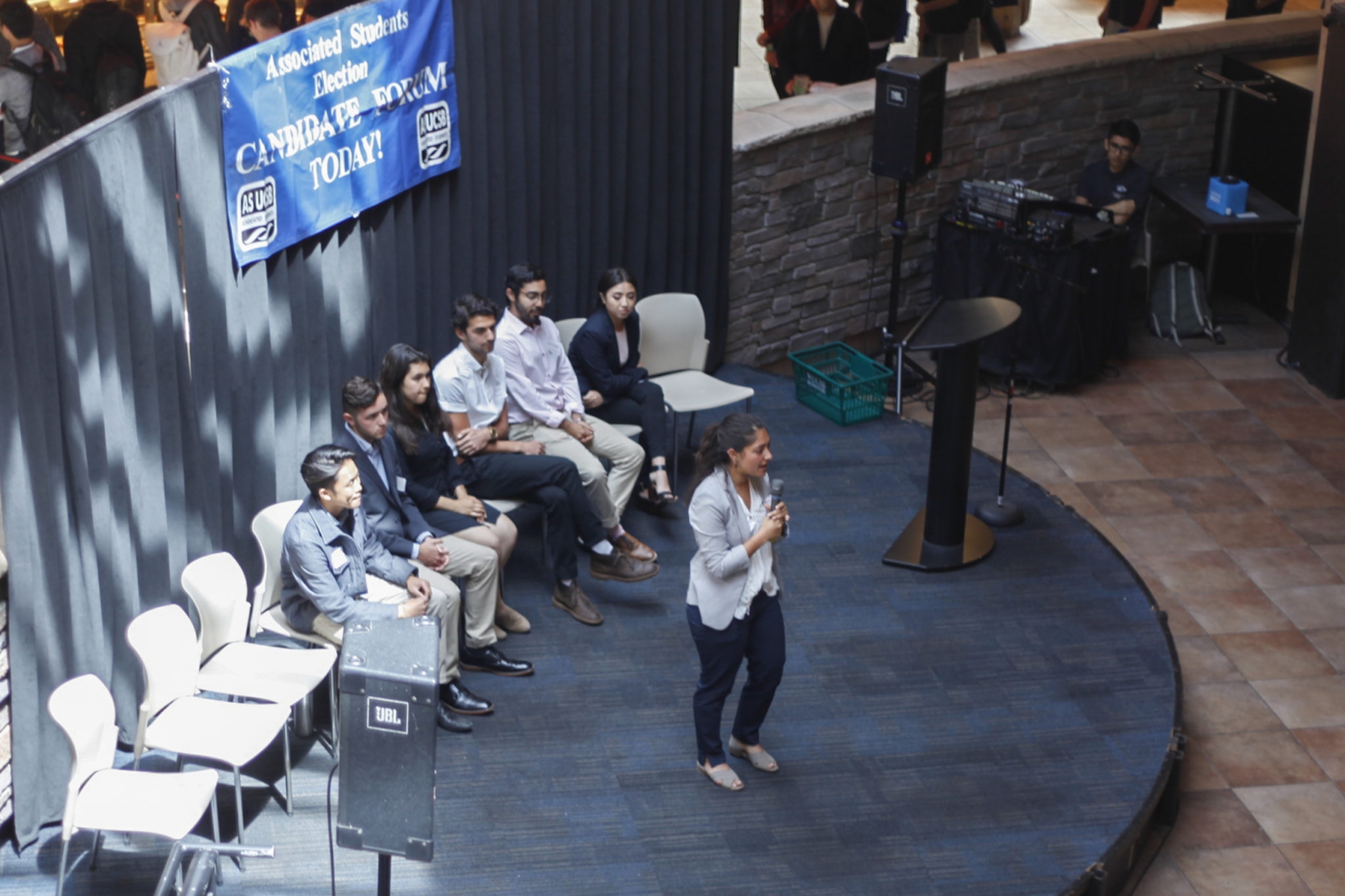 Senators give their platforms during the forum. Lianna Nakashima / Daily Nexus

Yash Nagpal, Sam Malamed, Lea Toubian and Eric Moon are running with Campus United and Joel Medina is running with the Isla Vista Party for the five on-campus senator positions. Active campaigning for all candidates began on Thursday.

Below are the candidate’s priorities and plans if elected:

Nagpal wants to decrease indirect student costs and work to expand the Textbook Buyback Program so students get 80 percent of their money back. He would also like to work to install charging stations around campus.

Medina wants to implement a “backdoor” policy for C.A.P.S. which would allow students who might be visibly anxious to be able to come into C.A.P.S. without anyone seeing them.

Moon is interested in collaborating with the External Vice President of Statewide Affairs (EVPSA) office and the Lobby Corps to fight tuition hikes and said he plans to write resolutions to support their efforts.

Malamed said he wants to ensure that students have access to feminine hygiene products and contraceptives in the residence halls so students are relieved of the burden of any additional costs.

In an effort to increase accountability and transparency on campus, Toubian wants quarterly teacher evaluations to be publicly posted so students can make informed decisions when picking classes. If there are recurring problems with a professor, Toubian said she wants students to be able to hold the administration accountable.

Moon said people might not feel safe calling the police because they are worried about being penalized, but said he wants to increase students’ awareness of the policies that do not punish people reporting issues like drug or alcohol overdose.

Toubian wants to expand the Community Service Organization (CSO) escort system as she once waited alone for 45 minutes for a CSO officer. She said she also wants to create a shuttle service to and from I.V. in university-owned vans or buses.

Medina wants to institute a shuttle system between the Santa Catalina residence halls and the main campus as well as provide carts or vehicles to CSOs so they can better help students get home safely.

Malamed said he wants to increase the number of on-campus students on the Sexual Assault Board and work with the Residential Housing Association to ensure students on campus feel safe reporting sexual assault.

Nagpal said he wants more students living in the residence halls to know about resources like Campus Advocacy Resources & Education Center as well as expand the blue light system on campus and in I.V.