Candidates running for the collegiate and transfer senator positions gave their platforms at the candidate forum at the Hub on Tuesday during the second day of campaigning. 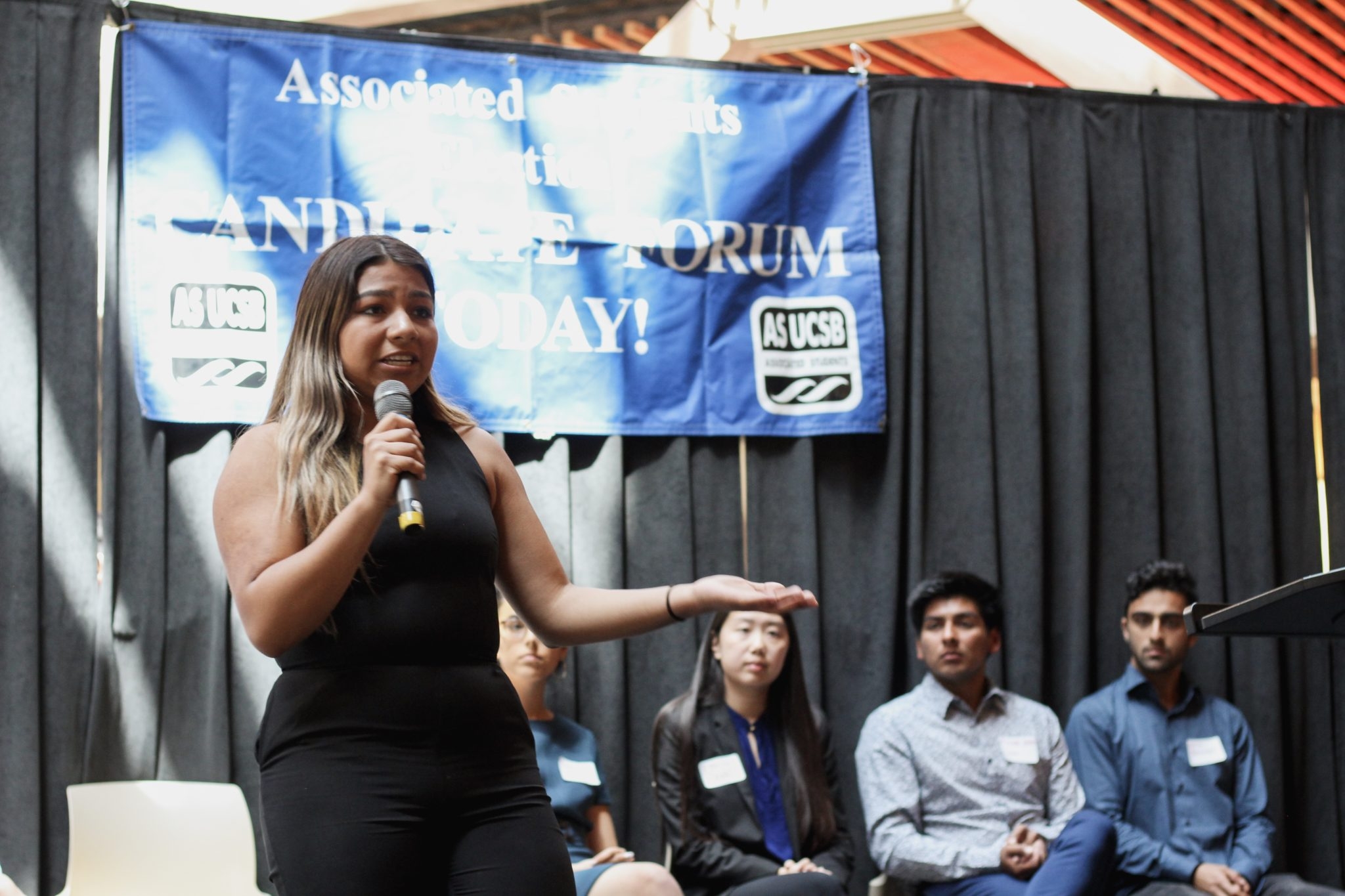 Juan Ornelas and Nima Bencohen, from the Isla Vista Party and Campus United respectively, presented their transfer-specific goals at the forum.

All four candidates for Letters and Science senators from the Campus United party, Joshua Takeuchi, Allison Adam, Gabriella Shofet and Emily Quach, were present at the forum.

The Isla Vista Party put forth two candidates for the position of Letters and Science senators, Xochitl Briseño and Ricardo Uribe, who both attended the forum as well.

Below is a breakdown of each candidate’s response to the questions presented at the forum:

Bencohen wants to focus on expanding CLAS to upper division courses which he believes will benefit not only transfer students but all students at UCSB.

Ornelas is interested in addressing complaints raised by transfer students about the lack of social interaction fostered between them. He wants to expand programs at the Transfer Student Center to make transfer students feel more at home at UCSB.

Uribe said his platform is built upon reducing food insecurity on campus and making food more accessible. He wants to accomplish this by expanding the meal ticket program to make food available to all students.

Takeuchi said his main initiative is to set up a “comprehensive website” for student-run businesses that would allow students to gain experience that would prepare them to be competitive applicants in the job market.

Quach wants to use her experience in the External Vice President for Statewide Affairs (EVPSA) office and working for lobby corps to revamp GOLD after “being inspired by other UC’s and what their students are pushing for on their campuses.” Specifically, she wants to implement a class selection shopping cart to streamline the process.

Adam wants her first project as a senator to be reading the entire legal code so that she can “know it like the back of [her] hand.” She would also like to create an A.S. school supplies bank, similar to the A.S. Food Bank.

Shofet wants to create a website to connect students and researchers on campus to make research opportunities more accessible for undergraduate students because UCSB is “one of the world’s best research institutions.”

Briseño considers the biggest problem at UCSB to be retention. She wants to “make sure that underrepresented communities have the resources they need to attend this school” and wants to form a committee dedicated to voicing student concerns to the administration.

Briseño referenced her involvement with grassroots movements since her first day at UCSB. She wants to be somebody who “amplifies student voices.”

Takeuchi spoke about his involvement in Sigma Eta Pi, an entrepreneurship fraternity, and believes that his focus on technology will help him come up with “efficient ways to solve student issues.”

Uribe cited his work on Pride Week and in helping to put together the Drag Show this past week as an example of how he “knows diversity.”

Quach spoke about how her time in the EVPSA office gave her the opportunity to advocate against tuition hikes on the statewide level.

Bencohen talked about his involvement with the Gift of Life finding donors for bone marrow. He also spoke about his experience with the Transfer Student Association.

Ornelas cited his work on student government at the community college he attended as well as his work as a Student Apartment Complex Coordinator.

Shofet believes that dialogue of any kind is important to “bring communities together.”

Adam spoke about “constantly reaching out to the administration” and giving the university a “well-thought out plan” with input from various different communities to give projects a fighting chance.

Uribe emphasized his interest in carrying out a meal ticket program and believes that the biggest barrier to its execution is funding. He hopes to allocate the funds that A.S. has power over and work with the university to have an open dialogue about what the program would look like.

Bencohen, speaking specifically about transfer students, said that one of the biggest problems is the diminished orientation program. He wants to work with the transfer orientation staff at the Office of Student Life to expand the program and pass a resolution within A.S. to allocate funding toward the program.

Quach brought up her plan to revamp G.O.L.D., stating that she would want to work with the UCSB administration and reach out to other UC campuses to collaborate with them and learn about similar projects that they’ve done.

Ornelas referenced Bencohen’s initiative to make the transfer orientation program more comprehensive, stating that it was a goal of his as well. He said he would want to speak to the Transfer Student Alliance and the administration to talk about how the program can be better.

Briseño spoke about wanting to be the voice of the students and cited her experience in grassroot movements on campus as beneficial for that. She believes that her work in those organizations will help her work with administration to ensure that diverse communities on campus are heard.

Shofet expressed interest in creating a council with student-elected representatives for “students and faculty to actually sit down together in a room and have a conversation.” She also spoke about her experience working with Katya Armistead and Margaret Klawunn to implement kosher and halal accommodations for Jewish and Muslim students.