The Daily Nexus
Science & Tech
The Children Are Preparing for the Future
April 18, 2018 at 10:02 pm by Stephanie Pernett

As climate change continues to alter ecosystems, many organisms have had to adapt in order to overcome fluctuations in their environment.

It is important to understand the mechanisms in which organisms can respond to a rapidly changing ocean. It is an important research priority in marine sciences, especially in light of recent predictions regarding the pace of ocean change in the coming decades.

“We’ve known that these things go on in fish and other species, but we’ve never studied this in the context of climate change in the marine ecology of kelp forests,” co-author Gretchen Hofmann, chair of UCSB’s department of ecology, evolution and marine biology, said. “This project looked for evidence of rapid adaptation in organisms in response to a changing ocean, and we found it.”

The researchers took urchins from the Santa Barbara Channel and brought them into the lab. The animals were held for about four months while the females made ripe eggs, a process called gametogenesis. When they spawned and were fertilized, the investigators tested the embryos.

Their results indicate that the different living conditions of the adults had an effect on the gene expression patterns of the offspring during the gastrula stage of early development. 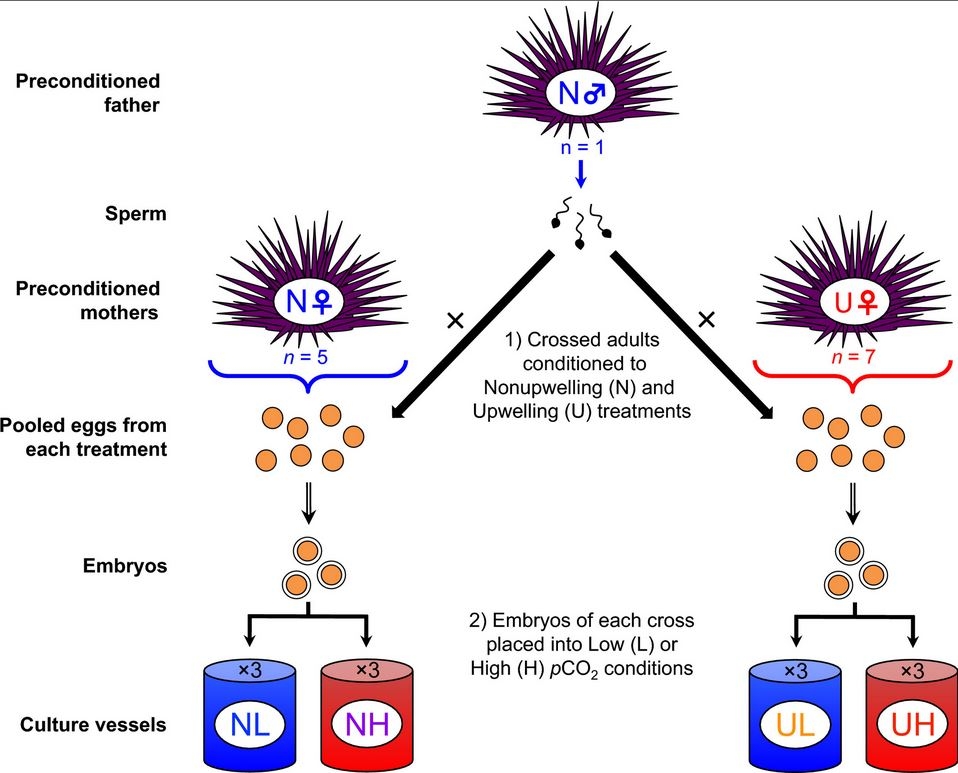 “It was more dramatic than we expected. It’s almost like the female could sense that her progeny were about to be released into some challenging conditions for early-stage development,” Hofmann said. “In response, she primed her offspring and gave them tools to face stressful conditions. It’s like she packed them a backpack of tools, including extra lipids.”

Their results produced a snapshot of how offspring responded physiologically.

“The two groups were radically different,” lead author Juliet Wong, a graduate student in the Hofmann Lab, said. “Urchin larvae from females exposed to low pH conditions had more genes turned on and were better prepared to handle stress. We were pretty surprised to see that.”

One of the mechanisms driving alterations in gene expression is epigenetic change, where the female is able to change her offspring’s genome to cause certain genes to be expressed differently.

“This work shows that a rapid adaptation response is likely possible in many organisms,” Hofmann said. “We just haven’t looked at these transgenerational or maternal effects in a climate change context before. Because purple sea urchin females can condition their progeny to experience future stress, the urchins have tools at hand to respond to changes like ocean acidification.”

While most studies exploring TGP in marine organisms have examined transgenerational effects at the physiological level, very few have explored the molecular basis of these effects.

This study explored how TGP impacts gene expression in organisms like sea urchins and examined molecular‐level transgenerational effects in marine organisms during their early stages of development.

The researchers examined the role of TGP in the response of urchin embryos to a dynamic environmental factor (carbon dioxide) and found that parental experience greatly altered progeny gene expression patterns. When the offspring of mothers that experienced upwelling conditions were raised under two different carbon dioxide levels at a common temperature, they exhibited expression patterns that might be indicative of the combined carbon dioxide and temperature conditions the parental generation experienced, including a decrease in epigenetic and metabolic processes.

This expression pattern persisted regardless of which carbon dioxide condition the progeny was raised under. Adult conditioning impacted how the progeny responded to high carbon dioxide levels, affecting ATP production, possibly for use in ion transport and ion homeostasis. These results might be indicative of mothers effectively priming their offspring to respond to similar conditions that they themselves experienced during gametogenesis.

This study highlights the importance of transgenerational effects in the response of S. purpuratus to abiotic stress and provides support that in nature, TGP may be an important mechanism by which this species copes with rapid changes in the environment.

A better understanding of these processes could make predictions regarding how S. purpuratus populations will react under future ocean conditions.

“For now, we know that female urchins are able to prepare their offspring to experience harsher conditions, more so than we ever thought, so our results are somewhat hopeful,” Hofmann said.