The Daily Nexus
Sports
UCSB Hopes To Bounce Back From Conf. Series Loss at Irvine, Faces USC Under The Lights
April 17, 2018 at 2:20 am by Jorge Mercado 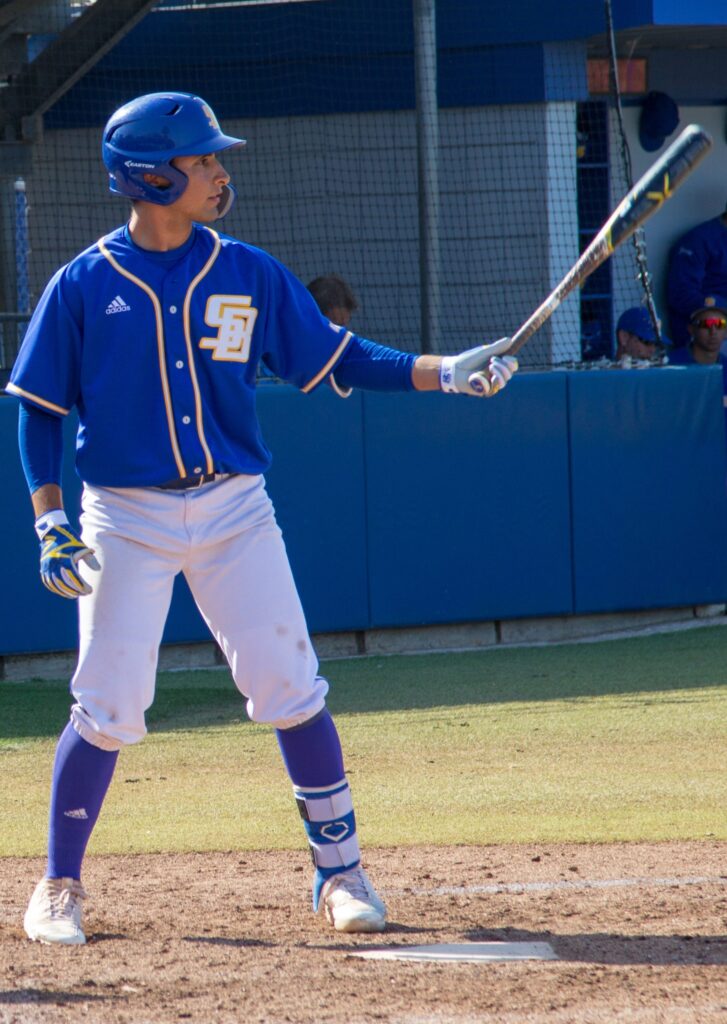 Silent preparation before getting ready to step up to home plate. Angie Banks/Daily Nexus

After dropping two of three to UC Irvine this past weekend, the UCSB baseball team will look to bounce back as it takes on Pac-12 foe, USC for its second-midweek matchup against them this season.

UCSB heads to Los Angeles boasting a 16-15-1 overall record and is currently even in conference play with a 3-3 mark. Similarly, USC hosts its opponents with a 17-14 overall mark and 6-9 conference record.

Against USC during the Andrew Checketts era, Santa Barbara has typically done well it has defeated the Pac-12 team eight out of its 11 meetings.

Last time out, however, against the Trojans, things did not fare too well for the Gauchos who were playing in the comfort of their own home and still were defeated handily 9-3. The loss stopped a four-game winning streak the ‘Chos held against USC.

In that match-up, USC busted out 15 hits and hurt starter Ben Brecht early. With one out in the third, the lefty southpaw was already relieved of duty after allowing five hits and two earned runs.

Subsequently, on the other side, USC’s John Beller finished his day tossing 6.0 innings, giving up five hits and two runs, while striking out four in just his first collegiate start for the men of Troy.

One of the bright spots on the day was junior shortstop Clay Fisher who banged out two hits on the day and brought in two RBI’s courtesy of his first and only home run of the season.

At that point in the season, UCSB went into that game one match below .500. This time they are one game above it. In general, Santa Barbara has also won five of its last seven since its last meeting with USC.

And, despite dropping two of three to Irvine this past weekend, UCSB still showed vital signs of a strong team earning its first road win of the season with a 16-hit, nine-run performance in its win on Saturday.

A midweek win against USC on Tuesday would go a long way to showing how resilient this team is.

However, in order to do that, it will need strong contributions from players like Fisher. On the season, the La Quinta native is currently slashing .271/.317/.383 and, more importantly, is back on the field defensively as he made his first appearances on the season at second base this past weekend.

Similarly, it will try to get center fielder Tommy Jew back on track as before his 0-3 outing against UC Irvine on Sunday, the sophomore was riding a four-game hitting streak and went 6-17 with three RBI’s and three doubles.

These two along with others will try to carry an offense that, through eight games so far in April, has stayed hot with a .275/.370/.416 slash line with six home runs.

UCSB will also need a strong outing from Brecht. In his last outing against LMU in last week’s midweek match-up, the Wilmette native put up a much more valiant effort allowing seven hits and two earned runs while striking out three to earn the win.

Brecht will need to put together a strong performance as he faces someone like freshman infielder Ben Ramirez who has gone 8-20 with seven RBI’s in his last five outings. The last time he played UCSB, he went 1-4.

Guys like Chase Bushor and Kaleb Murphy will also be a handful as the junior and redshirt sophomore are both batting over .300 with 10 and two RBI’s respectively. Junior infielder Dillion Paulson leads the team in RBI’s with 23 and is currently batting .248 at the plate. He went 1-3 with two RBI’s against the Gauchos last time out.

In the grand scheme of things, this game won’t mean much as the ‘Chos season continues onward. Santa Barbara needs to win the regular season conference title to make the postseason and defeating USC does not change that.

However, there is something to be said for momentum. And after earning its first road win of the season this past weekend, it would be safe to assume the Gauchos would like to earn their second before heading back into conference play, on the road, against UC Davis beginning this Friday.

UCSB takes on USC at 6 p.m. on Tuesday, April 17th at Dedeaux Field.