The Daily Nexus
Tennis
Gauchos Finish Off Perfect Home Season, Sweep UC Riverside On The Road
April 16, 2018 at 5:27 am by Brandon Victor 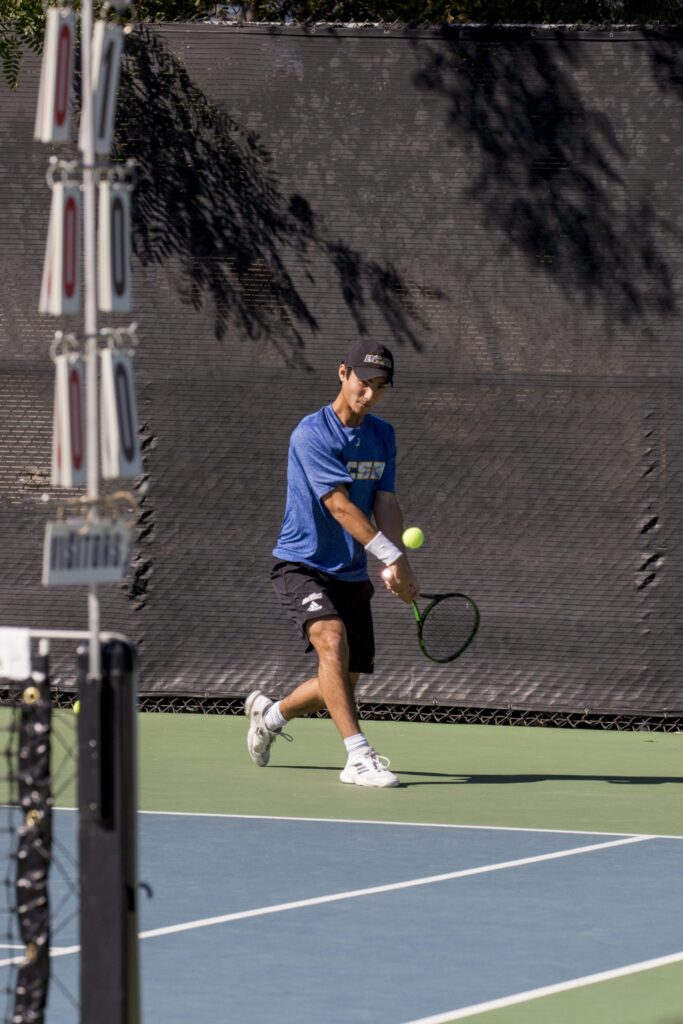 Coming into the season, UCSB men’s tennis was the preseason favorite in the Big West conference, returning most members of a roster that had won the league title last year.

But no one expected the dominance with which the Gauchos have run through the conference– following their demolition of both UC Davis and UC Riverside over the weekend, both by a score of 7-0, Santa Barbara heads into their matchup with first place Cal Poly with a combined 28-0 score through their first four conference matches.

With the two wins, UCSB has now won seven straight matches, including two road wins against ranked opponents, to improve to 15-6 overall and 4-0 in Big West play.

In the home match against Davis on Friday– senior night for Captain Simon Freund and contributor Chase Masciorini– the Gauchos easily took care of business against an overmatched Aggies squad to get their sixth straight victory.

Following an impassioned speech by Head Coach Marty Davis about the two seniors, the squad came out firing, taking the doubles point as has become the norm during Santa Barbara’s win streak.

Singles play gave UCSB an opportunity to show off their depth, opting to rest freshman Viktor Krustev and allowing Sophomore transfer Joseph Guillin to play at the No.1 spot– traditionally the spot where standout Junior Nicolas Moreno De Alboran dominates.

The moves paid off, however, as every single Gaucho went on to win their match, most doing so in only two sets. On court three, Simon Freund finished his senior season unbeaten at home with a 6-1, 6-1 victory over his opponent on court three.

Since Freund’s loss to Oregon, he has been playing inspired tennis, winning seven straight singles matches.

Juniors Anders Holm also picked up an easy victory on court four– a good omen for the team going forward considering his struggles earlier in the season.

On courts five and six, spots that have plagued this team throughout the season, Freshman Joey Rotheram and Junior transfer Hironori Koyanagi also picked up tough-fought victories.

And on court one, Guillin continued his unbelievable season with a two-set victory over his opponent on court one, moving his win total to 17 on the season– a remarkable season for a player who was unsure of his role on the team heading into the season.

With the victory, the Gauchos finish the season 11-0 at home, accomplishing their pre-season goal of finishing the year undefeated at home.

With their victory over UC Riverside on Sunday, UCSB made their second goal of winning the conference that much easier to accomplish.

The match against Riverside would prove to be a sort of measuring stick for how much Santa Barbara has improved as the season has moved on. The Gauchos had lost their first five road games this season and were up against a much-improved Riverside team that had just set a school record with their 15th win of the season.

Despite their improvement, the Highlanders were no match for UCSB, who once again won the match 7-0.

Perhaps the biggest storyline of the match occurred on court six, where Masciorini made his season debut after rehabbing an injury for almost an entire season.

After already winning the doubles point on court three, Masciorini came out firing in what could possibly be his last ever college tennis match, winning 6-1 in both sets to give the Gauchos an early lead.

Despite opting to rest Moreno de Alboran for the match, Santa Barbara still displayed the dominant brand of tennis they have become so accustomed to as of late.

Guillin once again picked up a dominant victory on court one, even blanking his opponent in the second set. After moving all the way up to court three, Koyanagi was still able to pick up a two-set victory over an opponent who had already accumulated 21 wins on the season.

The Gauchos will need Koyanagi to keep that up if they hope to win the conference, and even potentially make noise at the NCAA tournament.

The Gauchos now have the most important match of their season on Saturday, taking on a Cal Poly team that is also 4-0 in the conference and 17-5 overall on the season.

The match will be winner-take-all for the regular season Big West title, and will also determine the top two seeds for the Big West tournament.