The Daily Nexus
Tennis
Gauchos Looking To Hit Their Stride As Conference Season Comes To An End
April 13, 2018 at 5:05 am by Andrew Bishop 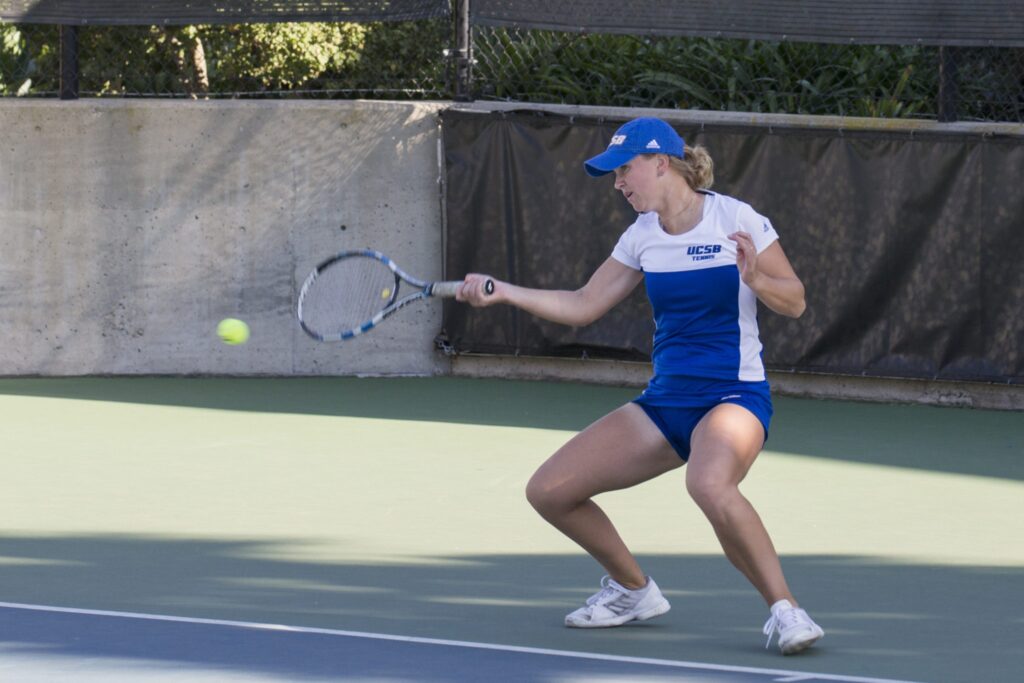 With tournament play rapidly approaching, the UCSB women’s tennis team is hoping to dominate throughout the remainder of the conference season, which will begin with two road matches against UC Irvine on Saturday and Cal State Fullerton on Sunday.

The 7-12 Gauchos had a much needed weekend of rest after escaping the worst slump of their season with a 4-1 victory against Big West rival, Long Beach State, on Mar. 31.

Prior to its win against the Beach, UCSB had experienced a turbulent month of March, which consisted of five consecutive losses and two other matches that were cancelled due to poor weather in Santa Barbara.

After dropping a match to Big West opponent, Hawaii, on Mar. 30, the Gauchos bounced back the day after to rout Long Beach State.

Despite having lacked consistency in doubles play throughout March, the Gauchos had no trouble securing an early lead against the Beach. UCSB’s duo of junior Stephanie Yamada and freshman Lise Sentenac, and its No. 40 pairing of seniors Natalie Da Silveira and Palina Duvabets both toppled their Long Beach opponents for the doubles point.

The Gauchos’ duo of senior Amanda Atanasson and sophomore Amit Lev Ari were also ahead of their opponents when the doubles point was decided.

After gathering some early momentum, UCSB continued to excel in singles play, with victories from Duvabets, Atanasson, and Sentenac, which brought the match to a close.

With their slump behind them, the Gauchos will look to tackle their upcoming conference opponents, in UC Irvine and CSUF.

The Gauchos’ weekend will begin with a match on Saturday against the Anteaters, who currently sit at second to last in the Big West with an overall season record of 8-13. Irvine has had extensive struggles against conference opponents this season, which is evident in its 0-5 record in Big West games.

The Anteaters are coming off of a recent 5-2 loss to CSU Northridge, which was the only Big West opponent to relinquish points to Irvine this season.

Their loss to Northridge marked their sixth consecutive loss, which certainly bodes well for the Gauchos.

The next day, UCSB will square off against Cal State Fullerton, which has experienced a dominant 16-4 season, with a 4-1 Big West Record. The Titans currently sit right above the Gauchos at second in the Big West, and Sunday’s match will certainly be indicative of the talent levels of both teams.

Fullerton has experienced an elevated level of play this season, due in part to exemplary play from No. 114 ranked freshman, Genevieve Zeidan.

Zeidan has been dominant in singles play this season, notching a singles victory in each of her team’s five Big West matchups this season. The Gauchos have struggled this season against highly touted ranked players like Zeidan, and it is likely that she will give them a run for their money on Saturday.

Beyond the No. 1 spot, UCSB’s match with Fullerton appears to be significantly less lopsided. The Titans have experienced just one Big West loss this season to UC Davis on Mar. 28, who the Gauchos routed 4-0 at home on Feb. 24.

A victory on Sunday could help UCSB move closer to the top of the Big West standings, and it is likely that its match against the Titans will be a pivotal moment in its season.

With the No. 2 spot in the Big West in their sights, the Gauchos will hope to leave their previous slump further behind, and hopefully secure two more wins against conference rivals.