The Daily Nexus
On the Menu
Feeling a Little Chill: Spice Up Your Life with the Scoville Scale
April 12, 2018 at 12:21 am by Morgan Bakowsky

Everyone has their favorite type of flavor. Whether it’s sweet, savory, sour etc. One of mine is SPICY. In fact, my food motto is, “If it isn’t spicy, it isn’t food.” While many people enjoy spicy food, everyone has a limit to how much heat they can take. I wanted to find out just how much I could take and quantify that by using the scoville scale. The scoville scale is used to measure the ‘hotness’ of various peppers in units of scoville heat units (SHU). I took to the grocery store to find the hottest peppers I could so I could taste them to see where my taste buds fall on the scale. 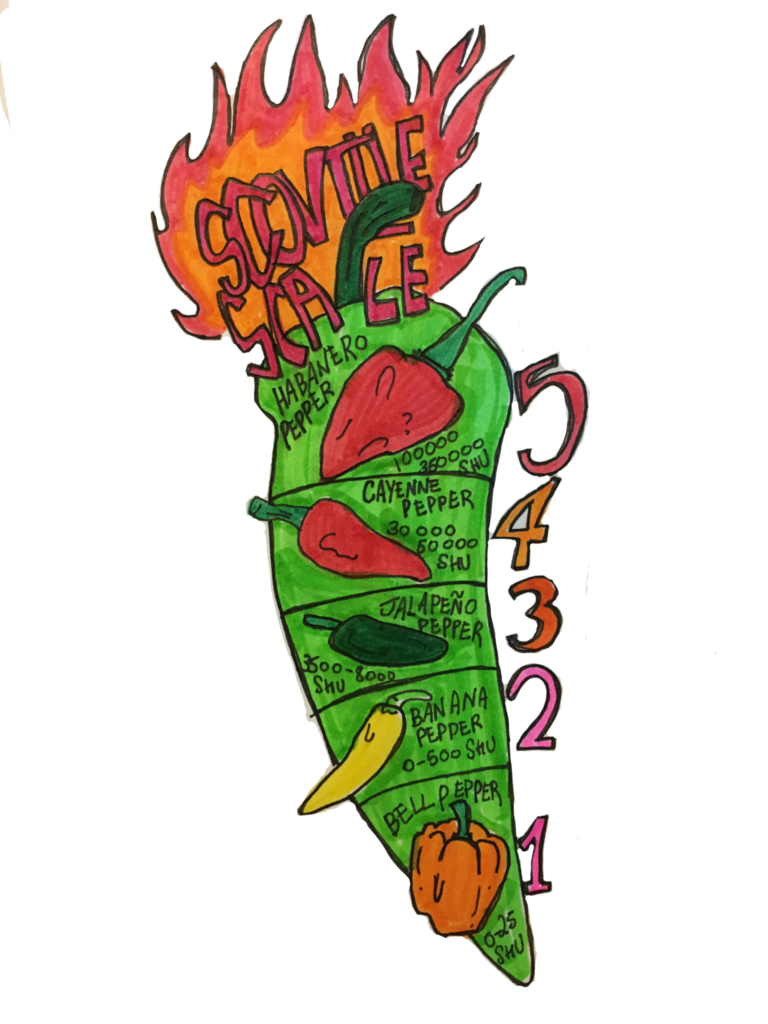 I wanted to go with only the hottest chillies but, unfortunately, most of the 10 hottest chillies in the world were all impossible to find around UC Santa Barbara. So, I picked a piece of every pepper I possibly could and here are the ones I found as ranked by the scoville scale:

Bell
This pepper is in EVERYTHING so I imagine that many people know that these are not hot at all. I picked red ones for no reason in particular and sliced them to use with hummus later. I did not find these hot at all but I still enjoyed them.

Fun fact: Bell peppers are native to the Americas and come in many colors, including a few shades of purple!

Banana
These are the La Croix of chillies; it’s as if they whisper “spicy” at you when you eat them. Don’t get me wrong, they are tasty, but honestly not very spicy. While they do not taste like bananas, they sure look like them.

Fun fact: Banana chillies are used on pizza at Blaze and in the condiment tables at various Mexican restaurants in the area!

Jalapeño
One of the more infamous chillies, the jalapeño was the first to make my mouth sting, but not very much. I eat a lot of foods that include jalapeños, pico de gallo por ejemplo. I would recommend this chili to people who like their food to have a slight kick.

Fun fact: the jalapeño has many names such as huachinango, chile gordo or cuaresmeño. Its most common name, however, stems from the Nahuatl name xalapa.

Cayenne
Okay, this one was pretty hot but still bearable for me. It took a couple glasses of almond milk to soothe my mouth and I was sweating but at least I was not crying.

Fun fact: Cayenne peppers are part of the nightshade family of plants along with eggplant and tobacco.

Habanero
Finally, my favorite chilli! This one was of course the hottest of the five and the tastiest. I was sweating, but once again it was still not the spiciest thing I have ever tasted.

Fun fact: The habanero chilli was domesticated by the indigenous people who lived in the Amazon at least 8,500 years ago!

In the end, I remained unimpressed because I did not find anything that made me cry and squirm in my seat like the overly spicy Thai food I had a few months ago. While I did not find the limit to how much heat I can take, I did enjoy eating chillies and learning a lot of fun facts about chillies along the way.