The balance in any ecosystem comes from the organisms inhabiting that community, and the Palmyra Atoll is no different.

A study led by scientists from Imperial College London in collaboration with marine biologists from UC Santa Barbara found that predators, through their fecal material, transfer vital nutrients from their open ocean feeding grounds into shallower reef environments, contributing to the overall health of ecosystems.

The researchers specifically examined the role of grey reef sharks, Carcharhinus amblyrhynchos, a predatory species commonly associated with coral environments but whose wider ecological role has long been debated.

“Our study shows that large mobile predators such as sharks may be a very important source of nutrients for even the smallest reef creatures, such as corals,” co-author Jennifer Caselle, a research biologist at UCSB’s Marine Science Institute, said. “The role of sharks as top predators is well understood, but their role as nutrient vectors is far less studied.” 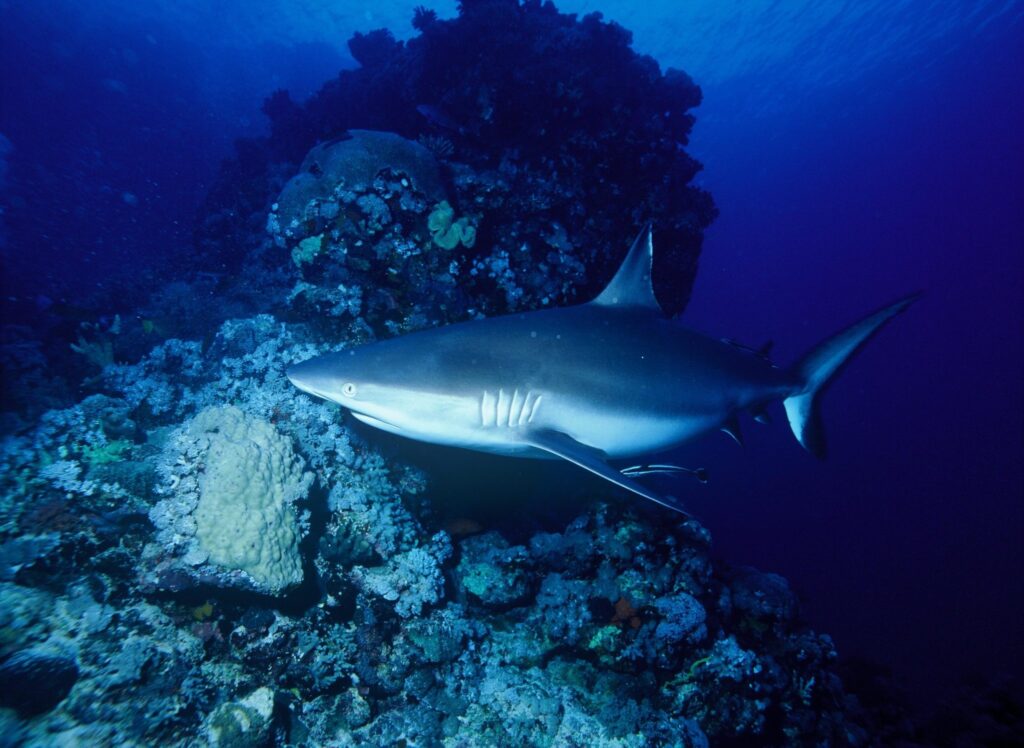 The study extends the understanding of grey reef sharks’ movements across various reef systems which is crucial for the developing effective conservation approaches and species vulnerability assessments. / Courtesy of wiki commons

Palmyra Atoll is a remote, relatively undisturbed coral reef ecosystem, and is part of a U.S. National Wildlife Refuge within the central Pacific Ocean. Because of its protected status, Palmyra has a healthy predator population, with grey reef sharks being the most abundant predator on the fore-reefs.

The grey reef shark population at Palmyra is probably at carrying capacity and may play a significant role in the transportation and flow of nutrients onto the reef and throughout the atoll. Grey reef sharks are often detected on and suggested to favor outer-reef slopes and drop-off habitats but on occasion are detected within lagoons.

Isotope analyses at Palmyra have demonstrated that grey reef sharks acquire resources from different habitats, including from pelagic and near-shore environments. However, the use of these habitats for foraging is uneven, with around 86 percent of grey reef shark biomass being derived from pelagic resources.

Mobile species that transport nutrients between habitats have the potential to impact new primary productivity and contribute to the modification of the physical environment. How mobile marine predators such as sharks facilitate this nutrient transport, how much they contribute and how this is subsequently distributed across shallow, productive reef habitats remains unexplored.

The researchers analyzed tracking data as a spatial network of movements and were able, for the first time, to estimate the quantities of nitrogen deposited around the remote unfished reef of Palmyra Atoll via the sharks’ fecal material. Results estimate that this specific population of grey reef sharks, believed to number approximately 8,300 individual animals, contributes a combined total of 94.5 kg or 208.3 pounds of nitrogen to the reef ecosystem per day, an amount that likely contributes substantially to reef primary productivity.

These research findings have implications for the scientific understanding of fragile coral reef ecosystems as well as for the ecological significance of grey reef sharks. The species is currently classified as “near threatened” on the International Union for the Conservation of Nature Red List.

“Coupled with their better-known role as predators, our study underlines another, less obvious role played by reef sharks in improving the resilience of these fragile habitats and underscores the vital importance of conserving these and other wide-ranging predators,” senior co-author David Jacoby of the Zoological Society of London’s Institute of Zoology said.