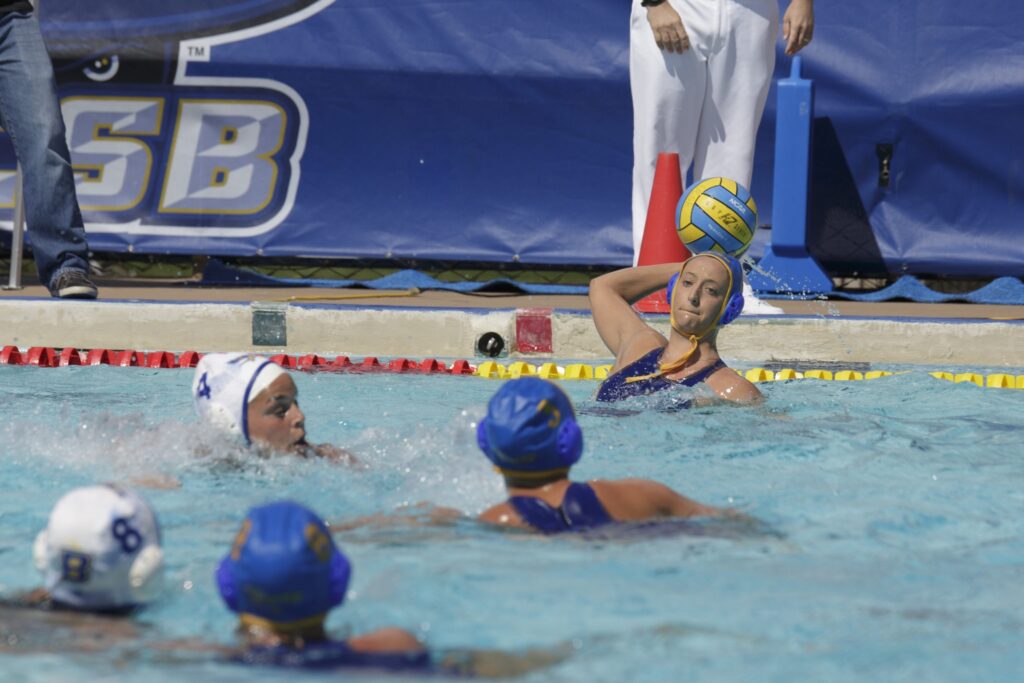 The No. 17 ranked UCSB women’s water polo team was back in action this past weekend where it played against both No. 5 Hawaii on Saturday and No. 8 UC Davis on Sunday, looking to add two more wins to their conference play record.

Santa Barbara went 1-1 on the weekend and finished the regular season with a 15-12 overall record, 2-3 conference record, as it could not find a rhythm offensively against the Rainbow Wahine but was able to rebound nicely against the Aggies on Senior Day.

The Gauchos began the weekend by facing a Hawai’i squad, who are now 20-4 overall, with a 5-0 conference record, that came in riding a two-game winning streak.

Freshman attacker Mollie Simmons won the opening sprint to start the game which gave UCSB early momentum. On the ‘Chos second possession of the game, sophomore utility Sarah Snyder was able to find the back of the net to give UCSB an early 1-0 lead over the Rainbow Wahine.

Less than 30 seconds later, Hawaii would respond with a goal from Junior utility Femke Aan, giving her 34 goals on the year to knot the game up at 1-1.

With momentum on their side, the Rainbow Wahine were able to score another goal as freshman utility Carmen Baringo netted her first of two goals on the day to give Hawaii a 2-1 lead going into the second period.

Hawaii would dominate the second period as they not only scored three goals but also did not allow UCSB to score a goal in the entire period, which put the halftime score at 5-1 in favor of the Rainbow Wahine.

In the third period, Santa Barbara and Hawaii would both score on two straight possessions each to make things interesting after two goals from Simmons and junior utility Sarah Kreiser for the ‘Chos and two goals for Hawaii from redshirt senior utility Chloe Barr to put the game at 7-3. Barr would score another goal later in the period, giving her five goals on the match and 42 on the year.

With the score at 9-3 in favor of Hawaii to start the fourth period, UCSB would look to find some offensive rhythm to build upon for their match against the Aggies, just a day later.

Junior center Emily Martin was able to end the scoring drought for Santa Barbara as she scored with just one minute left in the game. The Rainbow Wahine added two more goals in the period and the game ended with a final score of 11-4.

Just 24 hours later, the Gauchos were back in the pool as they faced a red-hot Aggies squad, that is currently 18-9 overall on the year, with a 3-2 conference record. This game was the last regular season home game for Santa Barbara which meant that it was the last time senior defender Annie Mortimer would suit up for UCSB.

Mortimer came into the game with five goals and six assists on the year and looked to get a win in her last home game for the ‘Chos.

In the first period, sophomore goalkeeper Kenzi Snyder would start off strong for Santa Barbara as she had two early saves.

On a power play with 3:54 remaining in the period, Simmons netted her first goal of the day off of a pass from Mortimer giving UCSB an early 1-0 lead.

UC Davis did not have any offensive rhythm in the first period and looked to change that as the second period started. Just a minute into the period, sophomore attacker Kathleen Schafle would tie the game up for the Aggies.

After a couple of defensive stands from both teams, Kreiser would score for the Gauchos giving them a one-goal advantage. Junior utility Annie Kutt would net her only goal of the game for UC Davis to lock things up at two goals apiece.

Goalkeeper Kenzi Snyder would later score with two minutes remaining in the second period as she launched a ball over UC Davis’ keeper but once again Schafle would score for the Aggies, putting the score at 3-3 going into halftime.

Mortimer would start things off in the second half by scoring her first goal of the game which ignited the crowd at the Newport Beach Native was not only able to put a goal away on her senior day but also give Santa Barbara the lead.

After the game was tied at five goals apiece, Simmons and Sophomore Attacker Natalie Selin would each net goals to give UCSB a 7-5 lead heading into the fourth period.

Simmons would complete her hat trick in the fourth period off of a great pass from Sarah Snyder on a fast break and after two crucial saves from Kenzi Snyder, Kreiser would put the game away with a goal that put the final score at 9-5.

Simmons led the way for the ‘Chos as she finished the weekend with four goals, three steals, and one assist.

Despite not being the biggest in the pool, Simmons continues to find ways to make a positive impact on her team.

“Personally, I am not a big player,” Simmons stated. “I have to use my mobility and speed to get goals.”

With this marking Mortimer’s last regular season for the ‘Chos, she ended up finishing in style with one goal and two assists.

“This is definitely bittersweet,” Mortimer stated. “It feels really good to go out on a win and I think that was one of our best games of the season. We all played really well together and everyone contributed which made it a great game.”

UCSB will look to continue their momentum from this weekend as they head into the conference tournament in two weeks.

Santa Barbara will head to Irvine on April 27th where their opponent has yet to be determined to compete in the Big West Tournament.