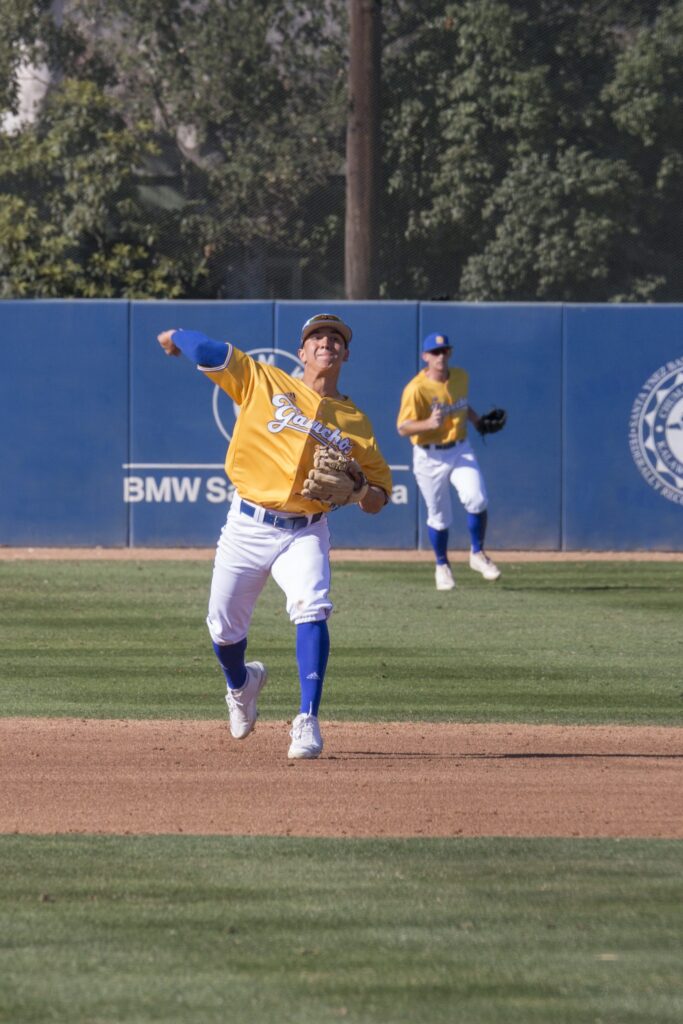 After fielding the ball, Andrew Martinez throws to first base. Dustin Harris/Daily Nexus

22 games into the season, but none have mattered as much as these next three will for the UCSB baseball team as it begins conference play against one of the more consistently tough opponents in the Big West, Cal State Fullerton.

Santa Barbara comes into the weekend match-up boasting just a 9-11-1 overall record while CSUF comes into town with a little worse 9-13 overall mark.

UCSB is the hotter of the two teams having won five of its last eight games while Fullerton has lost three of its last four.

Despite having represented the Big West in the College World Series last season, the Titans have struggled in 2018. To begin the year, CSUF was ranked No. 10 in the nation, however, a tough preseason schedule has led to its modest overall mark thus far. In their non-conference schedule, Fullerton has played No. 1 Oregon State, No. 3 Stanford and No. UCLA.

All-time, this series has been very one-sided as the Titans have amassed a 104-39 record against the Gauchos including a 49-19 record at Caesar Uyesaka Stadium. 2014 was the last time UCSB defeated Cal State Fullerton in a three-game series.

Overall, the key for the Gauchos this weekend will be to continue building off its recent success. Recently, the Santa Barbara starting weekend pitching staff has been solid as in the last five games and 27 innings they have only given up an average of 1.33 runs per game.

Sophomore Chris Lincoln has been a huge part of this success. In his first two career Saturday starts, the Rancho Verde alum has only given up 2.53 runs per game in 10.2 inning pitched while also striking out nine batters. Overall, Lincoln has a 1.93 ERA this season.

Similarly, senior Stevie Ledesma has also made a strong transition from the bullpen into a weekend starter. The SBCC transfer has posted a 0.81 ERA in his two Sunday starts while striking out five.

With success coming in the latter starts, UCSB knows it needs more production from game one starter Jack Dashwood. The freshman has shown flashes of brilliance with his strong arm, but has also shown weaknesses.

In six starts, the left-handed pitcher has accumulated a 4.78 ERA with a 1-3 record. However, Dashwood has only given up six runs in his last three starts.

This, along with a revived offense is what has helped the Gauchos hit their stride a bit. The Gauchos are slashing .291/.384/.451 as a team in March and have hit 11 dingers. This compared to a .204/.309/.295 line and one homer in February shows the positive trend for this team.

Sophomore center fielder Tommy Jew has been a big factor in this department for the ‘Chos. In the month of March, Jew has recorded a hit 11 of UCSB’s 13 games including five games with multiple hits.

Additionally, Jew has clipped an incredible .395 in the month of March to go along with 13 RBI’s and two home runs. The California native’s .324 batting average ranks ninth in the Big West while his .457 OBP ranks fifth and his .485 slugging ranks 12th.

Defensively, Jew has also been incredible in the outfield. His diving catch a couple days ago against Pepperdine saved the Gauchos in the bottom of the 10th in what would’ve resulted in a loss had the ball fell.

For the Titans, relying on sophomore catcher Daniel Cope will continue to be important. Cope has tallied hits in 13 of his last 15 batting .344 with three home runs, nine RBI’s and 12 runs. On March 12th, Cope earned his first career Big West player of the year.

Overall, this is a huge opportunity for the Gauchos to catch a struggling Titans team while their down. UCSB has not won a regular-season conference title in the Andrew Checketts’ era, and in a season where it has struggled in conference play, it might need to if it wants to make it to the postseason.

UCSB begins a three-game series against CSUF at 3 p.m. on Thursday, March 29 at Caesar Uyesaka Stadium.