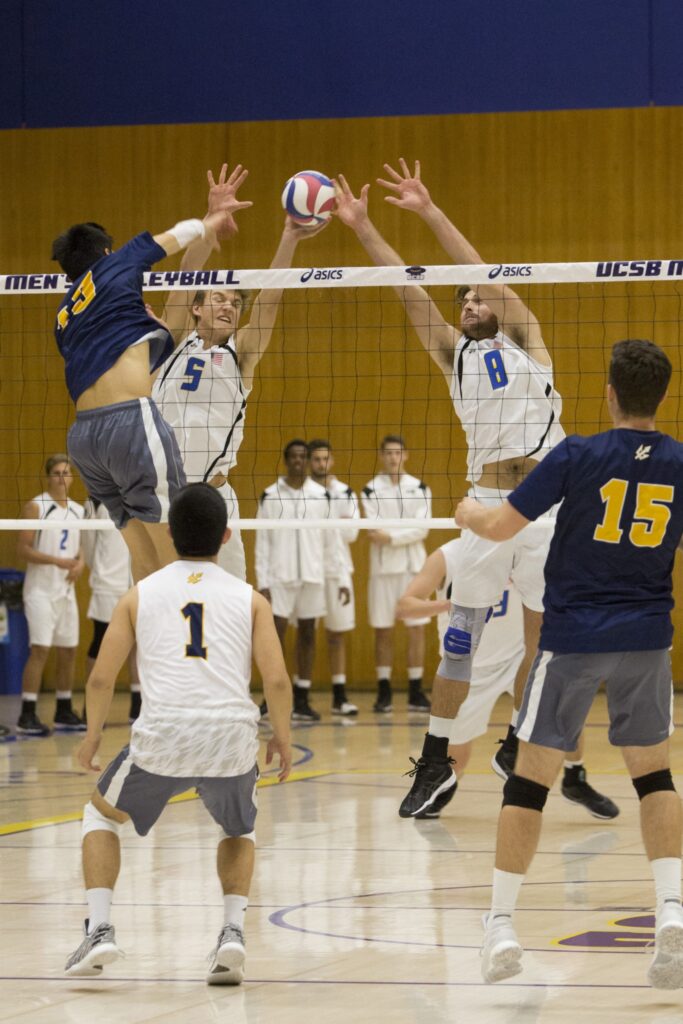 It was a rough week, but a learning experience nonetheless for the UCSB men’s volleyball program. A pair of Big West Conference matches was on the agenda this past week as the Gauchos faced off against Long Beach State, the NCAA’s top ranked team in the nation.

Unfortunately, Santa Barbara’s previous five-match win streak was cut short following its two matchups against the Beach.  Both appearances didn’t go according to plan for the thriving Gauchos, as the pair of matches resulted in consecutive losses.

The first set of match one on Thursday featured a shell-shocked visiting side in the Gauchos, as they found themselves down 4-10 quickly by their first timeout whistle. A few service errors and overall defensive mistakes on behalf of UCSB would eventually be their downfall as the set ran away from them with the final score of 17-25.

The second set of day one was by far the closest of the night as the Gauchos kept the score always within a few scores as they found themselves nearly level at 17-18. Unfortunately, the 49ers would return to their proper defensive rhythm and allow the visitors only 2 more kills to their 7 scores; thus earning them the 25-19 result and a 2-0 lead.

Early on it appeared the last set of Thursday night would be close as well once the teams found themselves tied at 3-3. However, Long Beach State had something to say about that as they then went on a 6 point run. That spur of momentum would then carryout through the remainder of the set as the hosts never lost that several point buffer. At another 25-19 result, the 49ers had secured the 3-0 sweep at home.

Day 2 appeared much more promising at first as the Gauchos would take the early 1-0 lead following a thrilling 26-24 performance.

The second set would once again then evade the Gauchos as they’d go on to lose 15-25, bringing the set count even at 1-1.

Waves of errors and never really finding an offensive rhythm would then hinder the hosts in the third set as well, as UCSB would drop another by a result of 14-25.

Ending on a high note, the Gauchos arguably played their best of both nights in their final set against the 49ers. In this one, UCSB lead for up until the halfway mark of the night. Still, the Long Beach State attacking talents of junior opposite Kyle Ensing and junior outside hitter TJ DeFalco were just too much in the end and lead their team to a closely narrow 25-20 win; thus allowing the 49ers a 3-1 match win, showing that there’s both plenty of good and bad that UCSB must still review in order to compete with the nation’s No. 1 side.

Following this pair of results, UCSB are now at a 9-7 overall on the season. In terms of conference standings, the Gauchos are now split at 2-2; this now places them tied for third in the Big West, alongside league opponent CSUN whom they’ll play their next pair of conference matchups against. UCSB also still retains its No. 12 status in the nation, for the time being.

The Gauchos next opponent will be a week from now in a regular season matchup, which will take place on the road versus UCLA on Wednesday, March 28 at 7 p.m.