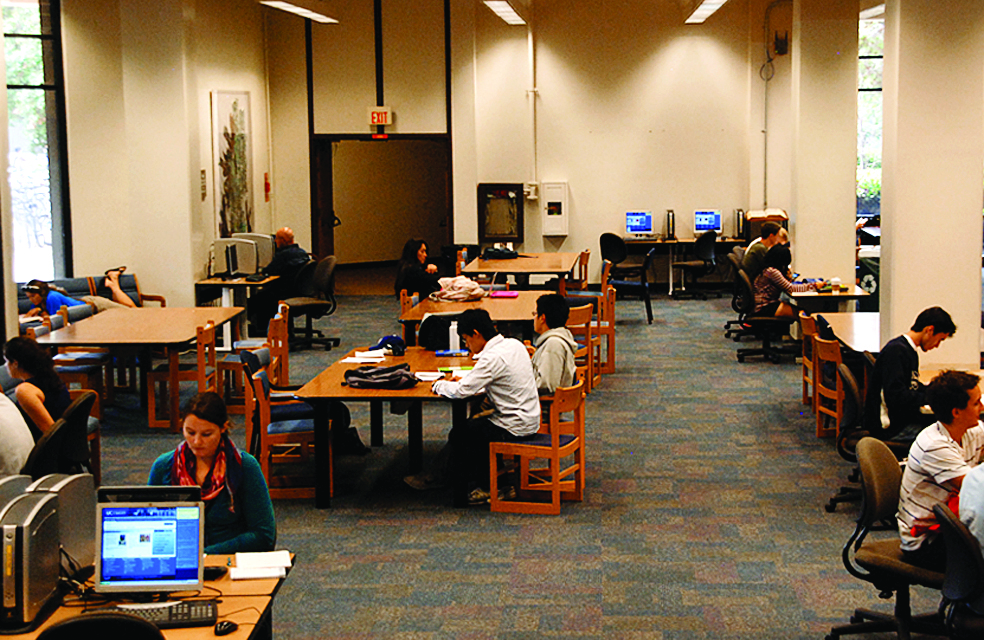 In an unfortunate turn of events, third-year history major Jamie Blake’s uninviting presence failed to prevent a large group of freshmen from invading her table on the fourth floor the library. Blake was visibly upset when speaking to the Nexus.

“I’m not sure how this happened,” she said. “I did everything right. I spread my stuff out all over the table. I gave them my most withering glare … I did everything to look uninviting, and they still sat here.”

Despite her valiant efforts, Blake’s once-empty mountain side table was overrun by San Miguel Hall’s Dinosaurs study group shortly before 1 p.m. Sunday. Friends of Blake were shocked by her inability to hold her own against the freshmen.

“Jamie has such an impressively off-putting presence. She can make it through the Arbor unscathed- even the CALPIRG people have stopped bothering her,” said fourth-year economics major Jordan Gonzalez.

Residents of neighboring tables looked on with mixed sympathy and frustration as the talkative study group occupied Blake’s table.

“Don’t they know that’s what their dorm’s study spaces are for? Or at least the first floor of the lib?” asked second-year biology major Jake Small.

“They waltz in here like it’s nothing. I live on the fucking 68 block- this is an all-day commitment. I can’t just leave whenever I want to go to DLG,” third-year communication major Katie Wilson added in between bites of a soggy kale salad she brought from home.

While shaken up by the incident, Blake has not lost hope in reclaiming her table.

“Hopefully they’ll get tired and leave soon,” she said, pausing to take a sip of her third Yerba Mate of the day, “It’s ice cream sundae night at Ortega so with any luck they’ll be out of here by six.”

Hannah Jackson will glare at you if you come near her table.

Vice Chancellor Klawunn be like hey this is California and nobody got no manners around here.