Associated Students President Hieu Le has received criticism for his methods of gathering signatures for a proposed University Center renovation project, which include not explicitly mentioning the cost of the project to students he has petitioned. 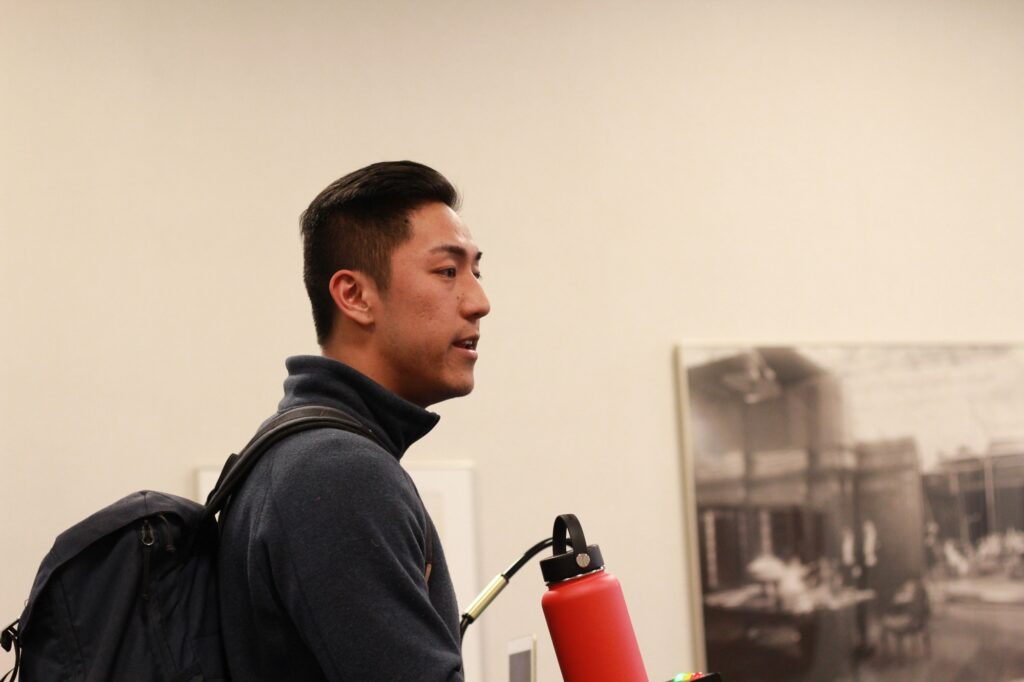 Funding for the project will come from a combination of student fees, the university itself and an alumni donation fund, according to Le. Kaitlyn Nguyen/Daily Nexus

Several UC Santa Barbara students have said Le placed a misleading sign at the A.S. Food Bank, which caused students to mistake it for a sign-in sheet. Le has also been filmed gathering signatures from students at an Isla Vista party.

Third-year global studies major Justice Dumlao said he was sent a video over the weekend that showed Le at an I.V. party, gathering signatures for the petition.

“I have a video of a Snapchat that someone took that said something along the lines of ‘president always working.’ It’s a video of the petition, and it pans up to Hieu giving a thumbs up at what looks like an indoor party with loud music,” Dumlao said.

Le denied educating students about the petition and gathering signatures while he himself was intoxicated.

He denied attending I.V. parties to discuss the petition and “doesn’t recall” whether the video itself was taken at an I.V. party.

“Our strategy process is to ensure that one, we talk to students in a way that is transparent and educate them and let them decide whether they want to sign the petition form or not,” he said when asked whether he had approached intoxicated students to ask for signatures.

The video can be viewed below.

The renovation would “address some of the longest standing needs of our student body” by adding 24-hour study spaces, classrooms for Campus Learning Assistance Services (CLAS) and would expand the A.S. Food Bank, Le said.

“Food insecurity, I’m sure you know, is one of the most pressing needs on our campus. 48 percent of UCSB students report as food insecure. The other week we reported that 2,100 used the food bank on the three days it was open,” he said.

During the week of Feb. 26, Le set up his petition in the Food Bank and students mistakenly signed it, thinking it was a sign-in sheet, according to the Food Bank Committee’s minutes from a March 2 meeting. 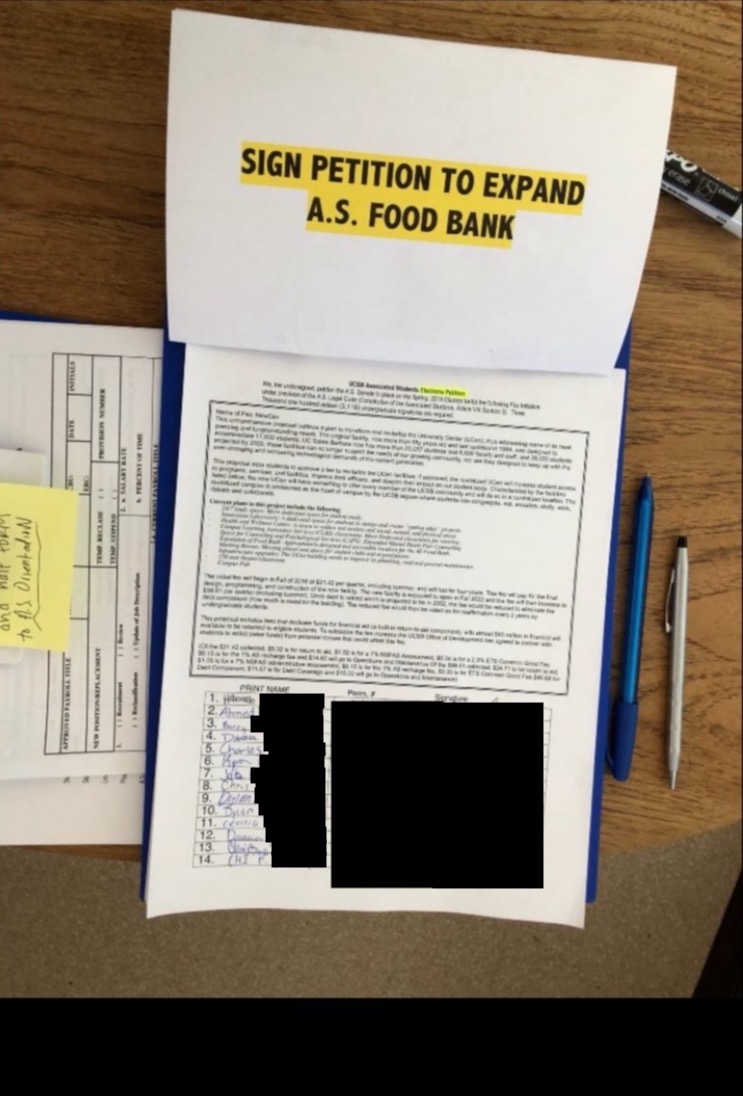 “We’ve actually crossed off all the names of the students who mistakenly signed onto that petition, mistaking it for the food bank sign-in sheet … We were able to move that sign-in sheet,” Le said. Photo submitted anonymously

“The petition was put next to the sign-in sheet which caused students to mistake between the forms,” Vice Chair Tabitha Yuen said at the meeting.

The minutes reference the petition as having been “set-up by Hieu Le at the Food Bank lounge last week.”

Le, however, did not respond when asked if he had set up the petition in the food bank himself.

Le acknowledged that the petition had been placed “next to the sign-in sheet for the actual food bank.”

“We’ve actually crossed off all the names of the students who mistakenly signed onto that petition, mistaking it for the food bank sign-in sheet … We were able to move that sign-in sheet,” he said.

The committee voted to “disapprove” the UCen expansion petition in the food bank during the March 2 meeting, meaning they will no longer allow the petition to be placed within the bank, according to first-year history major James Ferraro.

Funding for the project will come from a combination of student fees, the university itself and an alumni donation fund, according to Le.

“We’ve raised about $2.5 million on campus equities, not donors yet,” Le said. “There is an anticipation that we’re gonna raise quite a good amount, but we don’t have a certain figure in mind yet.”

Senator Alexandra Gessesse and Dumlao both said Le and his fellow students have not been open regarding fees when approaching students about the petition.

“Not only have I witnessed [this], but constituents have told me that they’re not being told the fact that their student fees are going to be increased,” Gessesse said.

“The issue is, even if we get donors and we assume that they’re going to give us $10 million, there’s still a budget that needs to be covered that would be from the student expense,” she added.

Dumlao explained the project is being publicized as expanding the food bank and improving the UCen rather than focusing on the fact that student fees will rise.

“I’ve heard from multiple people, both people who have been asked to sign the petition and … people who Hieu has been soliciting to work with him, that they have been told not to say or explicitly mention right off the bat that student fees will be raised if you sign that,” he said.

Le denied not fully explaining the petition to students.

“These facilities can no longer support the needs of our growing community, nor are they designed to keep up with the ever-changing and increasing technological demands of the current generation,” the petition reads.

The project was first proposed six years ago, according to Le.

“All three sponsors, A.S., the Division of Student Affairs and the University Center worked and consulted with students, clubs and organizations,” Le said. “The Office of Budget & Planning was the one who drafted the [current] proposal.”

“We’re addressing an overcrowded campus; students are competing against each other for spots, spots inside the classroom; people are sitting in the aisles; students are waiting two weeks to see a psychological or academic counselor,” Le said.

“Essentially, what we’re looking at is that students are competing against each other for spots, rather than we’re not addressing the issue in terms of providing access, and fair access, to each and every single one of our campus community [members],” he added.

The petition needs 3,116 signatures to be placed on the ballot for students to vote on during Spring Quarter, according to Le. The deadline to get these signatures is March 16 and as of Wednesday night, the petition has approximately 2,000 signatures.

A version of this article appeared on p. 1 of the March 8 print edition of the Daily Nexus.

Another trash article from Shomik and the daily nexus. “Draws criticism” from who? The IV party? No shit Justice is running to be their president so his criticism shouldn’t be any surprise let alone news worthy. You would have thought Shomik would have learned about journalistic integrity after his reckless leadership almost abolished TBL during last years election. Absolutely pathetic what the Nexus has turned into

I can assure you that there are more people than just IV party who are upset about this. Feel free to check out the Facebook event I created where students have been given a platform to voice their concerns.

I bet you did! I bet you also wrote half of this article. Great event, probably gonna be the crowd that showed up to console you after last years loss.

lol did hieu write this

Lol Justice is a joke. How about that Snapchat screenshot of Nawar spending student fees in a party bus?

Lol it’s been over a year and you still haven’t learned that the bus they were on was paid for by the EVPSA because she didn’t book a regular bus in time for the conference they were going to? Or are you being intentionally obtuse because you’re mad your buddy Hieu got called out?

The Daily Nexus should not be publishing the photo of the food bank sign in sheet with the names and perm numbers of the students visible. You should take that photo down or blur identifying information.

“The increase will remain an additional $21.42 per quarter until Fall Quarter 2022, at which point it will increase to a “maximum” of $99.61 per quarter.” So, $100 extra per quarter, which comes out to $400 per year for those who attend summer sessions (which are already prohibitively expensive for those who aren’t fairly well-off). That’s insane. So really, the people signing this are voting to screw over the next generation of students. How selfish. As a side note, why are crowded classrooms and CAPS being brought up as justification for a Ucen renovation? The astronomical fee increase isn’t going… Read more »

Yea fuck this kid. This is just some shit he can put on his resume.

Always hard at work to accomplish what he believes in #ThatsMYPRESIDENT

Vote for leftist student reps, get leftist governance. What can I say.