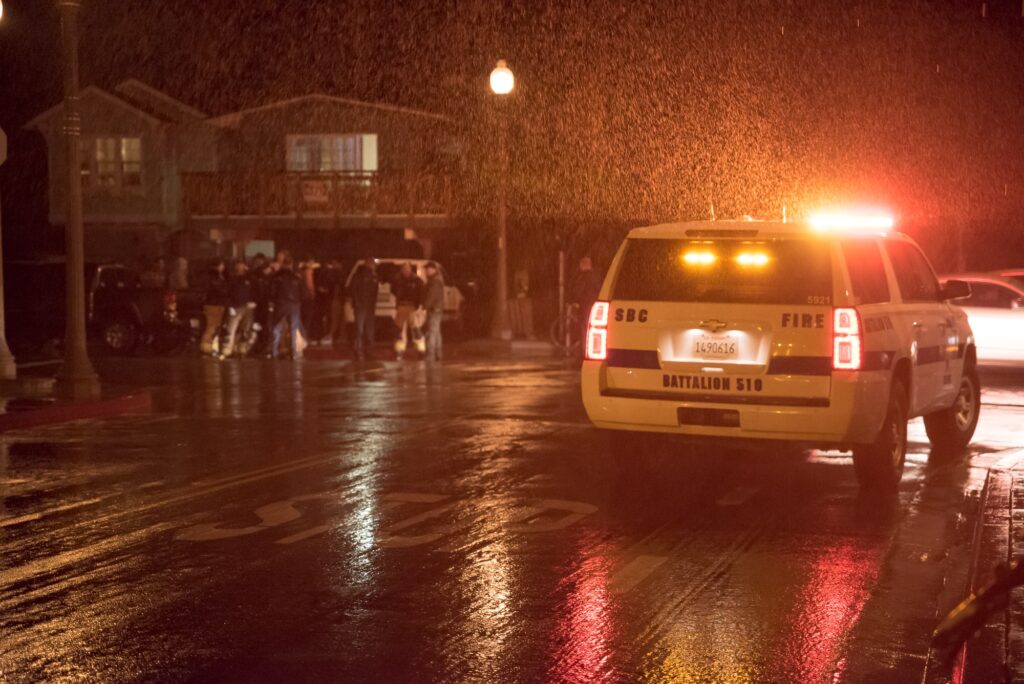 I.V. Foot Patrol, UCPD deputies, Santa Barbara County Fire and American Medical Response medics responded to an initial report of an unresponsive college-aged male on the 6500 block of Del Playa Drive at around 10 p.m., according to an SBSO press release.

The unconscious male was lying in the backseat of a vehicle, and his housemates stated he had ingested narcotic pain reliever Oxycontin and an unknown amount of alcohol. He was immediately transported to a hospital.

While officers and deputies were still at the scene, another male who had stopped breathing was carried out of the residence; a Sheriff’s deputy administered a single dose of Narcan, or naloxone nasal spray.

The victim began to breathe after receiving the dosage.

Several of the subjects transported to the hospital were UC Santa Barbara students, according to the release.

The students showing symptoms of an overdose had reportedly consumed a “blue pill.” Nine male subjects were transported to the hospital for treatment.

This story will be updated.

Well, looks like it was a great try for the Darwin award, but it turned into an epic fail. Here’s the problem: Now you got a “quick fix” for people overdosing called Naloxone. Good & cute & all, but now these idiots KNOW they can od & get brought back to do it again… FOR FREE! Congratulations to the pharma industry for giving us yet another chemically induced burden in the form of perpetual junkies & thrill seekers expecting to be rescued from their idiocy. Meanwhile epi pens & insulin, both drugs that keep productive & contributing people alive, yeah,… Read more »

Naloxone is actually very expensive. And I’m sure these people are going to get a very expensive bill. It is not free to be brought to the hospital in an ambulance. Naloxone is very important drug to have. I work in veterinary medicine and it can be used to save lives if the patient is having a bad reaction to morphine, hydromorpone or other narcotics. I used it just last week to save an Boston terrier that stopped breathing after getting an injection of dilauded.

No. Narcan intranasal spray costs $40 per 4mg dose when sold to first responders. The drug is dramatically effective, but it’s definitely not expensive in its intranasal form.

Good, then keep it for veterinary purpose, but stop using OUR tax dollars to bring idiots back to life. I love animals of all kinds, but I simple hate stupid people. These idiots were stupid people.

Everyone knows that Isla Vista’s taxes subsidize the rest of Santa Barbara County. Point 1… almost no K12 students now reside in IV, but the largest single destination of IV’s taxes is K12 education. Point 2… road funds… state and federal road funds are rarely spent in IV, which has the fewest # of road miles per resident in the County. If IV was a city, the state sharing and Measure A distribution would make IV roads and sidewalks first-rate. The County has stopped all IV cityhood efforts simply to retain the $2 million a year it siphons off from… Read more »

it is expensive when you ride off in an ambulance, but for anyone who need care and was left behind there’s no charge. I want to know if these students will be charged and suffering any consequences. I would like to think their frat will be shut down.

I have to say I agree with you on the Darwin Award. My first thought was .. “what kind of MORON takes a pill, that he/she has no idea what they’re taking??!” And a bunch of them did it, too!!

Well, now we know what kind of morons do that & where they live. Seriously, you know it’s something powerful, but you’re not sure what it is, you take it then chase it down w/ alcohol. BRIILIANT!