The Daily Nexus
Sports
March Is Here! The Race for First Continues for UCSB
March 1, 2018 at 5:10 am by Spencer Ault

Sitting just a half game out of first place in the Big West, the UCSB men’s basketball team is staring down the most important week of the season to date. Two home games, the first against Long Beach State and the second against Cal Poly, will determine how the Gauchos enter the Big West Tournament and likely what seed they’ll hold.

Only a week and a half ago, UCSB sat in the driver’s seat of the Big West. Two tough losses – the first against UC Davis and the second against UC Irvine – dropped the Gauchos behind the Anteaters and into a tie for second with the Aggies, a much more precarious position.

Those two losses were the result of two of the worst offensive performances the Gauchos, now 21-7 overall and 10-4 in the Big West, have had all year, but the team showed signs of a resurgence in their win on Saturday over CSUN.

“The game [against CSUN] was our best offensive efficiency game of the year,” Head Coach Joe Pasternack said. “I thought our guys did a great job of sharing the basketball and getting great shots on offense, which the previous two games we struggled with.”

Thursday night’s game against the Beach will be a test of the sustainability of the rediscovered offensive success for both the team and its key players. Graduate transfer forward Leland King II bounced back from a combined nine points against Davis and Irvine with a 25-point, 12-rebound performance against CSUN, and his continued production will be essential to the Gauchos’ success.

“This week, our complete focus is being able to defend and rebound for 40 minutes,” Pasternack said. “When we do that, our offense will take care of itself. When the ball is coming out of the net, we don’t get fast break points. When we can get stops and run, that’s when we’re at our best.”

The return of senior forward Jalen Canty will likely be a big help in both the defensive and offensive departments. Canty missed the last six games due to a suspension for violating team rules, but will return on Thursday night against Long Beach, giving UCSB some sorely needed shot-blocking and offensive diversity.

Long Beach State will enter the Thunderdome as losers of its last three games and in a tie for fifth place in the Big West at 7-7. The Beach has struggled to get stops in each of their last three games, surrendering at least 70 points in all of them and 80 points twice. 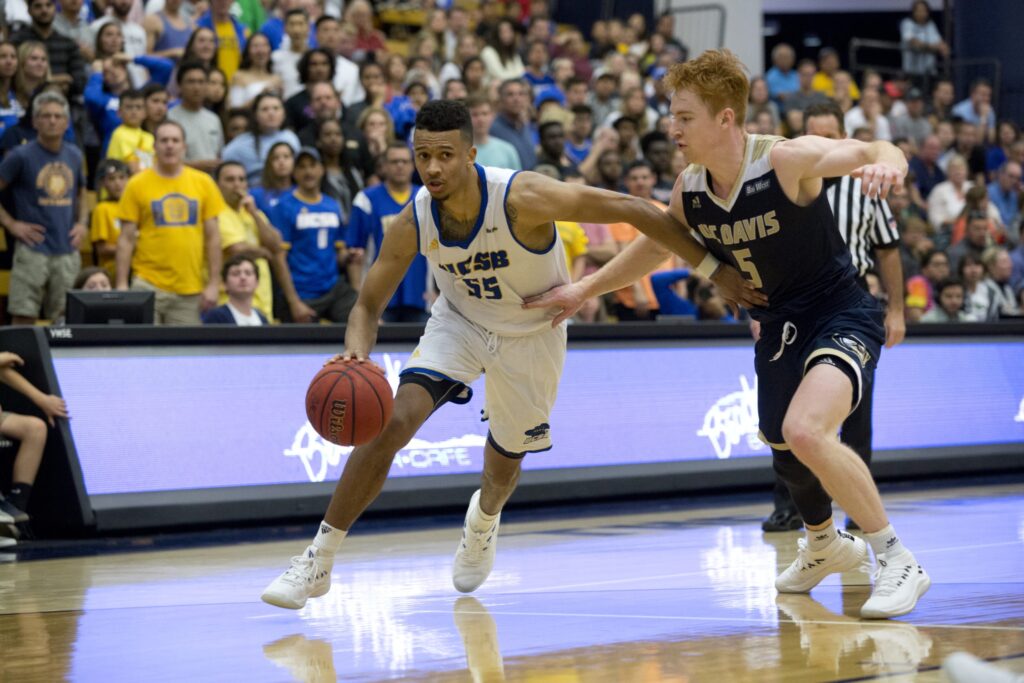 After seeing an opening, Marcus Jackson heads for the hoop. Dustin Harris/Daily Nexus

The story offensively for Long Beach State is the same as it was when UCSB traveled to the Walter Pyramid a few weeks ago: senior forward Gabe Levin is the one to stop. Levin is leading the Big West in conference scoring per game, but he doesn’t have another teammate in the top 20.

After Long Beach State on Thursday, the Gauchos will take on Cal Poly in the Thunderdome on Saturday for Senior Night. The Mustangs have just four wins in Big West play this season, but one of those came at UCSB’s expense all the way back on Jan. 4, so Saturday’s Blue-Green Rivalry matchup has the added motivation of a revenge game for the Gauchos.

As UCSB’s last game before the Big West Tournament, the matchup against Cal Poly will also be an important tune-up for the team. Working Canty back into the lineup and continuing to rehabilitate the offense will both take time, something the Gauchos won’t have much of once the tournament starts.

As evidenced by their 9-19 overall record and 4-10 mark in conference play, the Mustangs have had a rough go of things this season. That Jan. 4 win over UCSB, secured with three last-second free throws, may have been the high point of Cal Poly’s season.

All the same, the Gauchos can’t afford to overlook the Mustangs, as tempting as it might be with the Big West Tournament in sight. Guards Victor Joseph and Donovan Fields hurt UCSB the first time around and are coming off of strong games against CSUN.

Joseph is sixth in the Big West in points per game in conference play with 15.8 and has knocked down 40.9 of his three-point attempts against conference opponents. The senior guard dropped 36 points in the Mustangs’ double-overtime win over the Marauders, and will test the Gauchos’ ability to provide 40 minutes of solid defense.

A sweep of this week would give UCSB a home record of 13-1 for the year, its best since at least the 1980-81 season. Two strong games by King and Max Heidegger would also likely push the pair into third place on the list of all time UCSB scoring duos, as they currently sit just 41 points behind Michael Bryson and Gabe Vincent, who combined for 1,042 points in 2015-16.

There’s a lot on the line for the Gauchos this week, but most important is the first-place slot in the Big West.

Two wins guarantee UCSB at least a half-share of the regular season crown, an incredible turnaround for a team that finished in dead last at 4-12 last season.

The Gauchos host Long Beach State on Thursday night at 8 p.m. in an ESPNU-televised matchup, and then close their season in the Thunderdome against Cal Poly on Saturday at 7 p.m. for Senior Night.