A UC Santa Barbara student who was stabbed in her pelvis late Friday night in Isla Vista said she did not know her attacker, though she is confident police arrested the correct suspect the next day. 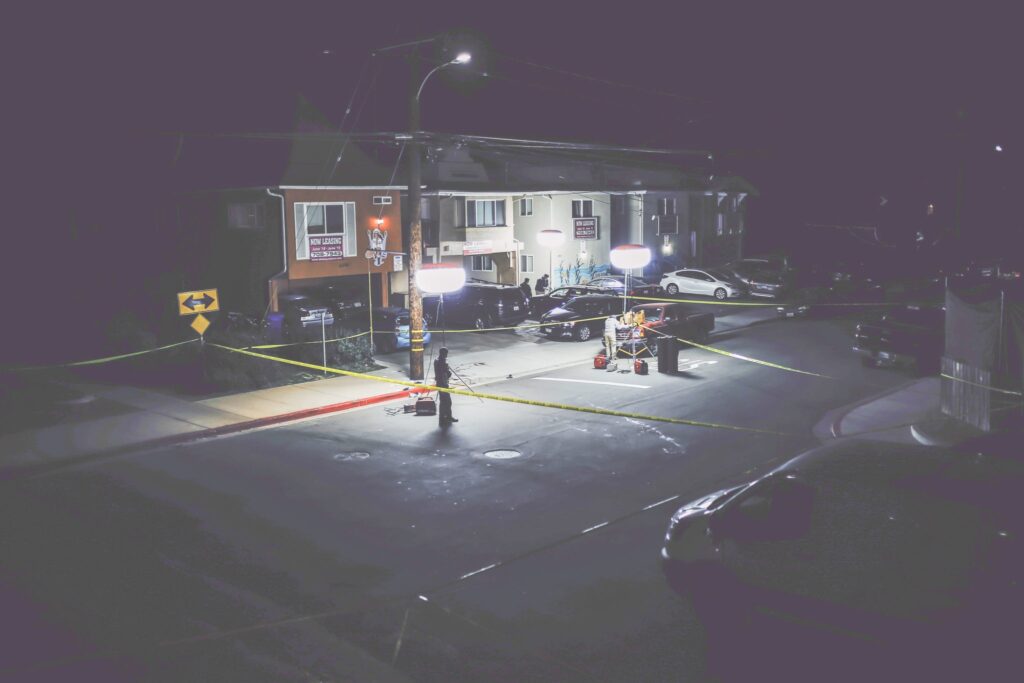 Lauren Illes is recovering after being stabbed in the pelvis on Friday night. Illes was taken to the hospital after the attack, where she underwent surgery and eight blood transfusions. Cyrus Rocky McClain was arrested for the assault. Alex Gorman / Daily Nexus

Lauren Illes, 24, lost nearly half of her blood and needed eight blood transfusions to survive the incident, she said. She is now on the way to a full recovery.

Police arrested Cyrus Rocky McClain, 19, on Saturday. McClain was charged with assault with a deadly weapon and infliction of bodily harm while committing a felony. He is being held in Santa Barbara County Jail on a $500,000 bail.

McClain was a part-time Santa Barbara City College student in the fall, but he was no longer enrolled at the time of his arrest.

Illes spoke to the Nexus about fighting off her attacker and nearly dying from her injuries. She offered both praise and criticism of law enforcement’s response, taking issue with a Santa Barbara Sheriff’s Office (SBSO) press release that referred to her injuries as “not life threatening.”

SBSO spokesperson Kelly Hoover clarified that Illes’s injuries were not life threatening at the time of the suspect’s arrest. Hoover, who wrote the release, said she was not trying to trivialize Illes’s injuries, but rather assure the community that Illes was no longer at risk of dying. Still, multiple news outlets erroneously reported that the stab wound itself did not endanger Illes’s life.

On Friday night, Illes stood with her boyfriend on the driveway of her Del Playa Drive home, watching police break up a party across the street. Illes, a third-year environmental studies major, transferred to UCSB in the fall.

She saw groups of friends pass by until she noticed a man, dressed in all black, walking around in circles by himself. She had never seen him before, she told the Nexus on Monday.

“He was looking into my house, and he had gone past my driveway into the back part of my patio, so he had crossed into my property,” Illes said.

Her boyfriend pressured the unknown man to leave, and he eventually complied, she said.

All was calm for about 15 minutes. Then, out of nowhere, the man jumped on her and began pounding her with his fists, she said.

“I didn’t know that I had been stabbed, and so I was actually trying to fight back,” she said. “I was punching him and chasing him. And then I got really, really light-headed.”

“I looked down and there was just so much blood all over me, and it just kind of kept pouring out. I was really confused because I didn’t know what happened, and then I just kind of collapsed over there in my driveway.”

While Illes lay in the driveway, her boyfriend began chasing her assailant, she said. During the chase, he started shouting at officers to attend to Illes. Before that moment, the officers across the street had been busy detaining a partygoer, Hoover told the Nexus.

After law enforcement responded, Illes was transported to the hospital. By the time she arrived, she had lost nearly half of her blood, and her bladder was plainly visible. The knife had also severed her iliac vein, which drains blood from the pelvis.

Surgeons operated on Illes for over three hours. She received eight blood transfusions and nearly lost her life during the surgery, she said. When she woke up in a hospital bed with 11 staples in her body, she felt a lot of things — but mostly lucky to be alive.

“I felt extreme gratitude,” she said. “The hospital and the care that I’ve gotten is really amazing.” She was especially grateful for one of the responding cops, whom she said was trained in dealing with on-site trauma injuries.

Within 24 hours, law enforcement had arrested a suspect for the crime.

McClain was arrested and booked into the county jail after law enforcement brought him in for questioning. Illes said she and her boyfriend both identified McClain in a photo line-up, not knowing police had already arrested him.

Illes praised law enforcement for the quick turnaround, saying she was “grateful they spent the whole night trying to find the guy.”

“I chased the attacker away right passed [sic] them yelling and they absolutely did nothing,” he wrote. “Additionally, only one police officer on the scene was trained in trauma injuries. This is disturbing given their perceived preparedness in situations like this only a couple years after the shooting.”

“They watched the attacker run away as I’m screaming the situation at them – he could have been easily caught,” he added. Illes’s boyfriend, who wished to remain anonymous, verified his identity to the Nexus.

Hoover, speaking for the SBSO, refuted his statements.

“Any inference that the deputies didn’t react quickly is simply not the case,” she said. “In fact, deputies acted immediately when they learned that a stabbing had occurred, and they worked along with detectives throughout the night to locate and arrest the individual. They immediately cared for the victim and their actions are what helped save her.”

Meanwhile, another thing stuck out to Illes. On Friday night, as she slouched onto a telephone pole, dozens of people walked by her and did nothing to help, she said. Some passersby even took photos of her.

“The world doesn’t make a whole lot of sense anymore,” she said. “I would just like people to try and regain a little bit of their humanity because the fact that I had to lie there, thinking that I was dying, and having people go, ‘Oh my god, look at this!’ and take pictures — that was so disgusting to me. That bothers me almost more than anything.”

Illes will take time off from UCSB as she recovers from her injuries. Barring infection or damaged tendons, she is on the path to a full recovery. But she still has no explanation for why she was attacked and firmly denies knowing the suspect before the assault.

“There’s something that you can expect and you see coming, but this just seems so wildly unprovoked, so out of nowhere,” she said. “There’s no way to really explain it, other than [that] it’s just really sad.”

Correction: A previous version of the story said Illes slouched onto a telephone pole “with a knife inside her body.” There is not yet evidence to indicate the knife was still in her body.

A version of this article appeared on pg. 1 of the March 1, 2018 issue of the Daily Nexus.

Just glad the victim is alright & they caught the criminal that did this. To the victim I say the following: The cops can only do what they can because of the density of the area & all that is going on. They did a great job on many fronts, including rendering the proper & needed 1st aid.
Now is the time to recover, heal & PLEASE, press the fullest charges possible on your attacker, DON NOT CUT HIM SLACK!

Fucking trolls. Homeboy tried to kill a girl for no reason. You can shut ‘yo ass up’, stupid punk. God lord the ignorant fools on the internet today.

thats right. you are a jack off punk ass MF, hopefully someone sticks a knife in you.”shut yo ass up”… you fool. Contribute to your society. You need to slapped like the bitch you are.

Thank you. I am infinitely grateful to the officers on site. They absolutely saved my life.

He should be charged with attempted murder. I think it’s strange that they say he was no longer enrolled at SBCC at the time of his arrest. The only reason this guy is in IV is because SBCC brought him here.

no, the only reason he is here is because he WANTS to be here. Hence enrolling in SBCC, not vise versa.

I really want to go to college in Santa Barbara and live in IV so I’ll apply to UCSB. Oh wait, UCSB has a rigorous application process, they require SAT/ACT scores and they only have a 32% acceptance rate. I’ll just go to SBCC, they have a 100% acceptance rate and the application is super easy and only takes 1 minute. Problem solved, now I have an excuse to move to IV and party.

How do you plan on paying your rent and other bills?

My parents will pay for it so they can tell all of their friends that their kid went off to college to a school in Santa Barbara. They will also pay for my membership to the UCSB rec cen.

So if your parents are paying for it, why not go to UC?

Honestly I don’t want to put all the effort into answering the personal insight questions, submitting my test scores, entering my course grades and I kind of slacked off in high school so I know I probably won’t get in anyway. The SBCC application takes like no effort and they admit everyone who applies within 30 minutes of submitting the application, it was just too easy. Now I am a college student and I can move to IV and pretty much do anything the UC kids do. It was pretty much a no brainer to go to SBCC.

Well have fun while you can. Good luck in life. Hopefully you can transfer and get a 4-year degree. Unless of course, you are like most SBCC kids. Since your parents are paying your way (as mine did), hopefully your parents are more loaded than my parents were and maybe you don’t have to worry about shit.

Ya my parents are pretty much taking care of everything so I’m chillin. I’m only taking 1 class at SBCC this semester so I have plenty of time to hang out in IV and party. I love college!!

1 class and you love college, huh? You having any luck with the ladies? Actually – are you a guy?

I know a handful of people from my hometown (in SoCal) that enrolled at SBCC for this reason despite a perfectly fine Community College in THEIR community. Of course they’d never admit it, but everyone knows.

Any updates on how the victim is doing and what charges are being brought to the attacker?