The Daily Nexus
Sports
Gauchos Visit Hawaii To Close Out Conference Season
March 1, 2018 at 5:07 am by Calvin Thrift 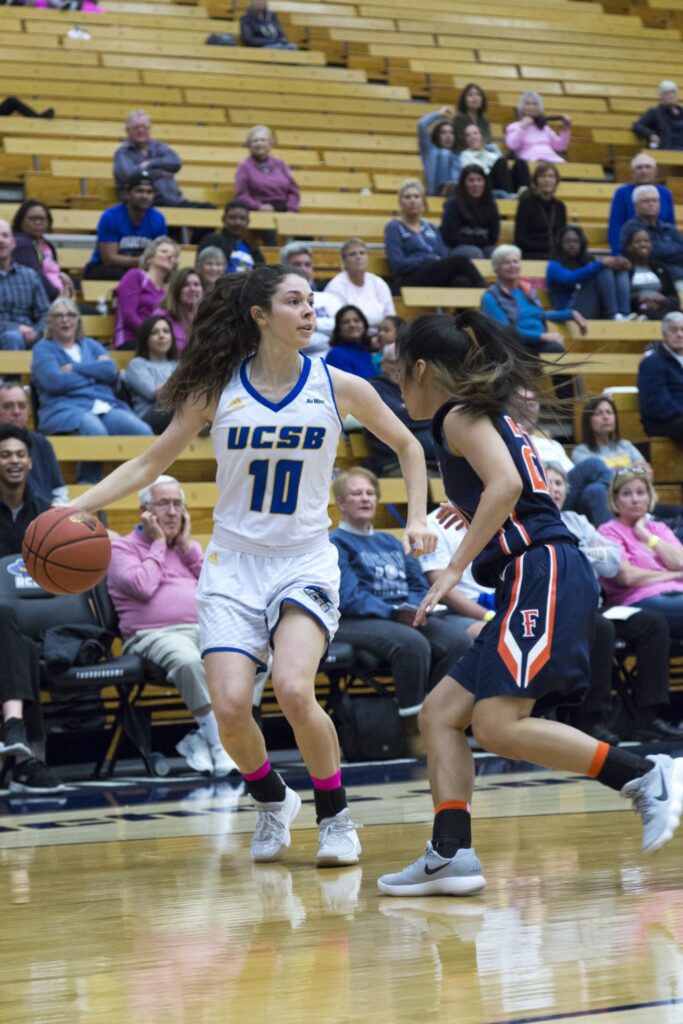 Mira Shulman looks for a teammate to pass to. Dustin Harris/Daily Nexus

In its final conference game of the regular season, the UCSB women’s basketball team will travel off the mainland and to the island of O’ahu in order to face the Rainbow Wahine this Thursday.

With the Big West conference tournament rapidly approaching, the fourth-place Gauchos will aim to close out the regular season with what would be their second win in a row before the postseason gets underway next week.

Following their recent win at home against Riverside, the Gauchos are 9-6 in Big West competition and 12-15 overall.

Hawai’i, sitting at seventh in the Big West standings, is 4-10 in conference play and 11-16 overall. The Rainbow Wahine are looking to bounce back after a road loss to Long Beach State over the weekend.

Additionally, UCSB will hope to defeat Hawai’i for the fourth time in a row, as Hawai’i’s last win over Santa Barbara took place in the 2015-2016 season.

Crucial to UCSB’s success in the Big West this season has been redshirt senior Drew Edelman. The 6’4” forward is averaging a double-double in conference play with 16.9 points per game and 10.9 rebounds per game, while shooting 60.8 percent from the field.

In addition to her offensive efficiency, Edelman has scored in double figures against Big West opponents in all but two games this season.

“I told her a few weeks ago just how proud I was of her,” Head Coach Bonnie Henrickson said. “Just being able to maintain poise and composure because she gets a lot of attention, a lot of traffic, a lot of physicality. She’s done a really good job of handling that pressure and not playing backwards because of a missed call or bad call.”

In the Gauchos’ home victory over Riverside, Edelman led her team with 27 points, tying her season high for points in a single game. Luckily for UCSB, Edelman’s other 27-point game this season came against none other than Hawai’i.

In their visit to the Thunderdome on Feb. 3, the Rainbow Wahine were outrebounded 32-26 by the Gauchos and outscored in the paint 42-27, a sign of Edelman’s significant paint presence on both ends of the floor.

A concern for the Gauchos will be whether or not they can replicate their efficient shooting against Hawai’i, since Santa Barbara shot 48 percent overall, 50 percent from beyond the arc and 90 percent from the free-throw line in the last meeting.

For Hawai’i, disrupting UCSB’s offense early and limiting Edelman’s paint touches will be key, but the Rainbow Wahine have a weapon of their own: Sarah Toeaina.

In her senior season, guard Toeaina is averaging 16 points per game and 6.1 rebounds per contest while shooting 51.5 percent overall from the field. Toeaina scored 25 points in Hawai’i’s latest visit to the Thunderdome, and the senior has drawn high praise from coach Henrickson.

“She’s a kid who really competes. She’s composed and has a great mid-range game. She gets on the offensive glass and gets out in transition, so we’ve got our hands full, we’ve got to be prepared.” Henrickson said. “We need to limit where they like to catch it, what shots they like to get, where they’re most efficient and be more disruptive in that action. She leads the league in free-throw attempts, she’s coming off a game where she had 19 against Long Beach State. That’s not the answer because now she’s scoring while she’s resting.”

Toeaina will certainly be a tough assignment for the Santa Barbara guards and help defenders; however, one of UCSB’s freshman guards, Sarah Bates, has drawn praise from her head coach as well.

Averaging 13.6 points per game in Big West competition, Bates is the Gauchos’ second-leading scorer and knocks down 43.8 percent of shots from beyond the arc.

“In a role where she’s played a ton of minutes, and we’ve needed her to do a lot of different things for us,” Henrickson said. “She’s been able to step up and answer that which has been important for us.”

With the Big West Tournament scheduled for next week, Thursday’s game marks the last of the regular season, but UCSB remains focused on what’s next.

“This time of the year we’re just trying to eliminate game slippage and understand what our responsibilities are to find success,” Henrickson said. “We want to build momentum off the other night and build momentum getting a road win and be able to get as many conference wins before the tournament since we’ve been here, which is a little milestone for us.”

The Gauchos will take on Hawai’i on Thursday, March 1, with tip-off scheduled for 9 p.m. at the Stan Sheriff Center in Honolulu.