The Daily Nexus
Sports
Gauchos Defeat CSUN in Final Road Match of the Season
February 25, 2018 at 1:05 am by Spencer Ault 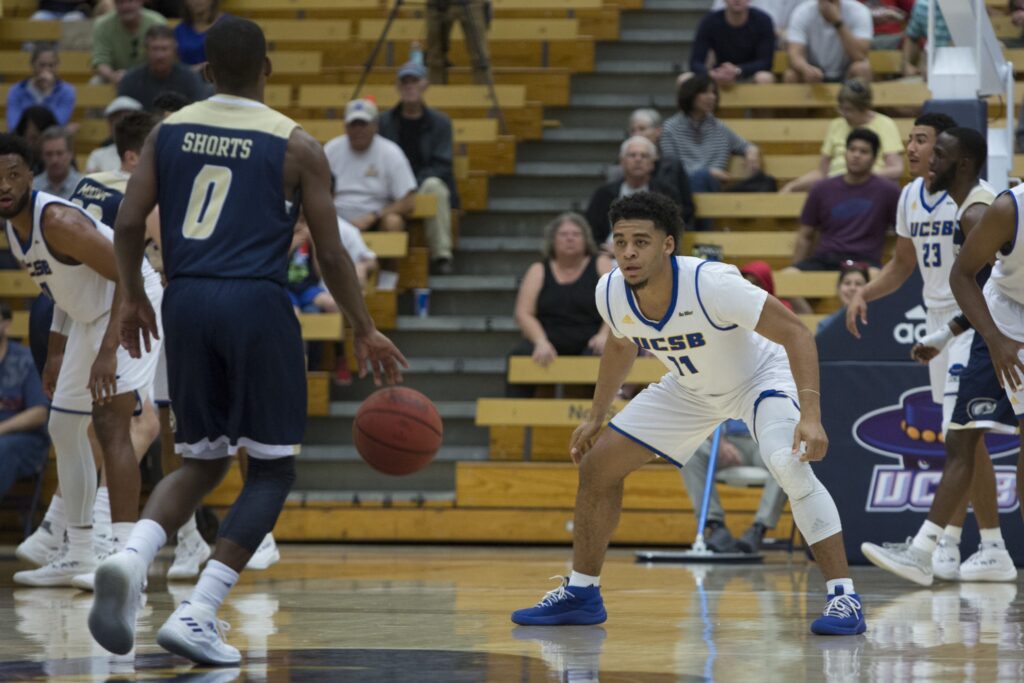 After two games in which they shot a combined 32 percent from the field, the UCSB men’s basketball team needed to get their offense back in order.

It seems they took a significant step in that direction on Saturday evening against Cal State Northridge.

The Gauchos topped the Matadors 82-73 for their first win since in a week and a half, and cracked the 50 percent mark on field goals for the first time in just as long. The win bumped UCSB back up into a tie for first place in the Big West with UC Irvine at 10-4.

Saturday night’s game was full of positive signs for the Gaucho offense. UCSB went 11-22 from three-point land, their first time shooting over 35 percent from distance since a February 8 victory over UC Davis.

In a major departure from their five total assists against UC Irvine on Thursday, the Gauchos racked up 19 assists against CSUN. That’s the team’s highest total in over a month, and representative of their rejuvenated generosity.

Leland King II seemed similarly rejuvenated. The graduate transfer put up 25 points and 12 rebounds while shooting 73 percent from the field and dishing out five assists. That last number is tied for a season-high for King, who turned the ball over just twice.

King’s strong performance Saturday night was a significant turnaround from his previous two games, in which he scored a combined total of nine points. The 6-7 forward also knocked down his first two three-pointers in the last four games.

Point guard Marcus Jackson led all Gauchos with eight assists against just one turnover, as the graduate transfer provided a stable and generous hand at the top of the offense.

Guards Gabe Vincent and Max Heidegger particularly benefited from their teammates’ generosity. Both guards notched 17 points and knocked down four threes, while putting up balanced stat sheets outside of the point totals.

The Gauchos were very starter-heavy, getting only ten points from their bench, but that didn’t matter much Saturday night. CSUN took an early 3-2 lead on a Carl Brown three-pointer, but UCSB controlled the game from that point.

King had 17 of his 25 points in the first half, and was far and away the most effective player on either team for those first 20 minutes.

The Matadors simply had no answer for the graduate transfer, who single-handedly outscored his hosts by a 9-5 margin over a five-minute stretch late in the first half.

UCSB took a 39-25 lead into halftime, and managed to expand their advantage to 19 with 16:31 to go in the second. That was as large as their lead would get, but it was more than enough for the Gauchos to close things out.

CSUN did put up a tough fight in that second half, outscoring UCSB 48-43 over the last 20 minutes.

A Matador run cut the Gaucho lead to just five with 6:50 to go, but that was as close as Northridge would get to pulling off the comeback.

Slowly but surely, the Gauchos pulled away down the stretch. A pair of three-pointers, the first from Jackson and the second from Vincent, pushed the UCSB lead back up to ten, and a broad offensive effort from the starters ensured that things never got much closer than that.

CSUN’s Tavrion Dawson had perhaps the most balanced stat sheet of the night with 22 points, eight rebonds and six assists.

Dawson was the primary offensive engine behind the Matadors’ late-game gasp, as the 6-8 senior forward poured in 16 points in just the second half alone.

While Saturday’s game was a real reversal of the Gauchos’ prior offensive woes, it was by no means a guarantee of similar things to come. For that, UCSB will have to put up points against a team that isn’t sitting at the bottom of the Big West standings.

The Gauchos will have that chance next week when they take on Long Beach State, just before they try to avenge their heartbreaking last-second loss to Cal Poly way back at the beginning of conference play.