In the early hours of Jan. 9, an enormous amount of rainfall fell on Montecito. The foothills scorched by the Thomas Fire could not absorb all the water, creating a force of mud, debris, sediment, rocks and plants that pushed its way through the Montecito communities toward the Pacific Ocean. The path of mud led to damaged homes, closure of the 101 freeway and loss of loved ones.

Following this natural disaster, UCSB Earth Science professor Ed Keller held a talk about this event in Santa Barbara’s Faulkner Gallery. On Jan. 25, Professor Keller discussed the causes and effects of this mudslide. The Santa Barbara area is particularly vulnerable to debris flows.

The huge debris flow was brought on by the severe rainfall following the Thomas Fire. These types of natural events, such as fires and floods, occur cyclically, but can occasionally sync up, adding to the effects that have accumulated over the years. The synergy of the natural disasters creates a force that fills streams, destroys everything in its wake and prevents debris basins from its job.

Due the storm earlier this year, large boulders were carried into the streets of residential areas and buildings in Montecito. These boulders made a devastating impact. Before Jan. 9, the boulders were stationary in creek beds. However, silt carried by the water from the rainfall forced the boulders out of place. Silt is fine sand carried by the flow of water, which then deposits as sediment. 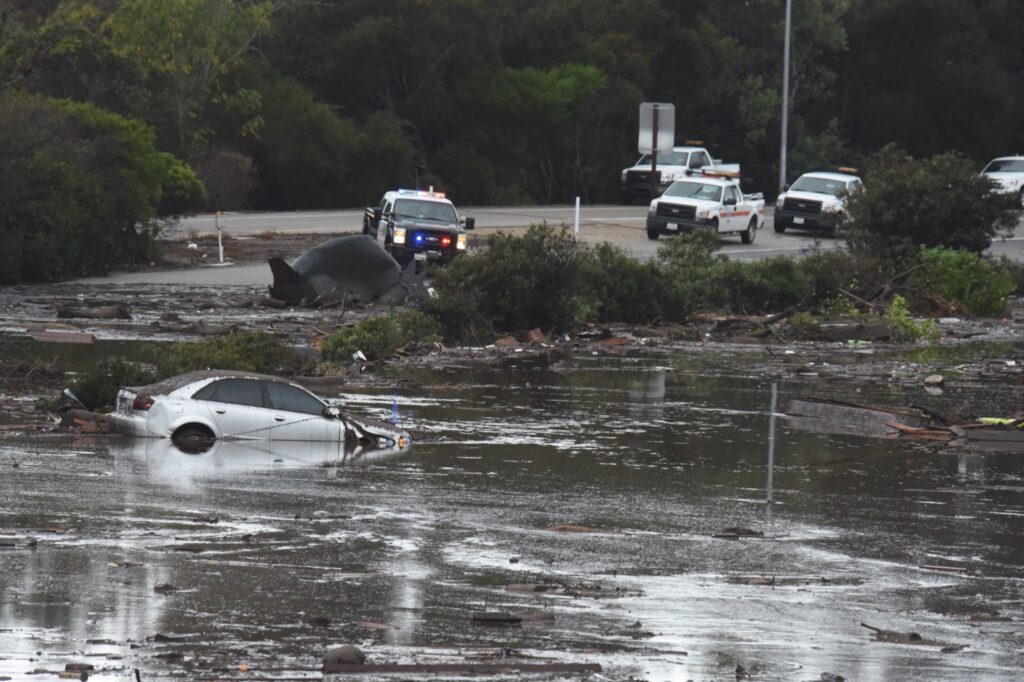 The U.S. 101 Highway was closed early January as mudslides and flooding made driving nearly impossible in locations such as the Olive Mill Road overpass. Currently, researchers are keeping an eye on Montecito./ Courtesy of Mike Eliason

The Thomas Fire had destroyed the hillside, making sediment loose due to the lack of roots holding the landscape in place. The combination of loose sediment and rainfall moved the boulders. Another contributor is the presence of a certain type of soil that absorbs water. This soil is usually common after wildfires, and it helped to speed up the flow of the sediment-rich water. The density of the sediment flow was 120 pounds per cubic foot and the boulders were 150 pounds per cubic foot.

Dr. Keller and fellow researchers surveyed the sites of the disaster in Montecito. If there is another storm, they hope to understand and predict the appearance of more boulders. Since the debris flow was more than they predicted, researchers hope to find an answer as to why. An event like this is very uncommon; therefore, it can be difficult to prepare for situations such as the one right here in Montecito. People who lived in the area almost 100 years ago typically avoided living near creeks, but the homes that were lost in the flood are built very close.

Currently, researchers are keeping an eye on Montecito and involving themselves in community outreach in those affected areas. Until the trees and plants grow back on the hillside, the soil will remain variable to its environment.