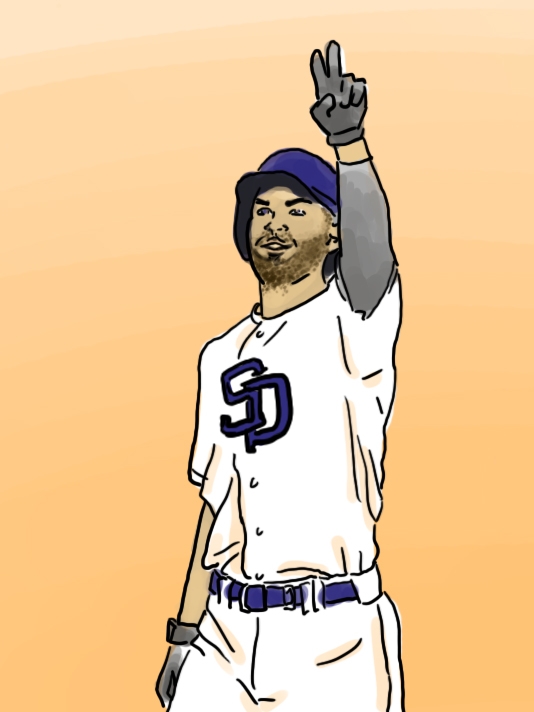 As a San Diego Padres fan, I’m excited for the start of the Major League Baseball season.

No, that was not a typo. For the first time in my recent memory, following the Padres acquisition of All-Star first baseman Eric Hosmer, I am legitimately, unequivocally excited for the season to start.

I can’t remember the last time I felt like this. Going into the 2015 season, I had a tempered form of excitement, but it was more the excitement you feel when you get the new iPhone you wanted three years prior, only to find out that they’ve made about 15 new models in the meantime.

I was pumped to finally have people with name recognition on the team, but I wouldn’t really call a well-past-his-prime Matt Kemp, an ever-inconsistent Justin Upton and a James Shields that had more mileage on his arm than my ‘03 Highlander a reason for true, genuine excitement.

Even before that, when the Padres were perennial NL West champions, I didn’t feel this energy, this searing excitement at the sheer thought of baseball season.

Those teams were solid, don’t get me wrong. With Jake Peavy at the front of our rotation and newly-minted hall-of-famer Trevor Hoffman at the back end, our dependable pitching always kept us in games. But despite all of their success, there was never a feeling we were truly competing for a title.

In reality, we were lucky when we didn’t get swept in the first round of the playoffs – a yearly occurrence for a team that lacked any semblance of a threatening lineup.

But when I got that notification on my phone in bold letters, “Hosmer decides to sign with Padres,” everything changed.

San Diego has never, in my entire lifetime, signed an all-star in the midst of his prime – that is, until now. Hosmer is only 28 and is coming off a career season in which he hit .318 with 25 homers at the plate.

Two seasons ago, this man was named the All-Star Game MVP at Petco Park, proving that perhaps he can overcome the mental mistakes of hitters in the past and actually have success hitting at Petco. As a lefty, those odds are even more likely.

The city needed this. It was about a year ago that Dean Spanos screwed over an entire city of loyal fans by moving the Chargers.

San Diego State Basketball hasn’t been up to par since Steve Fisher retired – even before that, if we’re being honest.

We need a team to get behind, to energize the fan base, to get “America’s Finest City” excited about something again.

I’m not quixotic enough to really believe that signing Hosmer will automatically catapult us into the title conversation; in fact, I’m not even sure it makes us a playoff team this year. Putting Hosmer at first pushes Wil Myers to the outfield, a position that he once said he “gets bored playing.” Myers gladly signed on to the move, but by no means is he a Gold Glover out there.
In addition, our rotation is still a mess, to put it mildly.

Half of our rotation is probably closer to being in a retirement home than an adequate major league starter. I mean, Chris Young was a good starter for the Padres … in 2006. If Kemp was the old iPhone model, then Young is an iPod Touch Generation Two. With that being said, it supports my notion that the Padres lack an ideal major league rotation.

Pundits have been all too kind in pointing this out, questioning the fit and the Padres decision to dole out over $140 million to a player who has been inconsistent at times throughout his career.

But Hosmer has two things that his stats can’t account for: leadership and experience.

He’s been to the World Series with the Royals. According to Ken Rosenthal, reviews have been “glowing” on Hosmer’s clubhouse presence. He can provide invaluable insight for a young rebuilding roster that boasts one of the best farm systems in the majors.

And because of his age, he still fits in the Padres’ long-term plans. The goal the entire time was to “compete” in 2019; at that point, Hosmer will still only be 29.

Plus, the deal is front-loaded to allow the Padres to get rid of him after five years with a much lesser salary hit.